All U.S. airports are required by law to provide travelers with service animals a “pet relief area,” where their furry colleagues can use the bathroom. Those areas are also available to pet dogs. Some larger airports have more than one pet relief area (usually, one per terminal). Most, but as yet not all, airports will tell you on their website where their pet relief area is located. [For those of you who like the details, the relevant law is 14 CFR Part 382 (Nondiscrimination on the Basis of Disability in Air Travel), Subpart D, 382.51(a)(5), which reads, “In cooperation with the airport operator and in consultation with local service animal training organization(s), you [the carrier] must provide animal relief areas for service animals that accompany passengers departing, connecting, or arriving at an airport on your flights.”]

These are our reviews of the airport pet relief areas we have been to. Getting out to them, achieving your dog’s goals and returning to your departure gate will take at least an hour, unless you’re at a tiny airport like Long Beach, or unless you’re at one of the rare airports that has an indoor pet relief area, inside the security cordon (e.g., Chicago O’Hare; Detroit; Memphis; Minneapolis; New York (JFK); Pittsburgh; Salt Lake City; San Diego; Seattle; and Washington D.C./Dulles). Those air-side pet relief areas are about to become less rare: By August 2016, most U.S. airports you and I are likely to travel through will be equipped with at least one.

Remember to empty any water bottles you had with you on your first flight before returning through security. And — need it be said? — pick up your dog’s poop! Some airports provide poop bags, but tuck one of those rolls of bags in a pocket of your pet’s airplane carrier bag and you’ll never be at a loss.

The Charlotte airport doesn’t have an official pet relief area, but it does have several great patches of grass near the large fountain outside baggage claim. The airport itself is stretched out in a line, so getting anywhere takes time, but finding the fountain is straightforward. Because it is not an official relief area, there are no bags provided. There was a fair amount of poop on the ground, especially in the grassy areas surrounding the fountain. Walking away from the terminal, there were additional grassy areas that were less used and less peopled (the fountain is a popular spot). When we were there in March, the pear trees were blooming, it was warm, and North Carolina seemed like a piece of heaven.

Here is what the Denver International Airport site says about its pet relief area: “DIA has one designated pet-exercise area located outside Jeppesen Terminal on Level 2 West, not far from Door 200.” 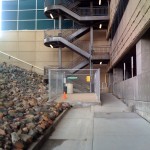 We visited this spot in March 2009, and it was grim. First, it’s hard to find, but after another visit in June, I’ve learned the secret. Follow the signs to the “Terminal West” side of the baggage claim level. Walk to Door 500 and take the elevator down to the 2nd floor (if you go down to the 2nd floor first, you’ll shlep through a lot of parking lot). The pet relief area is a small enclosure surrounded by a chain-link fence at the side of the parking garage. The area is small and gravel-lined. There are poop bags and there is a trash can. There is only indirect light, since the enclosure is tucked under a formidable staircase structure. The gate closes poorly, and a gap at the bottom is wide enough to allow a small, motivated dog to escape.

We soon opted to escape and walked along a sidewalk and then a shallow ditch flanking the parking garage to an open hillside with plenty of grass and scrub. I tried to find another alternative at the baggage claim level, but there wasn’t a scrap of grass to be found.