What was I thinking with all those Photo Friday posts of yore? “Scoop Law Saturday” has a much sweeter sound. To get you oriented: The last scoop law sign I posted was from Gearhart, OR and featured two eerie souls staring off into a mist.… Read the rest

We haven’t done Photo Friday in a while, and what better way to get back in gear than a picture of Chloe with the world’s largest chili pepper?

It’s a vast concrete sculpture in the parking lot of the America’s Best Value Inn in Las Cruces, NM, designed, as Roadside America puts it, “to entice travelers to notice this hotel rather than the ones lacking giant chili peppers.”… Read the rest

You’ve been wondering when I’d post another scoop law sign, amiright? You haven’t seen one on the blog since March, and darn it, they’re the main reason you read Dog Jaunt! Well, here’s a very peculiar one indeed, sent in by scoop law sign scout Jessica from Gearhart, an otherwise charming town on the Oregon coast:

I’m usually a little spooked by this hot-dog-limbed human, but add a hot-dog-limbed pup, and put them both in a thick mist like Warren Beatty in Heaven Can Wait  (except that Warren has articulated limbs, a neck, and a track suit)?… Read the rest

What a pleasure it was to open a recent e-mail message and see a jubilant report from reader Wanda about spending four months in Europe with her pup! Here’s The Fuzzy One, a seven year-old, 13 lb. Shih Tzu, on a Trenitalia train to Venice:

Officially, per the Trenitalia website, your pet dog must travel in a 70x30x50 cm container, but heck, it’s Italy — I suspect that by this point in their trip, Wanda and TFO had learned that there’s often a big difference between official requirements and what happens in real life.… Read the rest

Part of me applauds this scoop law sign, found in a town/neighborhood just southwest of Tacoma and sent in by alert reader Chandler — it’s uncluttered, it gets the point across, and it dodges the ever-vexing question of how to represent dog poop graphically (and yet not graphically, if you get my meaning): 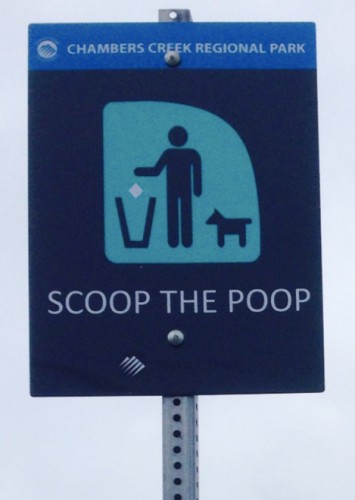 I remember first photographing these Dachshund-shaped signs (cryptically instructing dog owners to make their dogs eliminate on the street instead of the sidewalk) with my trusty Instamatic, 35 years ago. Lady, our own Dachshund, was still alive then, so I was extra-charmed — and impressed by the suggestion that it was possible to get a Dachshund to do anything she didn’t choose to do.… Read the rest

This sign is from the interpretive center at Washington’s Ginkgo Petrifed Forest State Park, which is a little odd because the last time you saw this one-armed variation on what’s usually a two-armed humanoid preparing to pick up poop with a hoe, it was telling you that the trails at Mt.… Read the rest

I’d been looking forward to visiting the Parc des Buttes Chaumont, in Paris’ 19th arrondissement, because it’s one of the few parks in the city that welcomes dogs — and by that I mean that dogs are still required to be leashed, but at least they can walk with you throughout the park (the official rules say that they are allowed on “les allées périphériques seulement,” so don’t be offended in the unlikely event that you’re challenged).… Read the rest

Bernay is in the Eure, not far southwest of Rouen, and it sounds lovely — Sabine was delighted by all the medieval buildings in the center of town.… Read the rest

Chloe’s been a bundle of nerves since the book was published (I’m talking about Bone Voyage, the new Dog Jaunt book — read all about it here and buy it here!). You know how high-strung Cavaliers can be — and by now, the Cavalier owners among you know how much I’m lying….… Read the rest