Last week I posted half of reader Mia’s report from a recent trip (“Flying with an in-cabin dog on a Delta CRJ-200“). Here’s the other half, describing the results of her searches for pet relief areas at the Ronald Reagan Washington National Airport (DCA) and the Charleston International Airport (CHS).

I looked and looked and looked at Washington Reagan National Airport for their pet relief areas at Terminals B & C but I just couldn’t find them! The one for Terminal A is exactly where their map says it is, and I’ve been there before — you just exit the terminal at the main entrance, turn left, and it is the grassy area with the bench on the left, with the pet relief area sign.

Mia apologized, but she shouldn’t have — this is clearly a situation that cries out for more, or better, signage.

According to the website, CHS has two pet relief areas, one “just outside of the ticketing lobby” and the other “just outside the baggage claim area of the terminal.” They’re keeping the information close to their chests, however — I had to search hard to find it, and Mia reports that pet relief areas aren’t shown on any of the airport maps, and she didn’t see any signs. She decided (not knowing what the website said) that there must just not be an official pet relief area:

Here’s her picture of the lawn at the Charleston airport, across from the pick up/drop off area, just before the parking garage.: 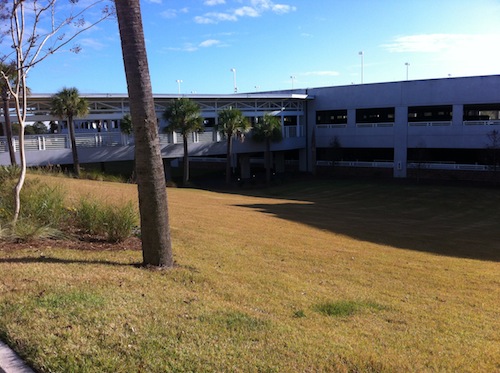 "The airport is tiny so you literally just walk across the street to short and long term parking."