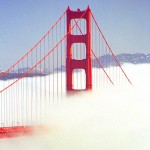 There are lots of providers of public transit in the San Francisco Bay Area. Stick with me, and we’ll work through the most prominent ones.

Since you have no idea whether you will be the first dog owner on board your chosen vehicle, it would be wisest to assume that your dog will be traveling in a carrier. The term “closed” suggests that the carrier needs to have a zipper (soft-sided carrier) or a latch (hard-sided carrier).

BART (or Bay Area Rapid Transit) operates a system of electric commuter trains from Oakland to Fremont in the north, Richmond in the south, and eastwards to East Bay cities like Pittsburg and Pleasanton. The customer service representative I spoke to at BART stated that small pets in a carrier are allowed on BART. [1/9/13 The BART website now spells it out: “BART allows pets to be brought aboard at no additional charge. The only requirement is that the pet must be secured in a container that is specifically manufactured for transport of a pet.”]

CalTrain fills in a big gap in BART’s coverage, namely, the area between San Francisco Airport (SFO) and San Jose, some 45 miles south on the Peninsula. CalTrain‘s trains are regular diesel engines and cars, and look a lot like Amtrak trains. Only service animals are allowed on CalTrain, making it the only major public transit entity in the Bay Area that does not allow small pets in carriers on board. How lame! (Please note that the link is a little ambiguous, since it only talks about service animals; I did, however, also call CalTrain and confirmed that pet dogs are not allowed onboard.)

SamTrans (San Mateo County Transit District) operates buses in San Mateo County (with tendrils of service into San Francisco to the north and Palo Alto to the south). The customer service representative I spoke to at SamTrans stated that small pets in carriers are allowed on SamTrans.

AC Transit (or the Alameda-Contra Costa Transit District) operates a bus system running “from Richmond/Pinole in the north, to Fremont in the south, to Castro Valley in the east, and west into and from San Francisco.” AC Transit’s pet policy is as follows: “You must carry pets brought on AC Transit buses in a container secure and small enough to fit on the owners lap. The animal must not be a danger or annoyance to other passengers.”

VTA (or the Santa Clara Valley Transportation Authority) operates bus and light rail systems (including the Dumbarton Express) in the Santa Clara Valley, from Mountain View and Palo Alto southwest to Morgan Hill and Gilroy. VTA has a blessedly easy-to-find pet policy: “Customers may  transport small pets on VTA buses and light rail in a completely enclosed cage or carrying case that is small enough to fit on the customer’s lap.  The animal must not endanger or annoy other customers.”