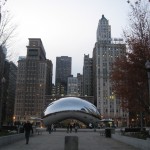 The Regional Transportation Authority (RTA) has three main pieces: the Chicago Transit Authority (CTA) operates an elevated and subway rail system (the “L,” or “El”) and a bus system in Chicago and nearby suburbs; Metra operates a commuter rail service between Chicago and northeastern Illinois; and PACE operates a suburban bus system.

The CTA allows small dogs in carriers on the El and on CTA buses, with the following provisos: the carrier must be small enough to be “carried by one individual” and it “must be constructed in a manner that ensures protection of both the animal and customer” (which gracefully suggests both a zipper and ventilation panels). You cannot put the carrier on a seat, or on the ground in a way that impedes traffic flow (so, realistically, the carrier should sit on your lap). Unfortunately, this information is not included in CTA’s website, so I don’t have a link to give you. I learned it by speaking to a customer service representative at 888-YOUR CTA (you’ll understand how wacky this seems if you take a look at the CTA website, which is otherwise incredibly detailed). [2/24/12 The CTA site now does have a written pet policy, and here’s the first paragraph: “Only small pets in protective carriers are allowed on CTA buses and trains. Carriers cannot take up seats, seating areas or obstruct pathways on buses, trains or in stations and must be able to be carried on by a single person.”]

Metra now allows small pets on trains on weekends: “Pets are allowed on weekends only. Pets will also be allowed on trains on all holidays with a Sunday schedule. Only small pets in enclosed protective carriers are allowed. Carriers will not be allowed to take up seats, seating areas or obstruct pathways on trains or in stations and must be small enough to be carried on by a single person. They must fit in a passenger’s lap or under the seat at all times.” [5/14/16 Many thanks to reader Inaya for letting me know about the change in policy. Indeed, it’s progress; with luck, and good behavior from we owners and our pets, the doors may open wider.]

Small dogs in carriers are also allowed on PACE buses. Again, this is information I got by calling PACE directly (the telephone number is 847-364-PACE).

South Shore Line uses some of Metra’s tracks to run an interurban commuter rail line serving southeast Chicago and northwest Indiana. “Small animals in carry-on cages” are allowed on the South Shore Line trains, but are “not permitted to occupy seats.” Your dog in her carrier, therefore, will need to fit on your lap.

Wendella is a privately-owned business that runs an array of boat tours around Chicago. “Only assist animals are allowed” on the Wendella tour boats.

Wendella also operates the Chicago Water Taxi (also called the “RiverBus”). The RiverBus “operates on a closed loop route on the Chicago River shuttling passengers between Madison Street on the south branch; La Salle Street and Michigan Avenue on the main branch; and River East on the main branch in Ogden Slip.” Unfortunately, Wendella’s policy applies here as well: only service animals are allowed on board.