Keri and I corresponded earlier this year, when she asked if I thought the Teafco Argo Petagon carrier might work for Flint, her “tall mini poodle with bigggggg hair and long legs.” I pointed her to my review of it, which she’d already seen, and confirmed that I thought it’d be a good match. Keri said she’d report back, and bless her, this week she did. Turns out that she chose an entirely different carrier, modified it in a fascinating way, and flew on Air Canada (which is not one of my airlines). Her report is packed with useful info, but first, here’s beautiful Flint: Groomed to the nines, and posing like a model.

Choosing an in-cabin carrier for Flint

“I had about a month before my flights to find a carrier for Flint, my mini poodle. I was extremely nervous about this because a few people said he would be too tall to fly but I had heard of other people managing with their mini’s so I decided to chance it.

In the end I let my dog choose which carrier we used. He did not like the Argo carrier (he did not want to be put into it, and with a full coated poodle it is hard to zip over his hair). I will say it was the most well made carrier I have ever seen. Even though the dimensions were bigger, it didn’t seem quite as big. The cooling tray insert bottom took some of the height as well. I did love that people could not see into the bag with the reflective tape, the multiple pockets, great strap and wonderful material. And settling down a bit into it — but as Keri said, it wasn’t his pick

The large Pettom Expandable Foldable Travel Carrier was the winner, opening with two zippered ends — this way he could walk in on his own accord, and did so immediately (though he did push his nose out when I had the zippers up instead of at the bottom). The expandable section is the clear advantage with this one which makes it into 22.5” wide which is great for long poodle legs. [Editor’s note: Here’s my review of a very similar carrier, the Smart Space by Brinkmann Pet (ignore my italicized update, since the large Pettom is the same size as the Smart Space I originally reviewed). The glory of the bag is the way it nearly doubles in size when the, ahem, pup tent folded into one of its sides is deployed.] 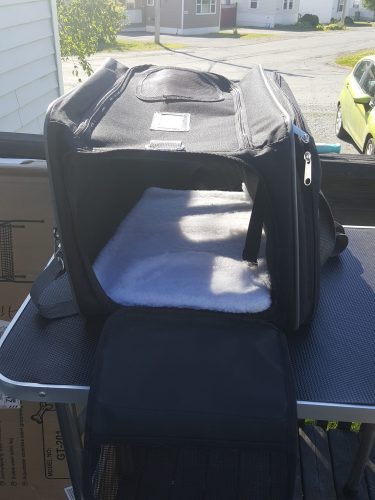 The basic rectangle of the large Pettom, pre-modification, with one end zipped open And here it is with the mesh side tent expanded (again, pre-modification) 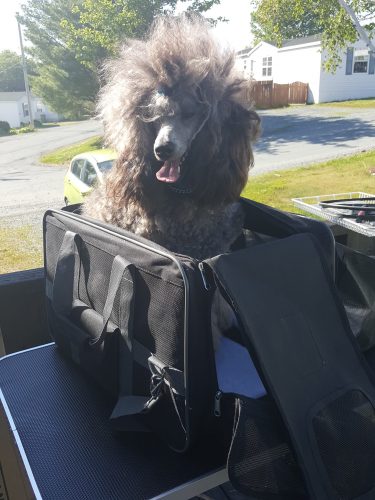 A tousled Flint, sitting up in the large Pettom, top and front end both zipped open 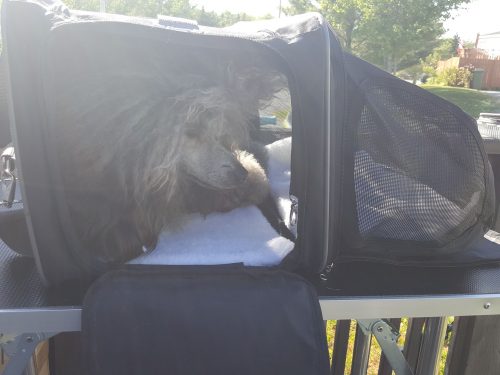 Now curled up inside, with the top zipped closed — please note that if and when he chooses, he can sprawl into that space on the right, under the mesh lean-to

This is a cheaper carrier (quite literally, it was half the price of the Argo on the Canadian Amazon) and it is obvious. The make and material isn’t nearly as nice but you get what you pay for. I did read reviews of the strap breaking but I reattached it to the metal carabiners and did not have a problem. Keep in mind my dog is probably only around 15 pounds, so be wary. It has two pockets, which is better than nothing but I had to bring a small purse with me as well. It all folds together when not in use.” 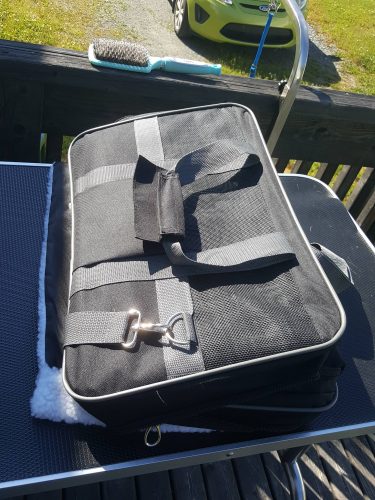 As you’ll see in my review, I proposed a modest modification to make a carrier that forms a fairly stiff rectangle a little more flexible: Temporarily remove the rods that stiffen the rectangle’s short ends, so the bag can be tilted into a lower, rhombus shape (I also suggested shortening the bag’s base so it’s not a full 19″ long). I lacked Keri’s vision and moxie:

“We very quickly removed the zippered-in supports for the expandable section as I could predict a dog getting its foot stuck while moving around. It holds its shape well without them and can fit whatever shape without them.

The Pettom is only slightly flexible and due to my paranoia I did not want to risk [the carrier being too tall for the available space]. I decided to cut the four wire frame supports around the kennel, being very careful not to cut the fabric. I had to use bolt cutters, but it worked out well! (I do suggest sanding the edges or taping them or something, since I did end up cutting my legs on the sharp points when it banged against them.) I made the cuts at 9” to be safe that it could fit. The sides now fold inwards on themselves but will stand up with a slope. Obviously when the dog is moving around they will also stand up, so it becomes more of an expandable top.” 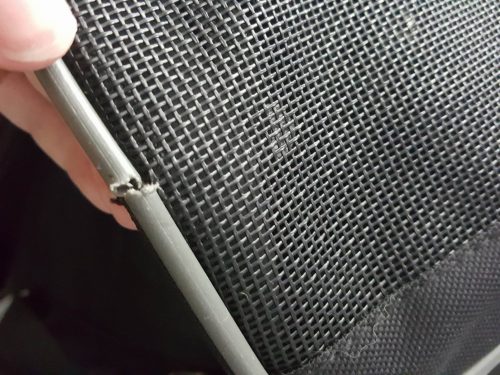 One of the cuts Keri made, showing how she carefully did not cut the adjoining mesh or fabric 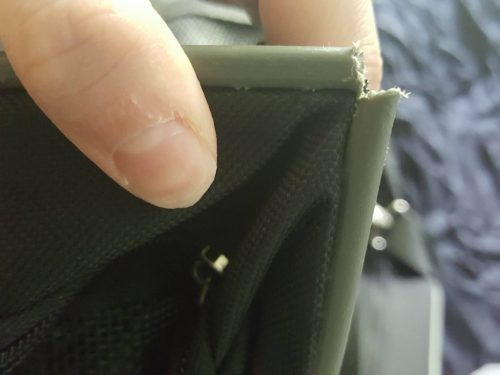 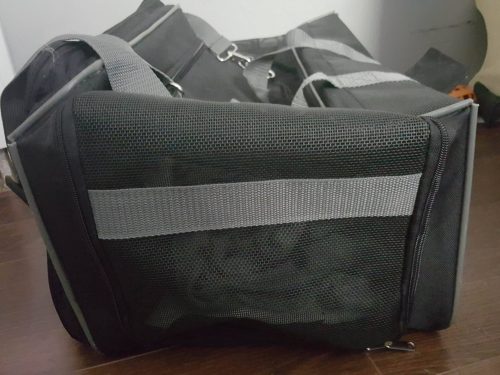 A view of the modified large Pettom, from one end; making those four cuts results in a bag that tips in at the top, when empty

“I started by tossing treats in the bag and having Flint go into the bag on his own. With a tall dog it was very important that he could scoot into the bag on his own at security even if he couldn’t stand up completely inside. We kept the bag open for the first week, then the second week did small sessions with the bag zippered closed. The next week I put him inside when he had his afternoon naps (about an hour) always keeping him at my feet when I did so and always with rewards. It did not take long for a tap on the bag to signal to enter, or to put my hand against his head to lower it and tap his butt.

He often comes to work with me (dog groomer) and has to hang out in a kennel for several hours so I was pretty confident he would be ok with a longer period of time once he fell asleep. To be extra precautious at his vet visit I brought the carrier with me and had them write me a vet referral saying they had approved it as appropriate for his size. He is a tall dog and he definitely can not hold his head up inside.”

“Our first flight was on a Embraer 175 (seat pitch 32-34”; width 18”) for close to two hours in an Economy window seat. He cried in the carrier until we boarded and took off, then he settled down and didn’t make a peep. Luckily I had no one next to me on this trip and I pulled the carrier out after take off and expanded it fully in the space between both seats (two seats per row) [here’s a seat chart, courtesy of SeatGuru]. Carrier and Flint at the beginning of their Embraer 175 flight 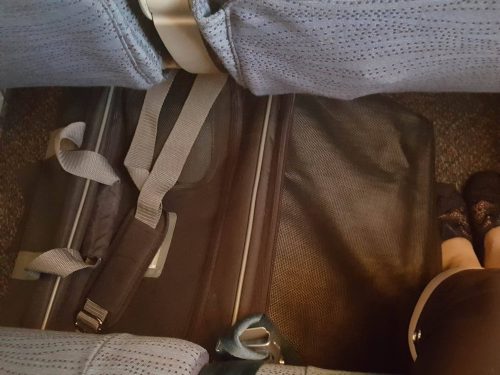 During flight, with the carrier pulled out into Keri’s leg space (on this flight, she had no seat mate), with the mesh lean-to fully deployed. I know the lean-to’s supports have been removed, because Keri told me so, but you can see that the mesh has enough body to keep its basic tent shape.

During our one-hour layover I took him to the people bathroom to walk around. There was no inside area for dogs to pee. Our second flight was on an Air Canada A320-200 (seat chart here) for close to five hours. Again he cried until we took off then settled in without a peep. I decided to upgrade to a window seat in Preferred Seating for extra legroom (seat pitch 35”; width 17.8”) because the plane was full. This fit the carrier better length-wise so I opted to push the carrier back as far as it would go then tilt it slightly so I could pull out the expanded section to fit the sides of the plane. 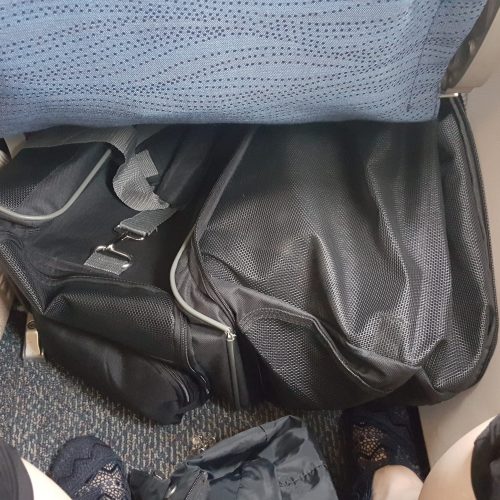 And then, during flight, with the pup tent half-deployed

Our first return flight was about four hours long, in an Economy seat on a Embraer 190 (seat pitch 31-33”; width 18”; seat chart here). I turned Flint’s kennel horizontally as the person next to me put their carry-on up top and didn’t mind the carrier going into their under-seat space an inch or two (no bar under the seats to block it). I opened the expandable section (keep in mind I did not unzip the expand or pull the carrier out until after take off, and I put it all back before we started to descend) and had it resting over top of my feet. I didn’t get a photo of it expanded over my feet because it was too dark. 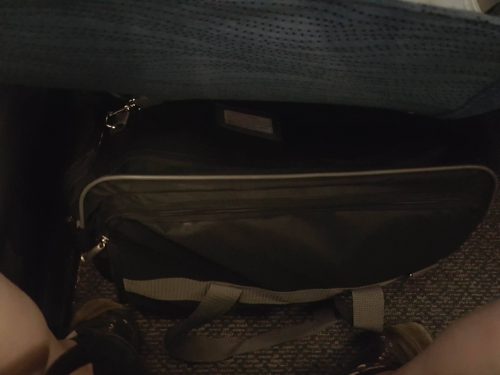 Flint’s large Pettom, loaded horizontally this time, under an Economy seat on an Air Canada Embraer 190; as Keri says, after take-off, she unzipped the mesh pup tent and let it  (and Flint) occupy her foot space

Another layover, and another walk around the human bathroom before boarding our final flight, close to two hours long in an Economy window seat on a Bombardier Q400 (seat pitch 31”; width 17”; seat chart here). This was definitely the smallest space we encountered and I was not able to expand Flint’s carrier. You can see from the photos that it took up all the room even closed. If it had been a longer flight and if it wasn’t a red eye I would have wanted to upgrade to more leg room.” 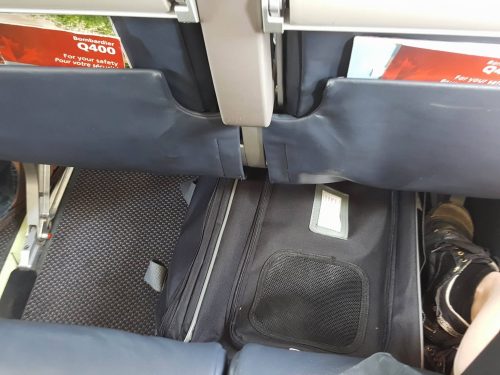 No room for expansion on an Air Canada Bombardier Q400. Keri had a seat mate on this flight; she took this picture after they left.

I find this report very exciting. The Smart Space (the clone of this bag that I reviewed) was very appealing, particularly for a really long flight, but my modifications were too timid to allow it to flex around under-seat obstructions. Keri’s bold approach worked well: “Overall, cutting the supports on the bag proved to be a HUGE benefit. I had no issues sliding it under any of the seats with this alteration but I do think it would have been an issue if I had left it as it was. Happy traveling with your long legged pooches!” I’m pleased that I never got rid of my Smart Space carrier (it’s no longer available, apparently — here’s that Amazon link for the large Pettom again); once I’ve imitated Keri, it will be a great option for international travel. So many thanks to Keri for her photos and write-up!!