As I’ve said before, it’s easy to travel with a small pet dog (say, under 10 lbs.), and it’s pretty easy to travel with a pet Chloe’s size (she has variously weighed 13-16 lbs., and stands 12″ tall at the shoulder). But what about pets weighing more than 16 lbs., or measuring more than 12″ tall at the shoulder? This week, reader Amy reports on making the extra-large SturdiBag work for her tall Miniature Poodle, with some useful modifications and a back-up strategy. [You’ll recall that reader Keri reported last week about traveling with her tall Miniature Poodle in a heavily-modifed large Pettom Expandable pet carrier — it turns out that Keri’s Flint and Amy’s Calvin are littermates! What a small, small world.]

Amy and Calvin traveled to Utah to visit family, and I’ll lead off with some of the gorgeous pictures she sent: 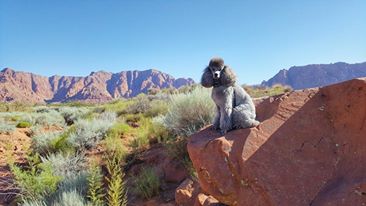 I asked Amy what park she was in, and she said “believe it or not, that is just the scenery in UT! Although we were close to Snow Canyon State Park.” 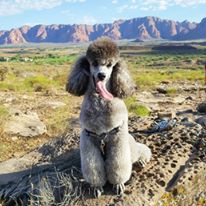 That tongue! That view! 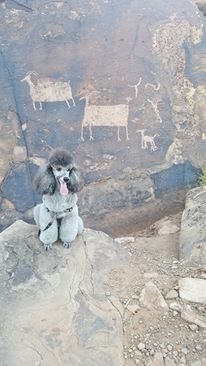 Briefly wondered if the tiny petroglyph is a Miniature Poodle, then got a grip on myself and thought, “Petroglyphs! Why have I not been to Utah?!” 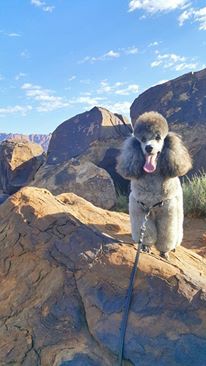 Last in this batch of pictures of beautiful Calvin in beautiful Utah. Amy says that the southwest corner of the state is particularly amazing.

“I [traveled to Las Vegas and back] with my (large) miniature Poodle in an XL SturdiBag. Calvin is 16-16.5” at the shoulder and about 17 lbs. I had a large SturdiBag folded into my carry-on just in case I got any grief at the airport because of the size of the XL. I had also replaced the rigid bottom piece and the soft pad with the ones from the large-sized bag, so I could switch them easily If I had to. I was never questioned about the bag, and quite honestly I don’t think most of the airline crew even noticed I had a pet bag with me.

I flew from Providence, RI to Las Vegas with Delta. [Given the trouble a lot of Dog Jaunt folks have had with Delta, I asked Amy about how her flight reservation conversation had gone. Her experience was good: ‘Delta didn’t grill me at all. In fact, I had to ask them about the carrier size. I told the person booking my flight for me that I would be travelling with a large small dog and a larger soft carrier. The person on the phone told me that as long as it would smoosh under the seat it would be fine.’ Their first flight was on a Delta MD-88, and they were] in a middle seat for part of the flight which was a little tricky to maneuver the bag into. Once it was between the seats it was fine, but actually getting it between the seat I’d be sitting in and the seat back in front of me was a squeeze.

On the way there we had a stopover in Atlanta, and I was able to leave security and take Calvin potty outside. Although I never found a designated pet relief area, Calvin peed on some decorative plants (oops!). [Amy & Calvin’s second Delta flight, from Atlanta to Las Vegas, was on a 737-700, and also went smoothly.]

On the way home I flew Southwest due to a computer problem with Delta (my flight was significantly delayed and I didn’t want to chance further delays with Calvin in tow so I bought another ticket home). A Southwest gate agent stopped me as we were boarding, but only to make sure I had a pet bag ticket on Calvin’s bag. Southwest has an open seating policy, so our first leg was a middle seat [on a Southwest 737-700 series plane], but the XL bag fit easily and he had plenty of room. [Amy’s second flight was also on a 737-700, and from the pictures, it looks like they had a window seat, and again, sufficient room.] 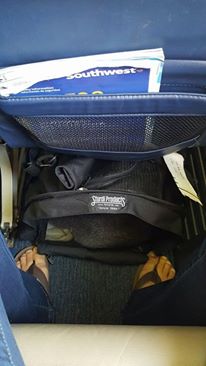 Calvin the tall Miniature Poodle, in an XL SturdiBag, on a Southwest 737-700 — that ‘s a darned good fit. 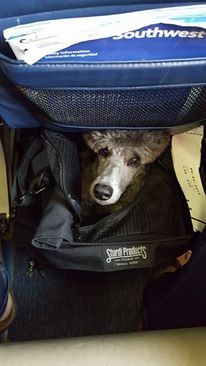 Peeking out of the top hatch

We landed in Chicago (Midway) where I had time again to take him out of security to potty. There is a fenced pet area outside which is all concrete. Not very inviting for dogs. There was, however lots of grass and trees around and he was able to potty comfortably. [Here’s a post about the outdoor pet relief area at Chicago’s Midway airport; Amy describes the situation admirably.] We made it back through security very quickly and boarded our last flight home to Providence. There is also a new indoor pet relief area in the Providence airport.

The trip was great, and Calvin flew very very well. He had a long walk the morning of our flight and I withheld breakfast, although he did get some treats in flight. I’d definitely use the XL SturdiBag again, but I will always carry on the L with me, just in case.”

Thank you so much, Amy, for all of this info, and for the spectacular pictures of Calvin in Utah! I am tagging this post so Amy’s in-flight pictures show up in Dog Jaunt’s collection of pet carriers on planes, in case folks need to show airline agents an XL SturdiBag in action on Delta or Southwest.

I particularly like Amy’s modification of the extra-large SturdiBag (replacing its hard foam “floor” and soft pad with the ones from the large-sized SturdiBag that she carried as a back-up). The substitution effectively shortens the XL SturdiBag from 20″ long to 18″ long, and if she had to swap in the L SturdiBag, the same “floor” and pad would fit. Please note that her Plan B was workable because she sized up her dog, so to speak, and decided that although he’s tall (his 16″ shoulder height is 4″ taller than the optimal height for the 12″ high large SturdiBag), much of his height is in his legs, and he likely curls up into a small bundle. A dog’s height and weight are significant, when choosing a carrier, but sometimes they don’t tell the whole story.