I’m updating this post yet again. It was first published on 10/5/11, and in late February 2013, reader Monique pointed out that the carrier I reviewed has apparently been replaced by one 2 inches shorter — 17″ long instead of an ungainly and, really, unworkable, 19″ long. That’s an intriguing size — not so much shorter than the large SturdiBag Chloe uses (18″ long) that it would cramp her, yet short enough to fit sideways under many airline seats, potentially allowing its pop-up “tent” to work during flight. The old carrier (the one reviewed below), however, still appeared on the Costco site (until this week!), so Monique and I scratched our heads over whether there truly is another, smaller version of it. The only thing to do was order it and see, so I did. It is indeed smaller than the one I originally reviewed, and for many owners of small pets, that’s cause for celebration.

For me, not so much — the carrier turns out to be 17″ long overall, perhaps, but that includes an end pocket and some generous measuring. The available internal space is only about 15″ long (the inside space is also 10″ tall and 9″ wide, much smaller than the measurements Amazon provides). That’s just too small for a 13 lb., 12″ tall dog who’s about 16″ long from neck nape to base of tail. If you have a smaller dog, though, this carrier would be a very appealing choice. Same issues and workarounds as described below, except that the side braces for the pop-up tent really do need to be Velcroed into place on the small carrier. The overall exterior height of the carrier is only 9.5 inches, though, so less squashing will be required. The overall width (with the pup tent closed) is 11 inches.

With the pup tent open, the carrier gives your pet a total of about 17″ by 15″ to stretch out in. The height varies from the 10″ of the main compartment to the 6.5-7.5″ of the pup tent (its roof slants). That’s a generous space, and would make all the difference on a long-haul flight — and like I say, with a carrier only 17″ wide (on the outside), you’ll be able to position it left-to-right under your seat, then open out the pup tent into your foot area once you’re underway. If you have a dog who weighs, say, 10 lbs. or less, and is 10″ at the shoulder or shorter, think about adding this carrier to your collection. At just shy of $70, it’s not a big investment.

Noemi, a friend of Dog Jaunt’s Facebook page, posted a picture of a new pet carrier sold by Costco and asked if I’d seen it. I hadn’t, and I was totally intrigued: The size looked plausible — a little long, at 19″, but otherwise about the same size as the large SturdiBag I love so much — and the side of it opens like a tent to almost double the available space. I ordered one, and it arrived about a week ago. 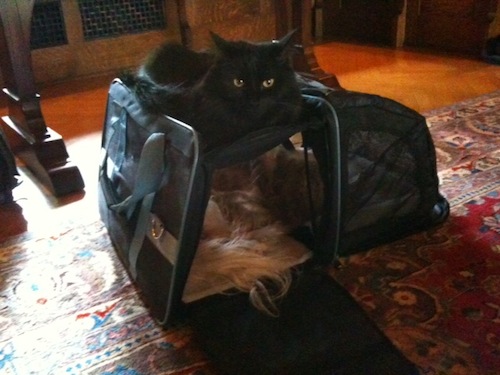 The Smart Space carrier, fully extended, with Chloe inside, and Bella on top

I’m getting ahead of myself, but that picture makes me smile. Let’s start with the carrier itself, not yet talking about the double-wide option. As you can see in this picture, it’s about the same size as Chloe’s large SturdiBag: 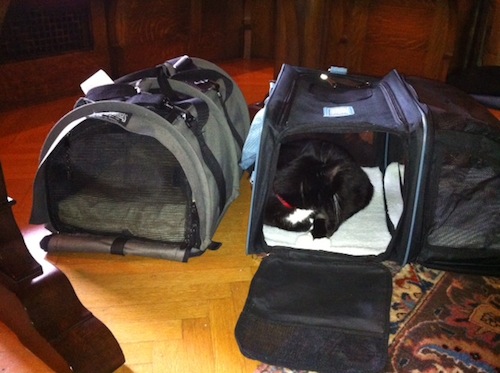 This time, Fran the Cat is inside the Smart Space carrier. As I write this post, our cat Charlie is in residence. It’s been a popular hangout from the moment I set it up.

Fitting under an airplane seat

Unlike the SturdiBag, however, its upper corners are actually corners, and its edges are stiffened, not flexible. Where the SturdiBag’s rounded configuration and flexible ribs allow it to squish into under-seat spaces that are lower than its 12″ height, the Smart Space bag won’t. It’s also a crucial inch longer than the 18″ long SturdiBag.

All is not lost, however. A modification helps: The short ends of the top of the carrier are stiffened by two short rods that live in zipped sleeves. If you unzip the sleeves and remove the rods (don’t lose them, though! There’s no obvious place to store them in the carrier, but keep them safe and at hand), you can coax the carrier into a space that’s much lower than 12″, because the top now tilts. It doesn’t bend, because the support rods in the long sides of the carrier can’t be removed, but the tilting is pretty effective.

Alternatively, you could take advantage of the fact that the carrier is an inch narrower than it is tall, and put it under your seat on its side. You’d likely want to trim an inch or so off the long end of the stiff board that forms the base of the bag, and consider at least unzipping and loosening the short rods I mentioned above, so that the carrier can pancake a little to fit under a seat. I don’t love this approach, because it’s fussy. You can unzip and loosen the rods before you walk down the jetway, that’s no problem, and you’ve trimmed the base board long ago, but you have to tilt the carrier on its side and move the padding onto the new “floor” of the carrier, all while your dog is inside and other people are trying to get into their seats around you. And you have to do it all again once you’re in the air, in reverse, if you want to take advantage of the carrier’s pop-out side.

Using the pop-out side

The only reasonable way to use the pop-out side is if the carrier itself fits under your seat oriented left-to-right. Why not oriented front-to-back? With the pop-out opened, the carrier is a whopping 23″ wide, which would only fit in those few planes that have shared under-seat spaces (and only, in that case, if you’re sitting next to someone with no need for storage space). How about pulling the whole contraption out into your legroom area and then expanding it? It’s too long for that, unfortunately, unless you’re traveling in Business or Economy Class (and even then, you’d have to be sitting next to a friend, since the pop-out will extend into your neighbor’s space).

For most of us, therefore, that means that you can only take advantage of the pop-out in a seat whose under-seat space is a full 19″ wide. As I mentioned, the rods supporting the long sides of the carrier cannot be removed, and they create firm corners at 19″. For the same reason, it wouldn’t do any good to shorten the board that stiffens the bottom of the carrier, since the edge rods will still maintain the carrier’s original length.

If that kind of space is available, the carrier is a traveling pet’s dream. The entire side unzips and folds down, opening a mesh tent that, supported by side braces that flip up, essentially doubles the available space. It’s fiddly to do: You have to unzip one edge of the top of the carrier, reach in past your dog and raise the two braces. (There’s a tiny Velcro loop on each side that’s meant to secure them in place, but that’s just way too fiddly to do in the position you’ll be in. Happily, friction’s good enough.) Then you’ll have to move one of the two stacked padded bases over into the new space, so your dog has something soft-ish to lie on.

I say “soft-ish,” because the pads are really just thin, stiff boards with the thinnest of faux sheepskin around them. My best solution for adding padding to the expanded space (or even the original space)? I bought a small sheepskin at IKEA (it’s called RENS, and it costs $29.99). It’s smaller than their normal sheepskin rugs, and it’s as flexible as cloth — so you can fold it up and carry it in your small personal item (since your dog takes the place of your carry-on), or in a large vest pocket.

Costs were clearly cut on the padding, and the shoulder strap, too, is a little cheesy, but given the great price of this carrier ($33.99 from Costco, $55.95 from Amazon), its quality is impressive. The zippers and mesh are solid, and a couple of sewn-on carabiners are provided if you want to secure the zipper ends. There is a mesh panel in the top of the carrier, so you can at least see your dog from above. There’s a built-in tether, and there’s a substantial pocket on one end and another small pocket on one side.

You may recall that I’ve suggested traveling with a Pet Dome, so that you can move your dog into a large lounge during really long flights. A couple of readers have done that, most recently Kristina, traveling to Paris with Kara, her Chinese Crested. This carrier would save you from having to carry the PetDome with you — but keep in mind that it will only work if your under-seat space is 19″ wide. Otherwise, you’ll be better off boarding the plane with your dog in a shorter carrier, and then transferring her to the Pet Dome.

[1/31/12 I just found in my in-box a message from reader Marianne, who traveled last year with Finnbarre, her Miniature Poodle, in a Smart Space carrier. Here’s what she had to say about it: “On a trip to the US last month, I purchased a ‘Smart Space Pet Carrier with Flex Room.’ It measures 19 x 12 x 11 and was about $55. I carried it home on the plane to see if it would fit under the seats. It fit under the seat on an American Airlines 767-300 (with a little flexing) and it fit on a Delta 757-200, again with a little flexing.  This carrier opens up with a side zipper to almost double the space, and although it really couldn’t be doubled on the plane, it works great in the house and on the backseat of the car.”]