The last piece of the report Jen and Troy sent from their trip to California’s Shenandoah Valley wine country focused on their plane flights from Belllingham to Seattle on a Bombardier Q400 (Alaska Airlines/Horizon Air/Hawaiian Airlines), and from Seattle to Sacramento on a 737 (-800 series).

“From Bellingham we boarded a Bombardier Q400 turboprop plane with Sophie in her large SturdiBag. The small seats are four across, in two pairs, and there are about 20 rows to accommodate about 80 passengers. The airplane is very fast, smooth, and quiet, as opposed to many other turboprop planes. The actual airtime between Bellingham and Seattle was 20 minutes, although with boarding taxiing, etc. it took about an hour to get from airport to airport. Fortunately, the under-seat space is completely undivided, so Sophie’s carrier fit sideways with ample room to accommodate our large carry-on backpack, too. I don’t think that the SturdiBag would fit as well lengthwise under the seat even though we took [Dog Jaunt’s] advice and cut off the inch of the board underneath.”

“We took the optional upgrade option on this second flight from Seattle to Sacramento because it’s more comfortable for us, and because another reader had noted in a post that there was space between the seats in first-class to accommodate the carrier. There was A LOT of room, as you can see in the picture I included. Her carrier fit lengthwise completely under the seat. 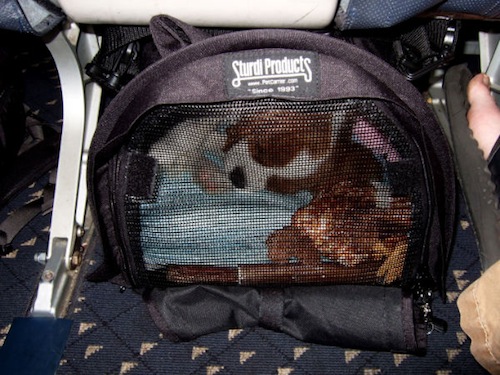 Sophie (along with a new plush squeaky toy and two bully sticks) in her large SturdiBag, oriented front-to-back under a First Class seat on an Alaska Airlines 737-800

Again, our little Sophie slept like a proverbial angel throughout the flight. We flew coach for the return flight and her carrier fit just fine beneath the middle seat.”

All of this is good news, especially the part where Sophie snoozed through her flights. Jen and Troy were completely unhappy, however, with what they saw of Alaska Airlines’ cargo service:

“We checked Sophie’s hard-sided small Grreat Choice Pet Carrier filled with her non-essential gear at Bellingham International Airport. We made that choice because it’s what Sophie is used to and we wanted to be able to leave her contained for a few hours from time to time and not worry about her trying to escape her SturdiBag. We noticed a woman checking her German Shepherd in an extra-large hard-sided carrier at the same time. Upon arrival in Sacramento, Alaska had lost both our carrier and the woman’s German Shepherd. It was a long and stressful hour for us and the other passenger before they finally found her dog and our dog carrier.

Sophie’s Grreat Choice Carrier was in perfect condition when we checked it in Bellingham, and it was dramatically broken when they returned it to us in Sacramento. 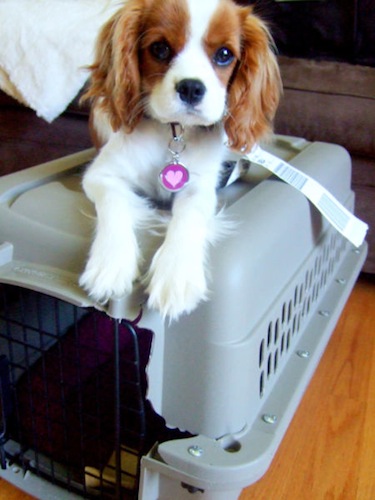 Sophie is not at all pleased about her broken crate

Since it was still semi-useable and we were in a hurry, we didn’t raise the issue with Alaska, but being so careless as to ruin her carrier was a large mark against them in our book.”

Thank you again, Jen — this time for the under-seat information and for the heads-up about Alaska Airlines’ handling of your luggage and another traveler’s dog. I’ve added this post to Dog Jaunt’s ongoing series recording under-seat plane measurements.