Tri-Rail is a 71-mile commuter railway on the east side of Florida, connecting West Palm Beach and Miami by way of Boca Raton, Pompano Beach, Fort Lauderdale and other communities (now operated by the South Florida Regional Transportation Authority, the Tri-Rail trains run on tracks once owned and operated by CSX — the line was formerly CSX’s Miami Subdivision). A convenience for residents, Tri-Rail is also a useful option for visitors with small pets, particularly since it links up with Metrorail and Amtrak. 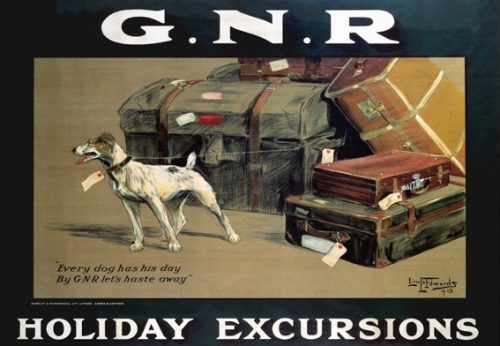 All wrong, of course, because the ad is for the Great Northern Railway (dissolved in 1923), and that pup is not in a carrier, but still! Train travel with small pet dogs!

Similarly, it’s useful to know that Tri-Rail also connects with Metrorail (or “Metro”), the rapid transit system for Miami and Miami-Dade County. The two shared stations are Miami International Airport and, one stop to the north, Tri-Rail/Metrorail Transfer Station. The Metro also allows small pets in carriers onboard its trains and buses (be sure that your pet’s carrier doesn’t inconvenience other passengers, is the gist of the pet policy). That means that someone arriving with a small pet at MIA can readily take the Metro into downtown Miami, for example, or head north to Fort Lauderdale on Tri-Rail.