Put briefly, your pet dog need only be leashed and muzzled to travel on Rome’s public transit, but there is a fee. Broadening the focus beyond Rome, small pets in carriers travel for free on Trenitalia regional and long-distance trains, while there is a fee for larger dogs. We haven’t been back to Rome since Chloe walked (or, rather, wiggled — she was very small) into our lives. I suspect that, as in Paris, the rules provide a general framework for pets on public transport, but that actual practice looks a little different — I’d love to hear in the comments from folks who routinely travel with their pets in Rome! 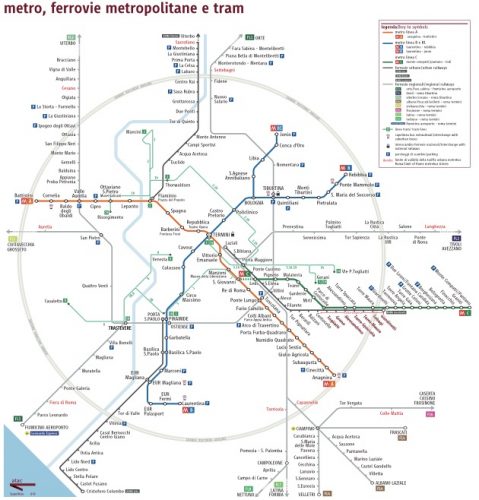 Buses, metro, and tram within Rome

The web of responsibility for public transit in Rome is complicated, but the main website to consult for information about the city’s buses, metro, tram, and commuter rail is ATAC (short for something like “Agenzia del Trasporto Autoferrotranviario del Comune di Roma”).

The ATAC website directly addresses pets on buses and metro trains, saying that small and mid-sized dogs are allowed onboard if they are leashed and muzzled (cats and birds may also travel by bus and metro, but they must be in carriers). There must be no more than two pet dogs per bus; on the metro, pet dogs are allowed in only the first and last cars. There is a fee for pet dogs (service dogs travel for free).

This does not address pets on trams or commuter lines, which are also operated by ATAC. I assume that leashed and muzzled dogs are also allowed onboard, but haven’t been able to find supporting language.

Trenitalia operates both regional train lines (useful for commuters but also for visitors trying to get to the Fiumicino airport, to Civitavecchia, or Ostia Antica) and long distance trains. Pet dogs are allowed on all Trenitalia trains (including, I can’t help noting, sleeper cars — for a fee, of course, and in some instances you’ll be required to reserve the entire cabin). You’ll want to read the details carefully, but, broadly speaking, small pets in carriers (maximum size 70x30x50 cm) travel for free, while larger pet dogs must be leashed and muzzled and paid for.

One way to get to the Fiumicino airport is to take the regional FL-1 train. At €8.00, it’s cheaper (by 6 euros) than the direct Leonardo Express train, also run by Trenitalia, but it makes many more stops. Here too, small pets in carriers travel for free. It appears that larger pets (leashed and muzzled) also travel for free on the FL-1 trains, but please note that they are restricted to the first car.

A third way to get to Fiumicino is to take a Terravision bus, but the company’s Conditions of Carriage cagily avoid a definitive pet policy: “Terravision is not required to carry animals on its vehicles except for guide dogs for blind or deaf passengers.”

Speaking of alternatives, Megabus has a countrywide network of bus routes that competes to some extent with Trenitalia trains. For pet owners, however, the choice is easy: Megabus does not allow pet dogs on board. “Sui servizi megabus.com non sono ammessi cani o altri animali fatta eccezione per i cani addestrati che assistono i clienti disabili nello svolgimento delle attività basilari.”