This post was triggered by an article I ran across applauding the Madrid subway system’s recent decision to eliminate fees for pets. (Buen trabajo, Madrid!) I’ve since learned that Madrid’s public transit system, including metro trains, buses, and cercanías local rail, is vast. High time, therefore, to include it in Dog Jaunt’s list of public transit pet policies. Here’s what I’ve found:

Madrid’s metro system (as always, I give you the general link first, and then follow up with the pet policy — which gets its own link, so you can access it rapidly if you need to show it to another passenger or to an official) allows small pets in carriers onboard if they are not obnoxious in some way to other passengers: “Acceso con pequeños animales domésticos en receptáculos se permitirá el acceso con pequeños animales domésticos, siempre que vayan transportados en receptáculos idóneos y no resulten peligrosos ni molestos por su forma, volumen, ruido y olor para el resto de viajeros.” No details are provided about carrier size or type of pet. 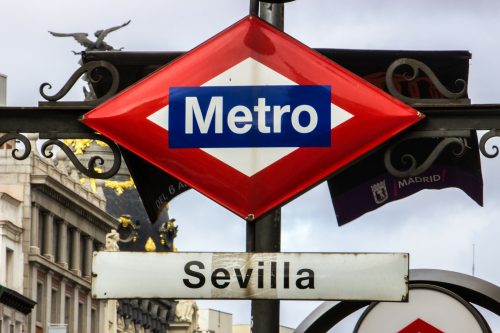 It says something that the images resulting from a search for “dog,” “Madrid,” and “metro” don’t include carriers. Perhaps dogs in carriers don’t photograph well; perhaps no one obeys the carrier part of the rules. While I wait for someone to report, I’ll play it safe and stick with this neutral photo….

The bus system, operated by Empresa Municipal de Transportes de Madrid (“EMT”), also allows small pets in carriers onboard [PDF] if they’re not obnoxious to other passengers (scroll down to Artículo 11).

The cercanías local rail system, operated by RENFE, also allows pets onboard, and by “pets” they mean dogs, cats, and birds. Dogs must be leashed and muzzled (other pets need only be leashed). There is no pet fee. However, there are some limitations on when pets may  travel: On weekdays, rush hours (6:00 to 9:00, then 13:30 to 16:30, and then 18:00 to 21:00) are pet-free. Weekends and holidays have no limitations.

Please note that RENFE operates trains throughout Spain, including Spain’s high-speed AVE trains. RENFE’s overall pet policy repeats the rules I’ve just summarized for traveling en cercanías with a pet, but it also provides the rules for mid-distance and long-distance trains. On mid-distance and Avant trains, pets (including dogs, cats, ferrets, birds) weighing no more than 10 kg may travel in a carrier (maximum size 35x 60x 35 cm) for a fee (“25% del billete a Tarifa General del tren correspondiente en el que se efectúe el viaje”). On long-distance and AVE trains, the rules are the same, with some additional provisos: You’ll need to engage the entire compartment if you want to travel in a sleeper car; and there’s no extra fee if you’re traveling with a ticket for “Preferente sentada, Club, cama Preferente, cama Gran Clase y Butaca Gran Confort.” Please note, however, that there’s some possibility that your pet may not be allowed on a long-distance or AVE train if another passenger objects (a phrase I didn’t see in the other transit systems’ pet policies): “Se permite su transporte siempre que no se opongan el resto de los clientes.”

As I mentioned above, I’m adding this post to Dog Jaunt’s handy collection of blog posts about pet friendly public transit!