This is a quick post courtesy of reader Danielle, who sent a report via Dog Jaunt’s Facebook page about her recent trip with new pup Addison on a Delta A-319. She kindly agreed that I could repost the info and her picture here, so it wouldn’t scroll away into the Facebook ether.

I have traveled with Chloe on a Delta A-319 in the past, and reported about the under-seat spaces I encountered, but I was in the Coach section — and it looks like Delta has changed its A-319 configuration a bit since I wrote that post (nowadays there’s also an Economy Comfort section, and the bulkhead is in front of Row 4, not Row 5). Here’s the current seat map for Delta’s A-319s, courtesy of SeatGuru. Please note that Danielle and Addison were in Row 2 on both flights, first on the port window (2A) and then on the starboard window (2D):

“I recently adopted a mini schnauzer, and wanted to take her home for the holidays with me to meet her loving family, including a fellow mini schnauzer (just a quick flight from ATL to New Hampshire). It was with your blog that I was able to choose the right carrier (Large SturdiBag), picked up tips to make her comfortable when in it, and educate myself on what to expect while both in the airport and on the plane. Addison was an incredible traveller — breezed through security and silently snoozed in her carrier the whole time. We were lucky and upgraded to first class both flights — window seats 2A and 2D on Delta’s A319. I was a bit nervous when reading that first class can be hit or miss, but it was definitely a hit on this plane. Plenty of space for Addi, and plenty of space (and free wine 🙂 ) for Mom. To add to your collection of carrier photos, I took one of Addi snug under the seat.”

Here’s that picture of Addison, peeping out through the SturdiBag’s top hatch: 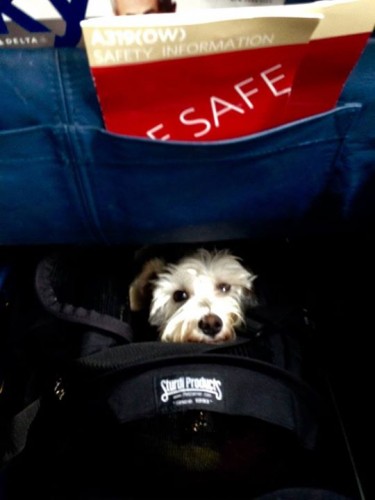 I believe this picture is from the starboard side of the plane, since it looks like the seat pocket ends at the right, and there’s a hint of a right wall at the bottom. This, therefore, is a large SturdiBag (and adorable pup) in the under-seat space for window seat 2D on a Delta A-319.

Thank you so much, Danielle, for sending word back to Dog Jaunt Nation about your trip, and congratulations to you and Addi! I trust it’s just the first trip of many you’ll take together. I’m adding this post to Dog Jaunt’s ongoing series recording under-seat measurements of the various planes we fly on, and I’m tagging it to join the blog’s collection of pictures of carriers in action under airplane seats — to inspire other travelers, and to serve as a resource in case they need to convince an airline rep that there’s room on a particular kind of plane for their pet’s carrier.