Reader Ahmé kindly sent me a report about her trip from Grand Rapids, MI to Naples, FL, via Atlanta. She and Thomas, her 17 lb. Miniature Schnauzer, took two flights on Delta, and sat in an aisle seat on both. 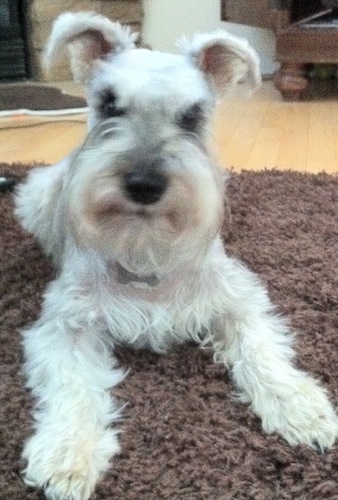 Thomas the Miniature Schnauzer, not yet in traveling mode

Thomas “has excellent manners and is quiet and easy going. He shakes a little when we are getting on the plane but settles down once we get situated. The first few flights he would scratch and turn when there was a lot of noise (take off & landing) but now after doing it a few times he is pretty settled.”

Ahmé bought a large SturdiBag for Thomas, and likes how it works for him. She “trained him to go in, turn around, and sit down on command. The ‘squishiness’ of this carrier is good for him because it gets him more space and he pushes it out a bit when he turns around. It is also good for the planes because it can squish down as needed and around obstacles under the seats etc. I also like that the carrier itself is fairly light (I can’t spare any more weight with the weight of my dog) and yet sturdy and strong.” 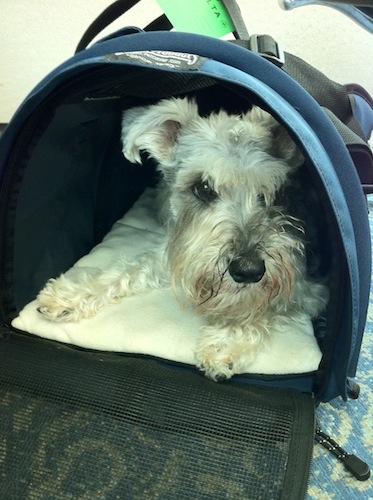 And now inside his large SturdiBag

Their first plane was a Delta A320 (SR), and they were in an aisle seat on the right side of the plane. “He fit well under the seat, put in front to back with an extra 1-2 inches of width available. Middle seat would have also worked.”

Ahmé sent a couple of pictures of Thomas’s carrier in place under the aisle seat — one view from the aisle, and one from above, past her knees. While the carrier looks a little long in the first shot, you can see in the second that it really doesn’t extend more than an inch or so past the plane of the magazine holder on the back of the seat, so it works. 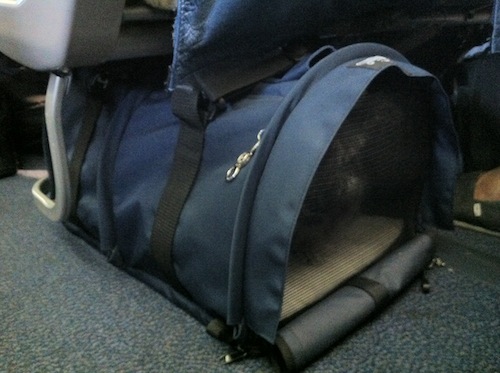 Remember to disregard the “awning” over the entrance of the SturdiBag when you’re looking at its length — it’s just a flexible piece of fabric. 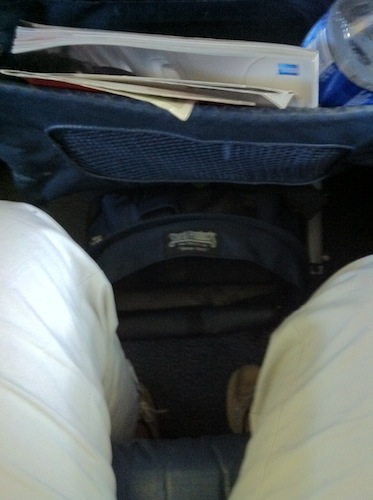 “Looking down, those are my momma’s knees”

Here again, Ahmé sent a couple of pictures of Thomas’s large SturdiBag in place under their MD-88 seat: 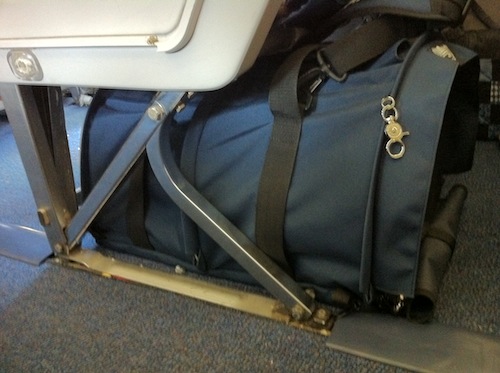 A side view, from the aisle 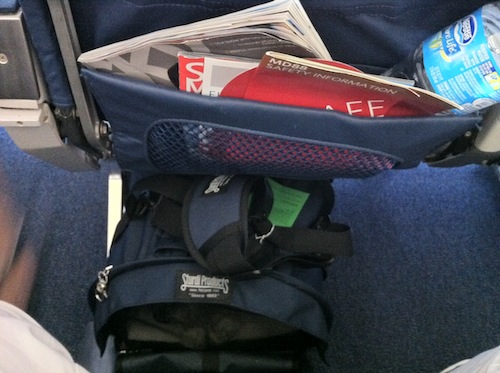 And the view from above — I might have chosen to orient the bag left to right if this much of it was showing, but it clearly didn’t perturb Ahmé’s flight crew

Thank you so much, Ahmé, for the wonderful photos and the report about your trip! I’m adding your info and pictures to Dog Jaunt’s ongoing series of posts recording airplane under-seat measurements, and to Dog Jaunt’s ever-growing collection of pictures of carriers deployed under plane seats.