Just over a year ago, reader Marci sent me pictures of her outing on the Calusa Queen (in Punta Gordo, FL) with Layla, her Yorkshire Terrier. She was also getting ready for her first flight with Layla, and ended up buying a small SturdiBag for her. Here’s what she had to say about that flight, on a Delta 757:

“Well, First Class is not the way to go. I flew on a Delta 757 in First Class with a small Sturdi Bag and it was very hard to get her under the seat. The life jackets are on a sort of shelf that is dropped down from the bottom of the seats. I was worried that I would be told to push her back in more but I would not have been able to, even when squishing the bag down. However, I think because it was First Class that they didn’t say anything. Also, the stewardess saw Layla in her bag as we came in and we talked about her dog, so that might have helped as well. First Class is great, and do-able with a small bag but there is no way you would be able to do it with a large.”

Marci wasn’t able to take measurements, but you know what size a small SturdiBag is (18″ L x 10″ H x 10″ W), and here is Marci’s picture of it in place under her seat: 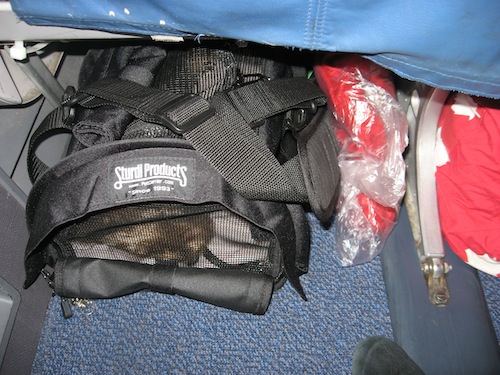 It’s not ideal, true, but it’s really not too bad — the front of the bag is even with the leg brackets of the seat, and that’s about where Chloe’s carrier ends up on our flights together. (Recall that Chloe has a large SturdiBag — two inches taller and broader than Layla’s carrier — and having heard Marci’s report, I would not attempt to fit it under a Delta 757 First Class seat.)

Marci also sent a close-up of Layla inside — through the mesh, you can see her face and her Pebbles-style top of the head ponytail: 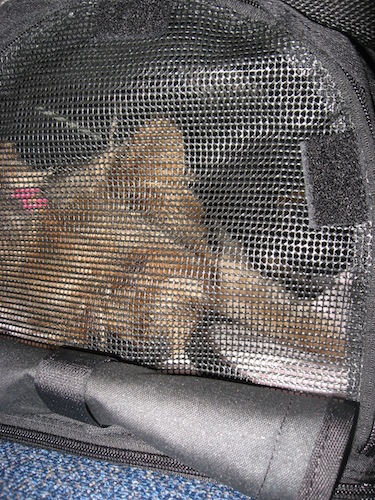 Layla snoozing in her carrier

Thank you so much, Marci! I’m adding your info and pictures to Dog Jaunt’s ongoing series of posts recording airplane under-seat measurements, and to Dog Jaunt’s ever-growing collection of pictures of carriers deployed under plane seats. [5/30/13 please see the comments for another picture of a different carrier under a First Class seat on a Delta 757.]