I can’t remember the last time I traveled First Class. Could it have been 30 years ago? Could it have been never? I chose to make First Class reservations on our Delta flight from New York to Tampa because I had the right number of miles, and because Delta’s Economy seat pitch is so evil that after our last flight my husband and I vowed never to fly on the dratted airline again. Why not blow all of our remaining miles on one Delta flight that would allow my 6’4″ husband to put his knees directly in front of him?

So once again I crawled around with my measuring tape, and here’s what I learned. On a Delta MD-88, the First Class cabin has two seats on each side of the aisle. Under each pair of seats, there are three spaces — a vast shared space, and two separate, tiny spaces on either side. The shared space is 31.5″ wide and 19″ deep (measured from the rail behind the heels of the person in front of you to the imaginary line extending down from your own seat-back pocket). The lowest height of the under-seat space — a thick bar running from left to right — varied from 8.25″ to 9″ tall. That bar is positioned about 9″ in from the front (closest to you) of the under-seat space. One exception: The 6 inches of the shared space closest to the aisle do not have the bar, and were easily 11″ tall. The entire under-seat space, in fact, is easily 11″ tall, except that that bar runs across it.

The narrow space closest to the aisle is 9.75″ wide, and, again, 19″ deep. About 9″ into the under-seat space, it’s 10″ tall, but behind that (deeper under the seat), the space is easily 12″ tall. The space closest to the window is so narrow that I didn’t even notice it until I looked at the picture I took — it’s wide enough to stick one leg into, or a small purse, but that’s it.

Our best choice was to put Chloe’s carrier left-to-right in the large shared space, and here’s a picture: 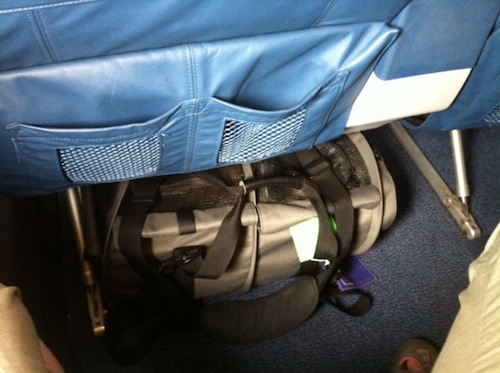 Chloe’s large SturdiBag, oriented left-to-right — and I was very glad indeed that it had not only a flexible top but also sloped “shoulders”

Be cautious with First Class seats, Team Dog Jaunt! On many planes, the under-seat spaces in First Class are nearly solid with electronics boxes, and there isn’t enough room left over for a Teacup Pomeranian, much less a pet Chloe’s size. Presumably, a ticketing agent who knows you’re traveling with an in-cabin pet wouldn’t give you a First Class seat in those circumstances, but it’s worth confirming, and then re-confirming, that your seat has open space underneath it.