Reader Lena sent me a message reporting on the under-seat space she and Penny, her Cava-Poo-Chon, encountered on their recent flight on a Delta MD-90. They traveled in First Class — always a potential risk, but it worked well for them. Please note that Penny was in the Sherpa Delta Deluxe carrier (the same one we used to bring our cat Cora home from Ohio). Recall that it measures 18″ long, 11″ wide, and 10.5″ tall.

Here’s Penny, currently almost 8 months old and weighing 10 lbs.  “She’s supposed to be somewhere between 8-10 lbs, but I think she’ll be more like 12 lbs,” says Lena. 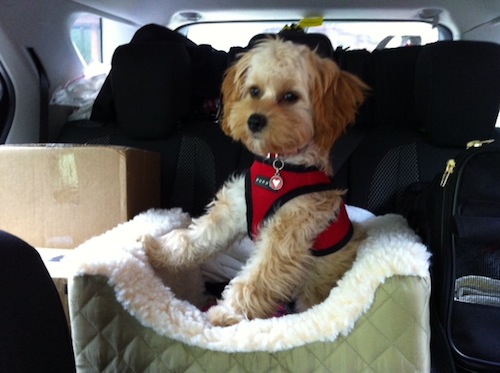 Queen of all she surveys from her booster seat.

Here’s what Lena told me (and here’s a floor plan of a Delta MD-90, so you can follow along — Lena and her husband were sitting on the right side of the plane):

“The carrier fits under the seat with some squishing from the top. The life vest container is under the seat taking away some height space. Also, as you can see from one picture, the carrier spills over to my seatmate’s area (aisle seat). Luckily, it’s my husband’s seat. 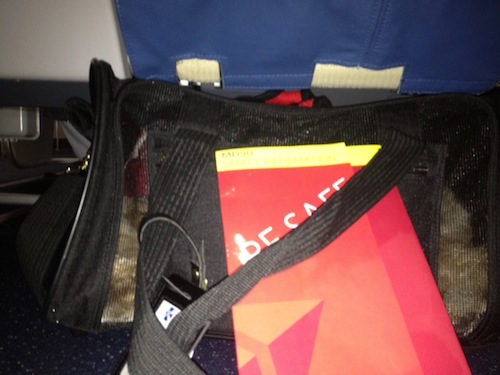 This view is towards the left (aisle) side of the shared under-seat space — as you’ll see in the next shot, Lena has pushed the carrier as far as it will go to the right, but it still projects into her neighbor’s space.

The second picture shows a silver bar on the right side preventing the carrier from butting against the airplane wall. That silver bar took away at least 3 inches of space. 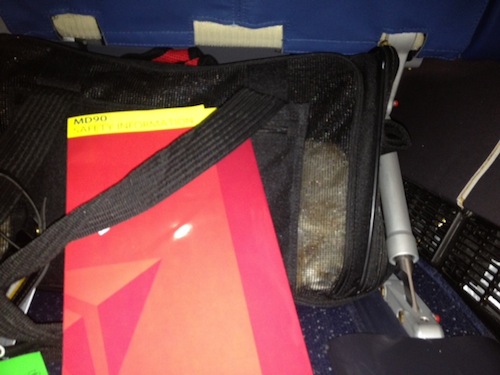 A similar bar is installed right smack in the middle of the aisle seat’s under seat area. There is no way a carrier will fit under there.

Despite needing to squish the top of the carrier, in First Class, the window seat is the better seat for the carrier.”

Thank you so much for the report, Lena! Like I say, First Class is tricky, because so often the electronics they’ve packed under the seats leave no room at all for a carrier. It’s very helpful to see that a substantial carrier like the Delta Deluxe Sherpa works (well, mostly) on a Delta MD-90. I’m tagging this post to add it to Dog Jaunt’s growing collection of pictures of carriers under plane seats, which will help people prepare for travel — and address gate- or ticketing agents’ concerns about the workability of a carrier. I’m also adding it to Dog Jaunt’s ongoing series recording under-seat plane measurements.