Another Dog Jaunt reader sent in a report, almost a year ago now, about the under-seat space she encountered on an American MD-80, but she was traveling in an Economy seat. There’s a world of difference between Economy and First Class seating — and indeed, often you can’t fit a pet carrier under a First Class seat at all — so I was grateful to hear from reader Kelly, who traveled with her husband and their two dogs (a 17 lb. Lhasa Apso and a 12 lb. Poodle mix) from Portland to Dallas and back again over the holidays, on American MD-80s, in First Class seats.

Both of their pups fit in large SturdiBags, and since there were two people traveling with two dogs, they could take advantage of their combined under-seat space. It is my belief, based on the light flare and Kelly’s description, that Kelly and her husband were in seats A&B (row 4, 5 or 6, but not 3, which has a bulkhead) in this picture (here’s SeatGuru’s floor map of an American MD-80): 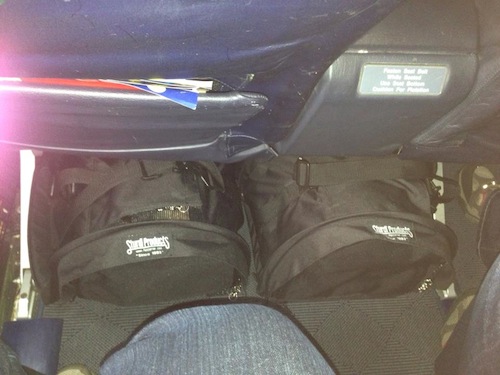 Kelly’s husband is seated on the right (aisle) side of the photo, and Kelly notes that “his space under the seat in front of him was divided by a bar,” which you can see by his left shoe. If you’re traveling by yourself, she recommends that you get a window seat in First Class, since it “has no bar dividing the area.” As you can see, both carriers fit beautifully in that shared space (as Kelly points out, the two dogs “are taking up about a seat and a half worth of room”). Kelly reports that the dogs “fit perfectly under the seats in first class. No issues with either flight, we did have to have our hands swiped at both PDX and DFW when we went through security.”

For completeness’ sake, Kelly sent another picture from their return flight: 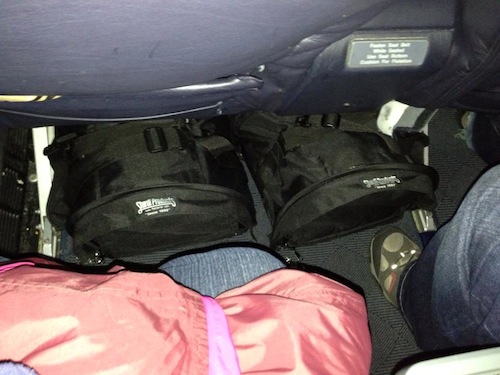 Different flight, but pretty much the identical set-up: Two large SturdiBags in the shared space under A&B seats on an American MD-80

There’s no light flare this time, but that floor vent down to the left convinces me they were again on the left side of the plane. Thank you so much, Kelly, for sharing these photos! I’m adding them to Dog Jaunt’s ongoing series of posts recording airplane under-seat measurements, and to Dog Jaunt’s ever-growing collection of pictures of carriers deployed under plane seats.