Reader Kristina (who recommended the Found My Animal leash I wrote a blog post about a short while ago) recently returned from a trip to Paris with Kara, her Chinese Crested, and bubbled with joy: “WOW! Paris was so awesome with dogs! They allowed dogs inside the restaurant, and in this particular one Kara was actually up on the couch-seat with us. It was great, she is a quiet girl so she just laid there while we ate and had a glass of wine.” 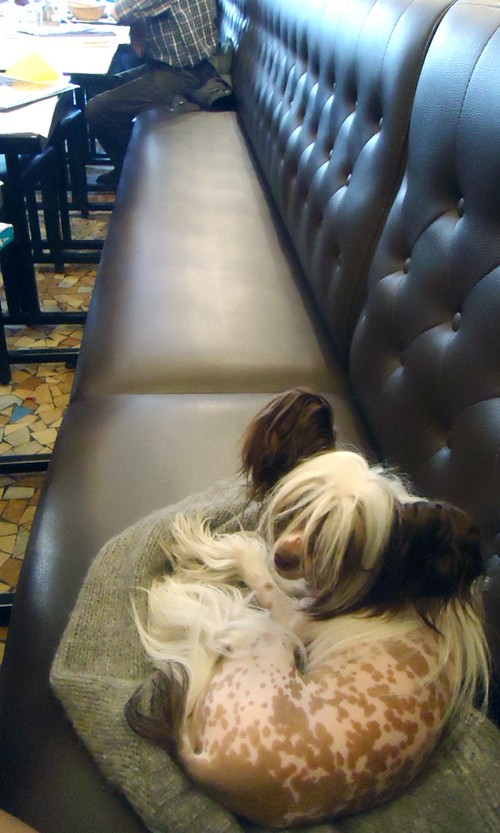 And Kristina kindly sent, too, this wonderful picture of Kara outside the Louvre, ears flying: 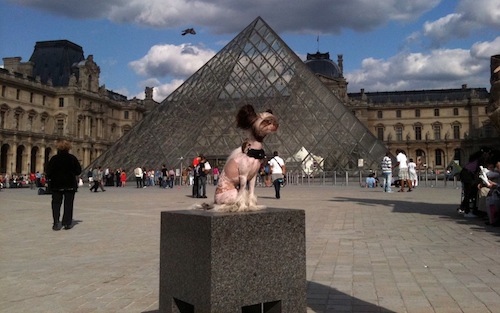 Doesn’t she look like the Winged Victory of Samothrace, one of the greatest of the Louvre’s treasures? 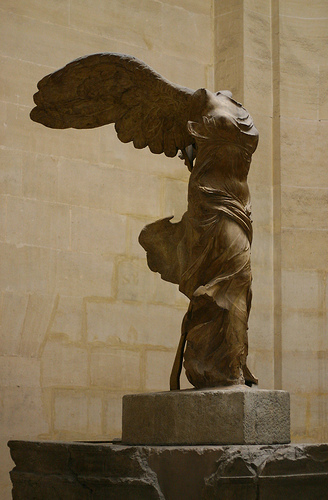 Kristina had considered using a large SturdiBag on their Air France flights, but at the last minute, she changed plans. She opted to board with Kara in her small PetEgo messenger bag (Kara’s smaller than Chloe, so she fits in the small size), and then, once they’d taken off, they transferred Kara into a Pet Dome (for a picture of Kara in her Pet Dome, scroll back through Dog Jaunt’s Facebook page posts to August 10, 2011):

Once we got into the air, about 35 minutes in, I opened the Pet Dome and asked Kara to go in — she did and she fell asleep for the whole flight. We placed the dome under our legs and had a good amount of foot space however we were on two very old Air France planes that were so old they even had the cigarette thing in the seat arms! It was fairly dirty and the room for legs was non-existent even without a dog or dome, but we made it work.

I’m so impressed by Kristina’s care of her dog. No leg room is no joke on an international flight, but by making it work she and her companion gave their dog the best possible travel experience. And by boarding with Kara in her messenger bag, they eliminated their need for a separate travel carrier, trimming their luggage burden. (Keep in mind that this only worked because they had the Pet Dome for Kara to stretch out in during the flight — the PetEgo messenger bag is a marvelous stealth bag, but it doesn’t give your dog the space she needs on a long flight.)

One last bit of information from Kristina about her Air France experience (please note that she was on direct flights between NYC and Paris):

Air France wouldn’t allow us to book our seats until we arrived at the airport on the day OF the flight! It was insane and very stressful because we may not have been seated together and the dome wouldn’t have worked.  We had to wait in line for 1.4 hours because Air France has yet to allow you to check in [on-line or over the phone] with your pup. I wish this would change!

Thanks so much to Kristina for sharing her pictures and information about her experiences. If you have pictures of how you and your pup spent time together this week, please post them on Dog Jaunt’s Facebook page, so we can all enjoy them!