In September 2009, I wrote a quick post about a PetEgo carrier that I yearned for but didn’t actually need: the Pet at Work Travel System, a backpack that holds a laptop and a small dog and a collapsible crate. And there it might have ended, but for reader Christie, who wrote to me and asked whether I thought it might work as an in-cabin carrier for their dog, traveling with them to Paris. As you’ll see in the comments, I said yes, if their dog is tiny (next thing I knew, Christie reported from Paris that the bag had worked beautifully for their 15 lb. dog — not a tiny dog at all!). 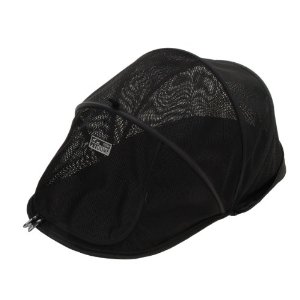 The point of this post, though, is not to highlight my mistakes, but rather to bring the Pet Dome to your attention. The Pet Dome is the collapsible crate that’s included in the Pet at Work Travel System. You can, however, buy it separately, and I did, because I wanted to think about using it as a carry-on lounge for Chloe on future long flights.

I like the carrier we use for her (the large SturdiBag I mention so often), but the Pet Dome provides even more space — unfolded, it’s about 32″ long, 14.5″ wide (at its widest), and 14″ tall (at its tallest). As you can see from the picture, it’s a domed oval, but it stays pretty spacious until just at its ends. I cannot get a good picture of Chloe in it to save my life, so you’ll just have to take my word for it that she fits with plenty of room, and seems perfectly content to snooze in there for hours. Our cats like it too.

Folded up, the Pet Dome becomes a U-shaped object 14.5″ wide across the top of the U, 14.5″ tall from the top of the U to the curved bottom, and 2″ thick. Why not pack the Pet Dome in your carry-on luggage, and then once you’re underway transfer your dog from her carrier to the Pet Dome for the bulk of the journey? The Pet Dome has a padded and moisture-proof bottom, heaps of ventilation, and it zips closed, so it meets all the requirements of an in-cabin carrier. It doesn’t fit under the seat, but during flight you can pull your dog’s carrier out from under your seat and into your leg room anyway (on most, though not all, airlines).

As you’ll have seen from Christie’s comments, that’s just what she and her husband did on their flight to Paris, and it worked well for them. She did mention “United’s cramped leg room,” and I have to hope that they were at least traveling in Economy Plus. I can’t imagine fitting my legs and the Pet Dome in the leg room you’re given in Economy. You’d also need to be traveling with a companion, as Christie was, because the Pet Dome is so long that it takes up the leg room of two seats. If you find yourself making plans for a flight with leg room and a companion, however, give the Pet Dome a thought — on a very long trip, it’ll make a huge difference in your dog’s comfort.

The Pet Dome itself is, like all of PetEgo’s products, well-designed and -constructed. The entrance flap can be rolled up and secured with Velcro. The three support ribs are sturdy. The zippers are of good quality. The mesh is not meant to contain a dog that really wants to be elsewhere — it’s not chintzy, but a motivated dog could be through it in short order. A pad is included, and it’s thin but adequate. My only gripe with the Pet Dome is that the pad tends to shift around too much. I may well sew some Velcro tabs along the bottom edges of the pad, and glue their mates to the floor of the Pet Dome, to solve that problem.

[6/16/14 In the years since I wrote this post, I added more Pet Domes to our collection (we now own six of them), and the large size that I review here became unavailable for a while — perhaps because, as we learned, the flexible rods that support its top became brittle and broke. We replaced them, first with similar carbon fiber rods from a hobby store, and then, more successfully, with thin, flat lengths of brass. Unfortunately, because the manufacturer hadn’t anticipated a need for the ribs to be replaced, the replacements tend to slip out of their sleeves. Happily, PetEgo recently began offering the large Pet Dome again; I’ve bought one from the new batch, and I’ll let you know if the ribs are sturdier now.]