I’ve said plenty of rude things about Sherpa carriers over the years, but I’ve only briefly owned two (the large- and medium-sized wheeled bags). That all changed at the end of December, when my husband and I decided to bring home a cat my parents had rescued but couldn’t, realistically speaking, keep. We had no idea how well Cora would handle the stress of travel, so I decided to buy a good quality carrier, and the best one I could find in central Ohio was a Sherpa.

And indeed they are sturdily-made carriers. My objections, over the years, have instead been to their size (the Medium too small for larger small dogs like Chloe, the Large too huge for in-cabin use) and their design. Since I began writing this blog, Sherpa has added new carriers to its line-up, and has fiddled with the measurements of its existing carriers. I’m happy to report that it is now easy to find a reasonably-sized Sherpa carrier. We bought the Sherpa Delta Deluxe Pet Carrier at a Petco store. There’s some on-line confusion about the carrier’s measurements (Sherpa’s measurements are wrong, oddly enough, but Petco’s are right: 18″ long, 11″ wide, and 10.5″ tall). Cora, a 9.5 lb. cat, had plenty of room, and the carrier fit in the under-seat spaces of our Southwest 737-700 planes.

Here’s what I liked about the Sherpa carrier: It was readily available in rural America; it’s solidly constructed; there are extensive mesh ventilation panels; the provided faux sheepskin pad is thick and comfortable; there is a capacious zipped pocket on one long side, and a smaller pocket on the other; and (my favorite feature) there is a luggage panel on one of the long sides, to hook over your suitcase handle, and to string a car safety belt through.

Cora did scrape a bit at the Sherpa bag, mostly during car travel to and from the airport, so I was grateful that we’d sprung for a carrier with sturdy mesh. Once she resigned herself to her fate, she curled up comfortably in the carrier, and has gone into it voluntarily since her arrival in Seattle.

Here’s what I don’t like: The top panel of the Sherpa carrier is solid fabric, so you cannot see down into the carrier — and for most of your travel day, your pet will be at your feet. The zippers were stiff and difficult to unzip, making it a question whether I’d get my hand into the carrier before Cora got one or more body parts out. Only one end unzips, so the carrier cannot be collapsed. Both ends are reinforced so they’re solidly square — while the middle part of the bag is less structured, and flexes a bit, the stiff ends make it difficult to maneuver the carrier around under-seat obstructions. The stiffness of the ends, too, made unzipping the one end that opens (to reach in and pet Cora) unworkable — your hand and wrist are pinched and abraded by the time they make their way into the carrier. The privacy panels on the ends are kind of a nice touch, but really, they’re pointless, since one entire long side is mesh — and doesn’t have a privacy panel. There is no pad on the shoulder strap. The handles are long and floppy — which means they can be used to reinforce the luggage strap (see the picture below), but also means that they’re annoying unless they’re Velcroed together. 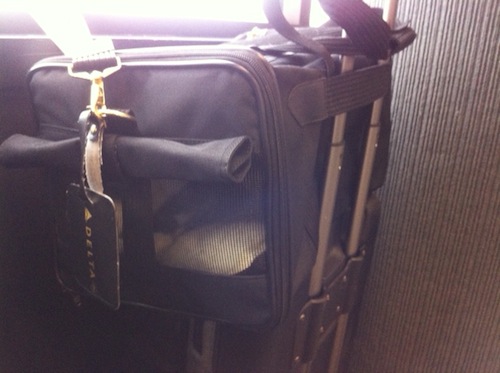 A light-blasted photo of the Sherpa Delta Deluxe carrier on my husband’s carry-on — you can see the carrier’s built-in luggage strap, supplemented by the handles (as well as a hint of black-and-white Cora)

Chloe’s large SturdiBag is not perfect. After all these years, I have come up with three flaws I can’t overlook: There is no protective strip of fabric under the top panel zipper, so I always risk catching Chloe’s head fur in it when I open/close it to reach her (mind you, the Sherpa zipper is exactly the same — but it’s so balky I never open it, so the problem doesn’t arise). If the black plastic ends come off the supporting carbon rod ribs, the rods will poke through their fabric pockets (a very rare problem). And while there is a better seatbelt solution on the SturdiBag (two vertical nylon twill straps force the seatbelt to hold the carrier tightly against the car seat), there is no luggage strap — looping the handles back over your suitcase handle works to a point, but for real security you need extra help.

As you see in this picture, both carriers fit equally well under a Southwest 737-700 seat. 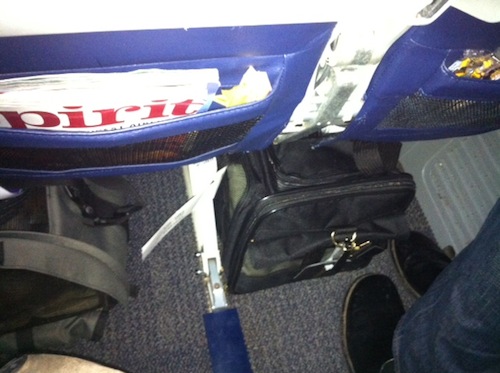 Large SturdiBag on the left, Sherpa Delta Deluxe on the right. The SturdiBag looks longer, but only because it has that 1.5″ fabric awning around the end that zips open. I still have no idea what purpose it serves.

However, Southwest’s under-seat spaces are generously sized, and are relatively easy to maneuver around. In nearly every other airplane I’ve flown on, there’s less space, and the space available is complicated by projecting electronics boxes or life jacket containers. After giving a comparable Sherpa carrier a good workout, I still prefer Chloe’s large SturdiBag.