This post is long overdue, I’ll just say that up front. Reader Melissa was inspired to send it to me by my post comparing Chloe’s large SturdiBag with our new cat Cora’s Delta Deluxe Sherpa bag. She and Josie, her Lhasa Apso, “travel frequently for agility trials, and last December (due to your glowing reviews) for our trip to the AKC Invitational, I upgraded Josie’s travel to the Sturdibag.  We both love it, so in turn I recommended it to a friend.” 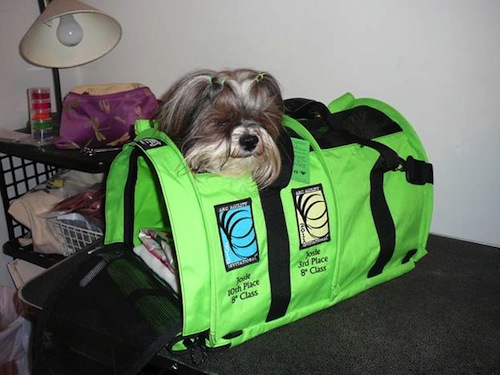 Despite my urging you guys to get the large SturdiBag in discreet black, I must say it’s refreshing to see it in vivid green — and I love the patches! Congratulations, Josie!!

She sent the friend a couple of photos comparing the new bag to Josie’s old medium Sherpa carrier (which is the same size as the Delta Deluxe Sherpa), and she sent them to me, too — kindly refraining from mentioning that it’d have been an obvious and useful thing to include in my post. As she points out, the first photo shows how the top of the Sherpa droops (“you can really see where the Sherpa collapses reducing the height”):

The top of the SturdiBag, supported by a central rib, pokes up significantly higher than the Sherpa carrier, even ignoring the Sherpa droop, but it readily flexes downwards. 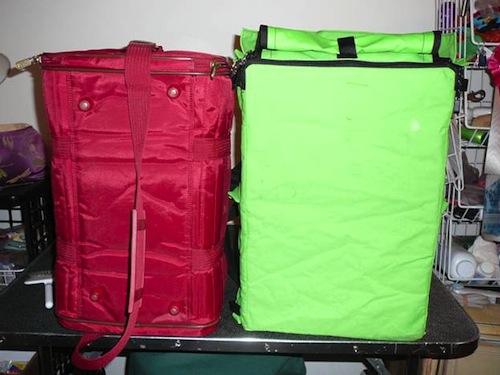 Bottom view, showing how the two carriers have nearly the same footprint (the SturdiBag is the same length but an inch wider).

Like me and Chloe, Melissa and Josie flew on a Delta 757-300 with a large SturdiBag carrier — and also like me, she wasn’t able to take a photo of the carrier in place. However, her verbal snapshot is very helpful, especially as regards the plane’s First Class under-seat spaces.

They flew in Economy seats on their outbound flight, and Melissa reports that “there was ample room…. I was lucky, seats on either side of me were empty and I was able to have Josie’s carrier on the seat next to me for the entire flight, of course I put her back under the seat for landing. ” On their return flight, “we were upgraded to First Class for our return flight, ample room plus for the Sturdibag!”

On my flight, I’d caught a glimpse of the First Class spaces, and thought they might be workable — but it’s very good to hear from someone who actually fit her pup and carrier in one.

Thank you so much, Melissa, and not least for your patience! Seven months is approaching my personal worst in tardiness. Despite appearances, I’m so grateful for your message and photos, and I know other travelers are too. I’m adding this post to Dog Jaunt’s ongoing series recording under-seat plane measurements.