Please note that this post refers to maximum carrier sizes accepted for in-cabin pet travel by the leading U.S. airlines. 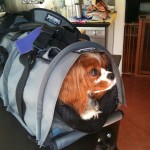 Chloe in her SturdiBag (Large)

We bought SturdiProducts’ large-sized pet carrier in the belief that it was just barely acceptable to most airlines. We now know that it’s too big (12Hx18Lx12W). On the bright side, its support struts are very flexible, so it does, in fact, fit under every seat we’ve encountered (and Chloe’s been fine — the carrier has a lot of headroom). Also on the bright side, it’s a beautifully-made product, with great features like top ventilation panels (with privacy blinds) and a small top hatch that zips open to allow pats. It’s very light (the large size is 2 lbs., 10 oz., and the small size is 3 oz. lighter), which helps with the airlines’ weight limits. It also has built-in loops through which a seat belt can be buckled, making it an excellent car carrier. If you have a dog that fits into the small SturdiProducts carrier (which, at 10Hx18Lx10W, is pretty close to the major airlines’ maximums), I recommend it unhesitatingly.

I will keep on using our large SturdiProducts carrier, because it’s worked on every trip we’ve taken and Chloe’s comfortable in it. If you have a non-compliant carrier, I suggest keeping dog and carrier out of the ticketing agent’s line of sight as you check in for your flight — put your dog and carrier on the ground between your feet and the ticketing desk, not up on the counter. If you’re questioned about the size of a soft-sided carrier, point out and demonstrate its flexibility. An upbeat-but-anxious tone will go a long way towards persuading the ticketing agent to let the flight crew deal with the problem. (None of this will be of any use, ultimately, if your carrier does not actually fit under an airline seat, so don’t try bending the rules with an oversized hard carrier or a soft-sided carrier that really won’t flex sufficiently.)

Sherpa makes a very popular line of carriers. The small size (8.5Hx15Lx10W) will satisfy all the U.S. airlines Dog Jaunt lists; the medium (10.5Hx18Lx11W) is officially too large for all of them except Alaska/Horizon and Midwest. Although Sherpa suggests that their large size is acceptable for some airlines, at 11.5Hx20Lx11.75W it’s even larger than Chloe’s carrier. [2/21/11 Looking at the Sherpa site just now, I notice that the current dimensions for the large Sherpa bag are 11.5Hx19Lx11.75W — if the company has shortened the bag by an inch, that’ll make a difference in its workability. A carrier 18 inches long fits comfortably left-to-right under most airplane seats we’ve encountered; 19 inches is riskier, but possible, especially if you take the stiffener out of the bottom of the bag and trim a half inch off of it.] I’ve bought the medium and large sizes, and returned the large right away (if I’m going to break the rules, I’ll do it with the SturdiProducts carrier, which is better-designed and better-made). I hesitated over the medium, because I’d bought the rolling version and on the trip I used it I loved being able to wheel Chloe behind me. If she were slightly smaller I would have kept it (I gave it to a friend with Papillons). I don’t love the product, though. The only mesh openings are on the sides and end, so you can’t see into the bag when it’s in its usual spot under your feet. The privacy panels roll up, but where they’re secured in the SturdiProducts carrier with velcro straps, the Sherpa panels are secured with fiddly clips. Though the Sherpa and SturdiProducts carriers are in the same price range, the Sherpa bags feel cheesy.

Please note that this is the one time you won’t hear about Chloe’s beloved PetEgo messenger bag, since at 13Hx20L10W it’s substantially over the airlines’ limits and its wedge shape doesn’t make the best use of the space available. We pack it in her suitcase, for use when we arrive at our destination.

For smaller dogs, as always, there are far more choices, and some are very well-designed.

Creature Leisure, the maker of Chloe’s travel crate, sells a very nice carrier called the Carry-Den. The medium size (9Hx17Lx10W) is pretty close to the major airlines’ maximums, and the product is well-thought-out and well-made. The Carry-Den XT converts to a backpack. The same company offers a cleverly-designed rolling carrier called the Pet Pilot XL. In its normal configuration (14Hx19Lx9W), it’s within shouting range of the airlines’ maximum sizes (it lies horizontally under the seat), and it has a gusset that can give your dog several more inches of breathing room. It has useful external pockets, and it rolls. It’s for dogs who can be comfortable in a interior space measuring 12Hx17Lx7.5D (12” deep with gusset expanded).

PetEgo’s Jet Set Carrier, in the small and medium sizes, is worth considering. It can also be bought as part of a JS Travel Kit that includes two small suitcases (one rolling). I can’t get enthused about that option, because the suitcases seem small and fussy to me (and at least one of them would have to be checked), and would provide me with wheels only at the point I no longer really need them (I need them on layovers, to get out to pet relief areas, not at the end of my trip, when I can loop Chloe’s carrier ‘s handles over my own suitcase’s handle). The JetSet Carrier itself is a very nice product, though.

Teafco Argo’s Petascope Airline Approved Pet Carrier (Small) is chic, well-made and, at 9.25Hx16Lx11.5W, credibly close to the airlines’ maximums. I don’t love their regular carrier because it has small ventilation panels, but it’s certainly comparable to a Sherpa bag and is better-made. Here’s the Amazon link, if you want to check it out for yourself: Teafco Argo Aero-Pet Airline Approved Pet Carrier (Small). If you have a truly tiny dog, consider Teafco Argo’s Petaboard Airline Approved Carrier (Extra Small). It’s well-made, has plenty of ventilation, and includes a built-in sleeve/pocket that can be slipped over a suitcase’s handle. Fascinated as always by rolling carriers, I want to love Teafco Argo’s rolling option, the Tally-Ho Wheeled Pet Carrier (Medium), but I can’t, again because the ventilation panels are small.

Also suitable for a tiny dog is the very cool Sleepypod Mini. The base can be used as your dog’s everyday bed; add the mesh dome, and the bed is ready for car travel (pass the seatbelt around the base and through the top handle) and, potentially, air travel. Both sizes of Sleepypod exceed the airlines’ height allowances (the regular is 13.5″ high; the Mini is 11″ high), and I fear that the 17″ diameter of the regular size would allow too much of the carrier into the area that flight attendants yearn to keep clear. The Mini, however, would likely work as an airplane carrier: the mesh dome is flexible, and it’s a more modest 13″ in diameter . Remember to subtract a couple of inches for padding when you eye your dog; she’ll need to fit in an interior space measuring 9″ high, 11″ diameter.

RoccoAndJezebel.com’s Brody Bag is equally cool, but with a different vibe — the Mini (8.5Hx14Lx8W) would satisfy any airline, and the Medium (9.5Hx16Lx10W) is within spitting distance of the airlines’ requirements.

Here are three more rolling carriers for your consideration. FetchDog’s Travel Easy Tote is 10.5Hx16Lx13W, which isn’t too far off the maximums. Since the tote converts to a backpack and includes wheels and handle apparatus, I wish the company provided its interior dimensions. I’d also like to see the product, to determine whether the back (which will be the bottom, once the bag is under the seat) has enough padding over the handle apparatus.

Pet Gear offers a line of I GO2 rolling carriers that convert to backpacks. The Weekender, at 13Wx17Hx10L (I write the measurements that way, because the bag will be on its back under a seat), is pretty close to the airlines’ maximums. I worry, though, about the 13″ height of the bag, since this particular product is made of less flexible material than other Pet Gear carriers. The carrier does include a pad to cushion your dog from the handle apparatus. It’s too small for Chloe, but would likely do well for a dog under 10 lbs. The Traveler, at 11.5Wx17Hx13L, is a bit roomier, but still within eyesight of the airlines’ limits; the Escort (9Wx17Hx16L) provides a different, and not particularly pleasing, configuration; the Traveler Plus (14.5Wx22Hx17L) is just too big for airplane use.

In the Company of Dogs offers The Clever Trolley as “airline carry-on approved,” but it’s really too large to go under a seat (9.5Wx21Hx15L — this is another product that lies on its back). Though the 9.5″ height isn’t too bad (especially since the ballistic nylon exterior has some give), the 21″ length is fixed and can’t be fudged. That’s a shame, because the trolley is very attractive, provides good ventilation and (as a bonus) can convert to a backpack.

The last carrier on our list is an intriguing oddball: a rolling carrier that can be collapsed (when not in use) to 3.5″ wide. Pawprint Essentials’ rolling pet carrier comes in two sizes, small (9Wx17Lx13H) and medium (9Wx20Lx13H). It has large ventilation panels on the top and three sides (the fourth side has a large storage pocket).  All of the edges are rigid, so there’s no fudging with this one: you’d be safest with the small size. I can’t think of a reason that I’d want the collapsibility feature of this carrier, but maybe you can.

[I wrote this post early in Dog Jaunt’s history. Since then, I’ve reviewed many more aspiring in-cabin carriers, so please look at the related posts (listed below) and my other blog, called Pet Carrier Reviews, for additional ideas.]