As you will soon learn, if you read back through this blog’s entries or glance through the posts on Dog Jaunt’s Facebook page, I’m a big fan of the large SturdiBag carrier for in-cabin airplane travel. It’s officially too large for many (most?) airlines, but because its top is so flexible, it’s worked on every flight we’ve taken with it. The part of it that isn’t flexible, however, is the base. It’s a solid 18 inches long — and because I typically choose to orient Chloe’s carrier left-to-right under the seat in front of me, I have to choose my seat carefully. 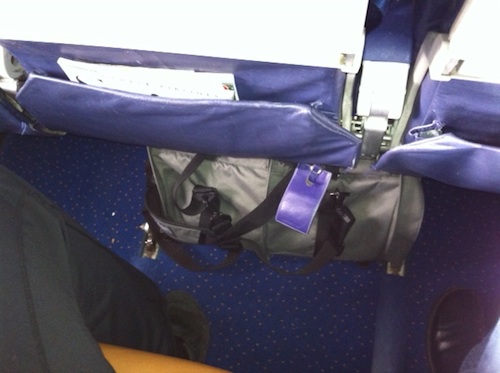 Why left-to-right? The front-to-back depth of most under-seat spaces is about 17 inches, and I haven’t wanted to vex the flight attendants, focused as they are on the “area around your feet.” On recent trips, I’ve turned Chloe’s bag front-to-back, so I can pat her more easily during takeoff and landing, but if I’m called on it, I want to have the option of being able to tuck her carrier away properly.

When you look at the under-seat measurements I’ve collected, therefore, you’ll see that I’ve gravitated towards the seats that provide the most under-seat width. A while back, a reader sent me a note with a fine idea: Why not saw off an inch of the foam board that stiffens the base of the SturdiBag? Chloe would never notice the loss, and it would have the happy effect of (1) making the carrier closer to an airline’s official maximums, should you meet an airline agent with a tape measure, and (2) allowing the carrier to fit in more under-seat spaces.

Here’s what you do: Unzip the compartment that holds the foam-core base, located just below the carrier’s mesh front door. Pull out the base and, using a box cutter and a straight-edge and a self-heal mat (or a layer of scrap cardboard), slice an inch off one of the short ends. My husband assured me that he’d really need to buy a circular saw to do the job right, but I’m on to his tricks.