I’ve reported before about the dimensions of the under-seat space available (in the main cabin) on a Virgin America A-320, but I neglected to take a picture of Chloe’s carrier in position. This time, I got the shot. Please note that I was sitting in Seat 14C, an aisle seat in the main cabin (here’s a floor map of a VA A320 for your reference): 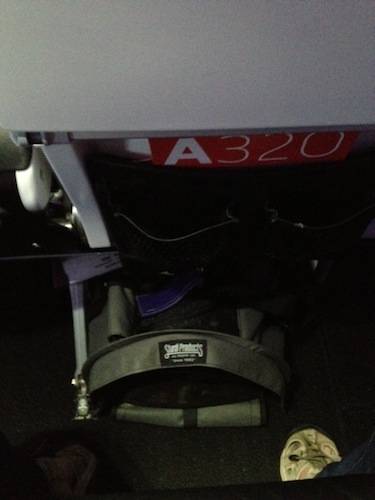 When I started writing this blog, I always oriented Chloe’s carrier left-to-right — it sticks out less that way, but requires a wider under-seat space to fit. These days, I orient her carrier front-to-back, since that allows me to keep a good eye on her, through the front panel, during the flight (plus it’s a little easier to reach my hand in to her during takeoff and landing, the parts of the flight she dislikes). That means her carrier sticks out a little more into my foot area, but it hasn’t been a problem. When the fabric flange on the front of the SturdiBag is patted flat, the front of the carrier is even with the metal seat legs. No flight attendant has ever expressed concern about that, but if you are concerned, I’d choose the middle seat instead on this plane, and orient your pup’s carrier left-to-right. I took a picture of that space too, for what it’s worth: 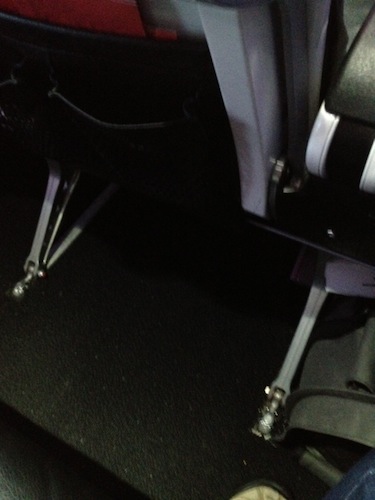 The under-seat space for Seat 14B — significantly wider, so Chloe’s carrier would fit oriented left-to-right (and would project slightly less into the foot area)

I’m tagging this post to add it to Dog Jaunt’s growing collection of pictures of carriers under plane seats, which will help people prepare for travel — and address gate- or ticketing agents’ concerns about the workability of a carrier. I’m also adding it to Dog Jaunt’s ongoing series recording under-seat plane measurements.