Under Section 1050.9 (h) of the Metropolitan Transit Authority’s (“MTA”) Rules of Conduct, pets may travel on NYC buses and subways if they are “enclosed in a container and carried in a manner which would not annoy other passengers” (as always, the container requirement does not apply to service animals).

The link to this provision changes from time to time, so I’ve taken a snapshot of it for your quick reference: 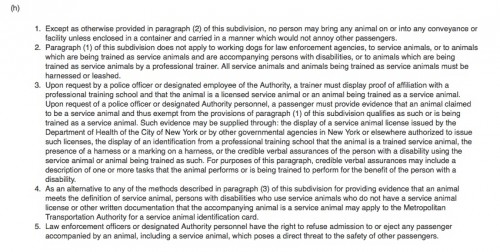 Similar provisions allow dogs in carriers on the Long Island Rail Road (LIRR), where your dog must be “properly confined for shipment,” and the Long Island Bus system (LIB), where “small pets may be brought on board if they are confined to an approved carrier.” [2/24/12 LIB is now operated by Veolia Transportation, and is called Nassau Inter-County Express (NICE). The customer service rep I spoke to told me that NICE has the same pet policy.]

I couldn’t find any definition of  “an approved carrier.” Practically speaking, however, it surely means a carrier similar to those required by the airlines, with sufficient ventilation panels and a waterproof bottom. It should be small enough to sit on your lap and not take up another seat.

I also couldn’t find anything written about Metro-North Railroad‘s pet policy (MNR), but the representative I spoke to said that pets under 70 lbs. are allowed as long as they are in a carrier or on a secure leash and do not cause a disturbance or pose a threat to others. The conductor is the final arbiter, if a discussion arises about your pet. [May 2011: The Metro-North web site has been updated since I wrote this post to include a pet policy: “Small domestic pets are permitted provided they’re carried in kennels or similar containers, or are securely controlled on leashes throughout the trip and do not annoy other customers. Pets should not occupy seats and are subject to approval by the conductor.” Chloe and I recently traveled on a couple of Metro-North trains.]

The Port Authority Trans-Hudson Corporation (PATH) allows dogs in carriers on its trains: “Unconfined animals except seeing eye dogs or other assistance animal are prohibited.”

Based on the comments I’ve seen on forums where people have discussed the hazards of NYC subway and bus travel with pets (see, for example, UrbanHound’s “Hound Talk”), I strongly recommend putting your dog completely into her carrier and closing the top before you enter the subway, and keeping her contained in her carrier for the entire journey.

I also suggest printing out the relevant passages from the MTA, LIRR, LIB or PATH rules and regulations, and tucking them in a pocket of your carrier, for those maddening times when you encounter a driver or employee (or fellow passenger) who’s not aware that small dogs in carriers are acceptable. If you don’t prevail, though, consider the practical advice of a fellow traveler: “I just waited for the next bus.”

[6/12/11 Carol Vinzant from AnimalTourism.com pointed me to a post she and her husband wrote about taking their two dogs, a combined 60 lbs. of lively Beagles, on several modes of NYC-area transportation, including taxis, the subway, the LIRR and the Fire Island ferry — good tips, useful info!]