Chloe and I took planes, trains, and automobiles together on our recent trip around New England — and when I say trains, I mean Metro-North commuter trains, since Amtrak doesn’t allow pet dogs on board. After driving around Massachusetts and New Hampshire and New York and Connecticut for a couple of weeks, I planned to meet my husband in Brooklyn, and since I will not drive anywhere near Manhattan, I opted to drop off the rental car in New Haven and catch a Metro-North train to the city. A couple of days later, the two of us (well, three, including Chloe), took a day trip to Danbury for an appointment in southwestern Connecticut.

I’d known for a while that pet dogs, either in a carrier or on a leash, are welcome on Metro-North trains, but this was the first time I’d put theory into practice. Both trips were easy — our fellow passengers and the train personnel didn’t turn a hair over Chloe, and she seemed perfectly comfortable. Here she is in her carrier, waiting in New Haven for the train to start moving: 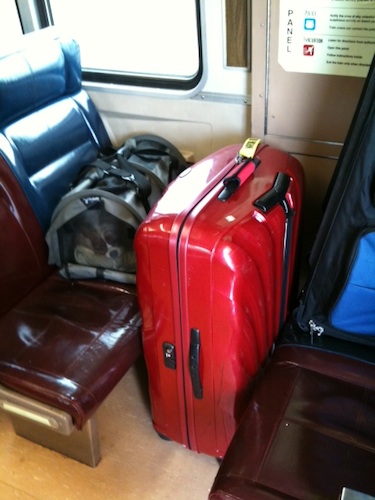 Chloe stayed in her carrier on this trip, but during part of our second trip, a day trip to Connecticut, she sat (leashed) on my husband's lap

The other thing you see in this picture are the two enormous suitcases I was traveling with, and putting them on the seat and floor next to me was only one of the many newbie mistakes I made. If you’re traveling with big suitcases, put them in the train car’s vestibule. To look like a pro, extend the handle of your roller bags up behind the railings that line the vestibule: 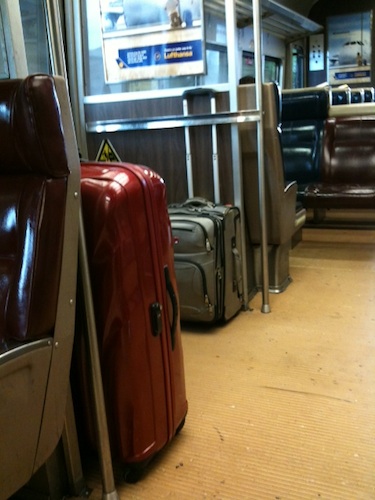 The grey suitcase on the far wall belongs to a seasoned Metro-North traveler. Chloe's red suitcase, on the near wall, was sometimes in that location, but more often elsewhere....

Tragically, the handle of Chloe’s big red suitcase doesn’t fit behind the railing. Her suitcase also has wheels on the bottom, and those two facts meant that it shot around the vestibule whenever the train suddenly slowed or turned. I’ll just say that my fellow passengers were very patient and understanding, and I got a lot of exercise.

I should also mention that while Chloe’s carrier was on the seat next to me when the train was empty, I put it on my lap as the train filled up.

[May 2012: We took another trip on Metro-North, and this time Chloe traveled on my lap — allowed, as long as she stays on your lap and doesn’t ooze down onto the seat next to you. So pleasant — I do wish Amtrak would follow suit. Please note that on this trip, I lashed the handle of the big red suitcase to the vestibule’s railing with the detached strap of Chloe’s carrier. Worked like a charm.] 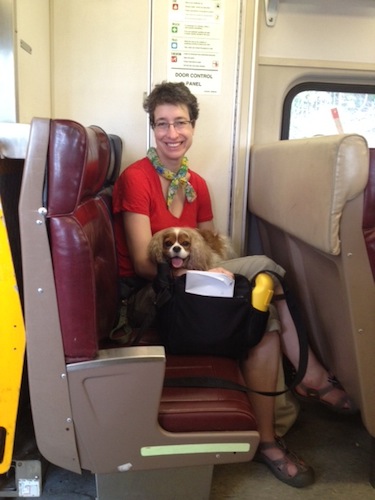 The Metro-North trains are not luxurious, or even particularly comfortable, but they are perfectly serviceable, and I’d travel again on them in a heartbeat. The system is remarkably large, extending to New Haven in the east (with the option of connecting to Shore Line East trains, which allow pet dogs in carriers on board, and continuing to New London, CT), and Wassaic, Poughkeepsie and Port Jervis in the north. There is no pet fee. The station stops are brief, so do not count on them for bathroom breaks (for you or your dog!). There are no bathrooms on board [I’m wrong, there are — please see Emily’s comment below], nor is food available, but you are apparently welcome to bring food and drink onto the train — moments after I took the pictures for this post, a woman sat down across from me with a bottle of white wine and a gigantic prosciutto sandwich, finishing both, with perfect timing, as we pulled in to Grand Central.