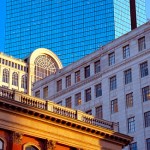 The Massachusetts Bay Transportation Authority (MBTA) shuttles passengers around the Boston area by subway, bus, boat and commuter rail. The MBTA representative I spoke to said that “T” refers to all four transportation systems, which was news to me — I thought it was just the nickname of the subway. (Please note that poor Charlie was trapped on the “MTA,” which stands for Metropolitan Transit Authority and is what the MBTA used to be called.)

Service animals are allowed on the T at all times.

During off-peak hours, non-service dogs are allowed at the discretion of T vehicle operators. Dogs must be properly leashed and are not allowed to annoy riders or take up a seat.  For safety and convenience during rush hours, small domestic animals must be carried in lap-sized containers.

I confirmed by phone that this policy applies to all four transportation systems run by the MBTA.

As always, I strongly recommend that you put your small dog entirely into her container and keep her there for the entire journey. The MBTA’s language doesn’t specifically say that your dog’s head can’t poke out (compare Washington D.C.’s public transit pet policy, requiring that your small dog be “in a secure container as long as there is no possibility that the pet can get free”), but putting her in a carrier with a zipper (and using it) may save you a tedious discussion with an uninformed T employee or fellow passenger. For the same reason, I also suggest that you print out the MBTA’s pet policy and tuck it into your carrier.