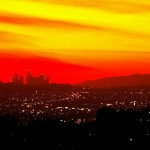 I spoke with a LACMTA customer service representative and learned that Metro allows pets on all of its bus and rail lines if they are in a carrier. There is no fee for your pet, but the carrier must be hard-sided. That’s the first time I’ve heard that requirement, and if you own a soft-sided carrier I’d give it a try before buying a new one just for Metro trips — I also suggest that your existing carrier is more likely to be overlooked if you’re careful to put your pet entirely into it before you get on board, and you keep her entirely enclosed while she’s traveling.

Metrolink operates a commuter rail service serving Los Angeles County and several neighboring counties (San Bernardino, Riverside, Ventura, Orange, Los Angeles and North San Diego to Oceanside). Metrolink’s pet policy, according to the customer service representative I spoke with, is that pets fully enclosed in carriers are allowed. The carrier must fit in your lap or under your legs. There is no fee for your pet.

There are lots of other public transit providers in the area. Here are the better-known ones, with information about their pet policies (please note that where I have not given you a link, I got the pet policy information in a phone conversation):

Alhambra Community Transit (ACT) operates buses in an around Alhambra, CA. Only service animals are allowed on board.

Big Blue Bus provides “bus service to Santa Monica and the west side of Los Angeles.” BBB’s pet policy is as follows: “All animals, except guide or service animals, must be in a pet carrier.”

DowneyLINK operates buses in and around the city of Downey, CA. Only service animals are allowed on board.

El Monte Transit operates buses within the city of El Monte, CA and provides connections to Metrolink (at the El Monte station). Only service animals are allowed on board.

FlyAway Bus provides bus service to LAX from the Van Nuys Airport, Union Station, and Westwood. Small dogs in carriers are allowed; you may have to pay full fare for your dog (you certainly will, if her carrier occupies a seat).

Glendale Beeline operates buses within the city of Glendale, CA and provides connections to Metrolink. Small pets fully enclosed in carriers are allowed.

Norwalk Transit operates buses in Norwalk, CA and nearby areas of southeast Los Angeles County. Pets in carriers small enough to rest on your lap are allowed on board.

OmniTrans (or “Omni”) operates buses within San Bernardino County and in parts of neighboring Riverside and Los Angeles Counties. Omni’s pet policy states: “Pets may only ride the bus if they are in a secure pet carrier that fits on your lap.”

Pasadena Area Rapid Transit System (ARTS) operates buses in and around Pasadena, CA. Only service animals are allowed on board.

Pass Transit operates buses in and around Beaumont, CA. Its pet policy is as follows: “The only animals allowed on the bus are service animals and small animals in secure pet carriers.”

Small pets and non-service or guide animals are allowed only if owners comply with the following rules:

The animal must not interfere with, disrupt or disturb any service or guide animals on the vehicle.

[2/24/12 Checking back on the site, this language has disappeared. However, the Dial-A-Ride part of the site states that “Small pets are allowed if they are secured in a pet carrier that can be safely placed on a customer’s lap.”]

Thousand Oaks Transit (TOT) “operates four routes serving Thousand Oaks, Newbury Park and Westlake.” When I first wrote this post, its pet policy stated that “Small pets in covered, well-secured cages are allowed if held on the passenger’s lap.” That language is no longer on its site, as of 2/24/12, but the customer service rep I spoke to told me that small pets in carriers are still allowed on board.

Victor Valley Transit Authority (VVTA) “provides local bus service for the communities of Adelanto, Apple Valley, Hesperia, Victorville, and San Bernardino County.” Pets in carriers small enough to fit on your lap or under the seat are allowed.