An earlier version of this post is one of Dog Jaunt’s top hits — clearly, it’s a question that a lot of you have, but the info in the old post was getting dated. Here’s a re-do, with fresh information.

Nowadays, only two major U.S. airlines will sell you an in-cabin carrier: JetBlue and Southwest. Please note that while AirTran and United say they do, I learned yesterday from customer reps that AirTran has in fact discontinued that service, and United sells only hard-sided carriers for cargo transport. Alaska Airlines used to sell in-cabin carriers at some of its ticket counters, but no longer.

The carrier that JetBlue sells reportedly weighs 2 lbs. and measures 16″ long x 8-1/2″ high x 10″ wide. It costs $50. It has zippered openings on one end, one side, and the top; there are a respectable number of mesh ventilation panels; and one of them is located on the carrier’s top, so you can see your pet while she’s at your feet (as she will be during most of your travels). 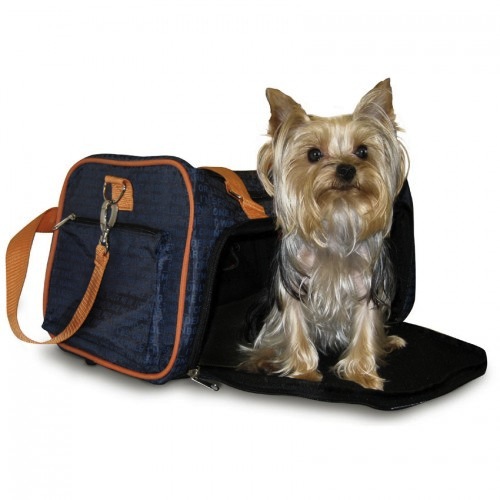 It is, however, and as JetBlue itself points out, “a small pet carrier” (emphasis in the original). The height of a carrier should be the same (or about the same — on a few occasions, Chloe has traveled in carriers an inch or two shorter than she is) as your dog’s height at the shoulder. In a JetBlue-sized carrier, I wouldn’t try anything larger than a Chihuahua or a Pomeranian or a Yorkie (as pictured).

We often fly with Chloe on JetBlue (our preferred airlines, given where we live and where we go, are JetBlue, United, Southwest, and Virgin America). She’s 12″ tall, about 16″ from nape of neck to base of tail, and weighs 13 lbs., and would never fit in the JetBlue carrier. She typically travels in a large SturdiBag carrier, which measures 18 L x 12 H x 12 W inches.

If you look at Dog Jaunt’s growing collection of airplane under-seat space measurements, you’ll see that the best seats on a JetBlue A320 for a traveler with a pet have under-seat spaces that are either 10″ or 11″ tall (on an E-190 the space is 9″ tall). The large SturdiBag works because its top and sides are extremely flexible (also, Chloe does not fill it completely, and prefers to travel lying down and curled up, so there’s room for the carrier top to flex down into).

I started out pooh-poohing the carrier that Southwest sells, but they changed its design a while back, and a reader sent me a great mod that I’ll soon post, and now I’m much more positive about it. It measures 18.5″ L x 13.5″ w x 8.5″ h — but it has a top gusset that expands to add 2″ to its height, bringing it up to a respectable 10.5 inches. It costs $48. The gusset tends to droop downwards; the modification I’ll post keeps the gusset elevated. It has a lot of mesh ventilation panels, and, again, one of them is on the top, so you can look down into it at your pet. 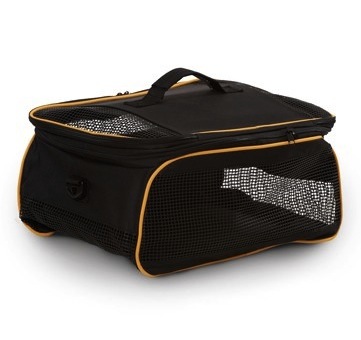 That’s a nice-sized carrier — a little longer, in fact, than the one Chloe uses, and and inch and a half wider. If I only flew on Southwest, and if Chloe were just a bit shorter, I’d buy their carrier, and install the mod.

Since we do fly on other airlines, I prefer Chloe’s large SturdiBag. I like the quality of the SturdiBag, and I like the extra inch and a half of height it offers. It fits comfortably onboard (as you’ll see when you look at the measurements actual travelers have recorded, Southwest’s under-seat spaces provide more headroom than the simple 8.5″ listed in the airline’s official measurements). Other airlines might react negatively to the Southwest carrier, since it is so wide.

Sherpa’s Pet’s Guaranteed On Board option

Guaranteed On Board (“GOB”) is officially a creature of the Quaker Pet Group, but of their brands, you’re most likely to know Sherpa’s Pet Trading Co., maker of the soft-sided carriers that started the soft-sided carrier movement. Frankly, I don’t like their carriers. The one I’ve minded least is the Delta Deluxe carrier we bought to bring our cat Cora home from Ohio, but even still, it’s got flaws.

Nevertheless, the Sherpa carriers are popular, and if (1) you have a small pet who complies with an airline’s official maximums, and (2) you’re nervous about your upcoming trip and would love to take some of the worry out of it, you might want to consider the GOB program.

Here’s how it works: Sherpa represents that certain of its carriers are acceptable on certain U.S. airlines. If your dog fits in an approved carrier for a particular airline, and yet you are still prevented from boarding with her, Sherpa will refund you the cost of your flight plus your pet travel fee. Please note that there is a form to fill out (click on “Airline Forms” in the menu at the top of the main GOB page), which will generate a certificate that you will need to bring with you to the airport on the day of travel. Please also note that there is a long list of exceptions and caveats. I have no data to give you about how many submitted claims are actually paid.

I have not used the program myself, because (1) I don’t like Sherpa carriers, and (2) Chloe is too large for the small Original Deluxe, American Airlines Duffle, or Element Duffle carriers, the only ones Southwest accepts under the program. She does fit in the Delta Deluxe carrier (the same one our new cat Cora used), so if I were nervous about traveling with her on American, Delta, or United (all of which accept that carrier under the GOB program), I’d dust it off and use it — and fill out the GOB form.

That’s getting confusing, so let me take a step back and break it down by airline. Here are the Sherpa carriers that each will accept under the GOB program:

If you have a large small dog like Chloe, the only parts of this program that will interest you are American, Delta, and United. If your dog is a very large small dog, American drops off the list, because they have an upper weight limit of 20 lbs., and you’re unlikely to get a GOB refund when your dog+carrier is over the maximum weight. If your dog is that large, in fact, it’s probably also unlikely that you’d get a GOB refund for a Delta or United flight, though the basis for denial of boarding would instead focus on how your dog fits into the carrier.