When you’re looking for an in-cabin pet carrier, one option you’ll likely consider is buying a carrier sold or approved by the airline you’ll be flying on. Five U.S. airlines will sell you carriers, two others have commissioned Sherpa to make carriers in approved sizes, and eight airlines (nine, if you count Northwest) have partnered with Sherpa in a “Guaranteed On Board” program based on Sherpa’s regular line of carriers. Take a look at the choices, and see what you think. 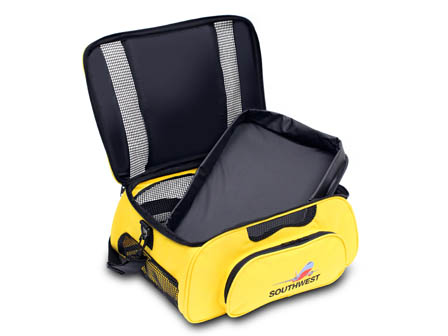 Southwest too sells its own pet carrier, for slightly less ($45). It measures 18.5″ long x 8.5″ high x 13.5″ wide. (The link I’ve given you takes you to the “Freedom Shop,” which is apparently under construction right now.) The description states that it expands to 10.5″ tall.

AirTran sells in-cabin carriers at “many” of its counters “for a nominal fee.” The customer service representative that I spoke to told me that the carrier they sell is Petmate’s Cabin Kennel Solid Top carrier, a hard-sided carrier measuring 17″ long x 8″ high x 12″ wide. This carrier, like Southwest’s carrier, is really an odd shape — it’s no wonder that the only animal you see pictured in carriers like these are reclining cats.

If you compare the measurements of the carriers these airlines offer against the actual under-seat space available on their planes, you’ll see that you can do better, particularly as far as height goes.

A carrier that is 7.5-8.5″ tall will allow only the tiniest of dogs to stand up and turn around, which all of these airlines require an in-cabin pet to be able to do. Trying to come up with a list of dogs that are 8″ tall at the shoulders? (For carrier height, you measure to the top of your dog’s shoulders, not to the top of his head.) Think toy Poodle, or a small Chihuahua or Pomeranian, or a Dachshund.

But a dog need not be a toy breed to travel in-cabin on these airlines’ planes. The JetBlue planes I’ve been on had under-seat heights of 9″. A Dog Jaunt reader reported that Alaska’s under-seat space is 10″ high. Southwest’s under-seat space is 11″ high at the front (shortened by a life jacket container to 9.5″ at the back). I haven’t collected measurements from AirTran or Continental yet, but I would be surprised if they were markedly different from their peers. Chloe’s large SturdiBag (and no, I do not get a kickback from SturdiProducts!) has a flexible top, so even though it’s 12″ tall, it tucks into the actual space available. Chloe’s other favorite carrier, the Sleepypod Air, has a less flexible top, but it can be wedged into spaces that are as low as 9″ tall.

Please also note that of the listed airline carriers, only Southwest’s is 18″ long. All the rest are 16-17″ long. They just don’t need to be that short. Again, I don’t have width measurements for AirTran and Continental’s under-seat spaces, but an 18″ long carrier will fit comfortably into the actual available space on the other airlines (please check Dog Jaunt’s reports to select the seat with the widest under-seat space).

As soon as possible after take-off, I pull Chloe’s carrier out so that her carrier is below my legs and my feet are in the under-seat space. Although Chloe typically curls up, I want her to have sufficient room to stand up and turn around from time to time. Choosing a larger carrier with a flexible top makes that possible. You run the risk that your carrier will be rejected by a ticket- or gate-agent, but so far I’ve been able to demonstrate that Chloe’s carrier will flex to fit.

Delta’s Sherpa carrier looks like a “Sherpa Original Deluxe Bag,” but its measurements (one size only) fall between Sherpa’s usual medium and large sizes. The Delta carrier measures 18″ long x 10.5″ high x 11″ wide. This carrier is more reasonably sized than the five I listed above, and is worth considering if you’re a frequent Delta flyer. It has the Sherpa features I don’t like, but you might like the comfort of knowing that your carrier will sail past any Delta ticket- or gate-agent.

American has three approved Sherpa carriers. The “American Airlines Standard Navy Carrier” is simply a medium Sherpa bag with the AA logo on its tag and strap. It measures 17″ long x 10.5″ high x 11″ wide. The two AA “duffle carriers” are sportier-looking; the medium is the same size as the standard AA carrier, and the small is 16″ long x 8.5″ high by 10″ wide.

I haven’t yet measured any of American’s under-seat spaces, but I do have American’s policy at hand, and here’s the wacky thing: American’s stated maximums are much different than the measurements of their AA-branded Sherpa bags. According to American’s web site, “the maximum size for cabin pet carriers is 19″ long x 13″ wide x 9″ high. Soft-sided pet carriers such as Sherpa bags may exceed these dimensions slightly because they are collapsible.” If I were you, I’d choose the large SturdiBag for my pet instead of the American carriers from Sherpa — it’s 18″ long and 12″ wide, both under the airline’s maximums, and its 12″ height flexes to be much lower on demand. Heck, you could even choose the large Sherpa carrier: At 19″ long x 11.75″ wide x 11.5″ high, it’s a monster, but it meets American’s written maximums.

Sherpa’s Guaranteed On Board program

Nine airlines (eight, really, since Northwest has been absorbed into Delta) have partnered with Sherpa in a program where, if you jump through some hoops correctly, Sherpa will guarantee that your pet will be allowed on board.

Here’s how it works. Starting at the home page for the program, you choose your airline (AirTran, Alaska, American, Continental, Delta, United, U.S. Airways, Southwest) and fill out the provided form. If you answer the questions accurately (don’t be tempted to minimize your pet’s weight and height), the answers are within the airline’s maximums, and you are denied boarding (there are a bunch of exceptions, so read the fine print), Sherpa will refund the cost of your airplane ticket and your pet fee.

Please note that while the forms for AirTran, Alaska, Continental and Delta all initially allow you to choose a large Sherpa carrier, if you choose the large size you will ultimately receive a message saying that those airlines do not accept a carrier with those dimensions. The customer service representative I spoke to agreed that that’s wacky.

Speaking of wacky, please note that under this program, Delta accepts only small and medium Sherpa bags. However, Delta’s own Sherpa bag, specially commissioned, is larger than a medium Sherpa bag! If you fly frequently on Delta with your pet, buy a Delta-branded Sherpa bag and pass on the G.O.B. program.

I would only take advantage of this program if I had a very small dog (and therefore wasn’t concerned about carrier size) and I was extremely risk-averse. Otherwise, you’re giving up valuable under-seat real estate. Southwest, for example, does not have a stated maximum carrier size — it just tells you the measurements of its under-seat spaces, and lets you buy a carrier accordingly. Those spaces will accommodate a larger bag than a small Sherpa bag — we travel regularly on Southwest with Chloe in a large SturdiBag carrier, and because its top is rounded and flexible it fits comfortably in front of the lifejacket container (the Southwest under-seat space is reduced to about 9-9.5 inches in the middle by a hard lifejacket case). I do have to travel in a middle seat (or a window seat, with some wedging) to make it work, but it gives Chloe more room than a small Sherpa bag.

All three of these options are designed to give you peace of mind: If you buy a carrier approved by your airline, and your dog fits in it to the airline’s satisfaction, your worries are over. If you are risk-averse and have a very small dog, you may want to pursue one of these options. However, many of the approved carriers don’t take full advantage of the under-seat space that’s actually available. If you have a larger small dog (in the 10-15 lb. range), consider instead buying a carrier that can flex to fit in an under-seat space shorter than your carrier’s height, knowing that you’ll move it under your knees during flight.