I was surprised to read this message, since my husband’s walk-by view of a United 757-200’s under-seat space in First Class had been deeply discouraging. Reader Anne reports, however, that she and Erin, her black & tan Cavalier King Charles Spaniel, both traveled comfortably in First Class on a United 757.

They flew from Washington D.C. to San Francisco (heading to a dog show in Carmel). Erin, at 15 lbs., fits nicely in a large SturdiBag: 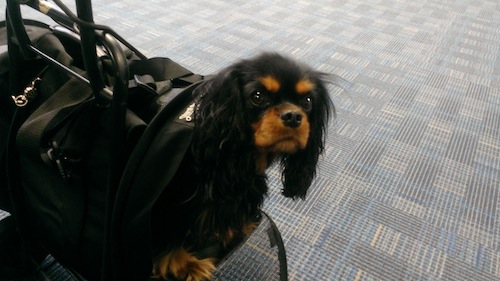 I’m not a bit surprised that Erin did well at her conformation show — what a beauty!

She and her carrier also fit nicely, Anne says, in the space under the window seat on their United 757 (presumably not a -200 series, but United has so many 757 options that I can’t begin to guess which kind they were on). Here’s a picture of Erin and her large SturdiBag in position: 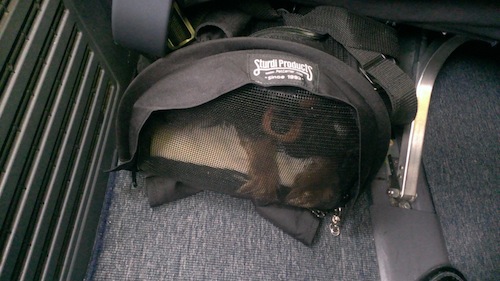 “I didn’t take measurements of the under seat area, but the SturdiBag fit quite well – no problem. The flexibility of the top of the bag helps. However, one thing to note – this is the first time I have used a SturdiBag. I have an older Cavalier – Robbie – who will be 8 years old in August. He and I have flown cross country about half a dozen times using a Large Sherpa. Robbie is a big boy. 26 pounds on a good day! He was 17 ½ pounds when he was 6 months old so just a big-boned and extremely muscular Cavalier. That said…he fits snugly in his Large Sherpa. Without exception, however, I have always flown First Class or Business. In all cases, I always book a window seat. That way I can put the bag up against the side of the plane and while it sticks out some, I have never had any flight attendants question it.”

Anne always flies on United, she tells me, “and really without exception, [has] had no issues traveling with either Erin or Robbie.” The take-home lesson, therefore, is not to lose hope over traveling First Class, even in a United 757, but rather to find out from United whether the plane you’re considering taking has an open space like the one Anne photographed.

Tip for wheeling a dog carrier around airports

For Anne, the challenge of plane travel is not the flying part, but rather the part where she’s lugging her dogs around the airport:

“I don’t care if your dog is 15 pounds (like Erin) or 26 pounds like Robbie, it’s tough to haul a dog in a bag. My ‘secret’ – which I don’t really think is a secret – is to have one of those folding luggage carts (looks just like this). 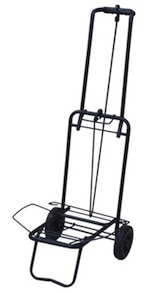 I set the bag on this, secure it with the bungee cords and we roll right through the airport. It’s such a big help and then just folds up when you get to the gate and loads on the plane in the overhead. I fill a backpack with my stuff and treats, etc. for Robbie/Erin and that’s all I take on the plane.”

Thoughts about the SturdiBag

“I decided to try the Sturdibag after reading posts on Dog Jaunt and other places. I definitely like it for Erin as she is smaller and the bag itself is much, much lighter than the Sherpa. As I said, I do like that it’s flexible.”

“Erin did great. Quiet as a mouse. We had a funny incident happen on the way home from San Francisco to Washington, DC. About half way through the flight, I got up to use the bathroom. Just as I was stepping up, the Captain came out of the cabin and got there before me. So, I went and stood in between First and Economy sections, stretching my legs, waiting.

About 10 minutes went by (not sure what the Captain was doing in there) and all of a sudden, I look up and see a little black body running down the aisle. Erin, known to be a bit of Houdini when it comes to escaping from soft crates, had wriggled her way out. No doubt, she was a little worried that I had not returned to my seat promptly. Up to that point, she had quietly hung out and/or slept in her crate and had shown no signs of wanting to get out. But, you know how some Cavaliers can be – always want to be with you! I quickly grabbed her and no passengers seemed to notice, except the flight attendant gave me a wry smile.

I put Erin back in her bag, successfully made it to the bathroom and when I came out, another flight attendant (who had missed the whole scene) was there and said, ‘I heard I missed your baby…can I see her???’ I, of course, obliged. Went and got Erin who proceeded to sit on the jump seat with the flight attendants all petting her for another 10 minutes or so. Erin thought she had died and gone to heaven!”

What a great story — and how kind of the flight crew not to scold Anne (no doubt they recognized that she was as surprised as anyone by Erin’s appearance, and acted rapidly to fix the problem). Thank you so much, Anne, for all the info (I am adding this post to Dog Jaunt’s ongoing series recording airplane under-seat measurements) and for the excellent luggage cart suggestion! I am always looking for ways to roll, rather than carry, Chloe, and this is such a straightforward approach.

I am also tagging this post so that it shows up in Dog Jaunt’s collection of photos of carriers in place under plane seats. To see others, click on “Pictures of carriers on planes,” which appears under “Topics” when you click on the big “Taking your pet on a plane” button at the top of the page.