Yet again, I have you guys to thank for this one: What did I think of The One Bag, asked reader [Maureen] ? I scrabbled around on Google, found the bag, and thought that I’d really like to see it in person. I was intrigued because, like the Kobi Pet Carrier I reviewed in March, the carrier expands in length on demand. Unlike the Kobi carrier, it can be collapsed into a tidy rectangular packet for storage. The folks at One for Pets kindly agreed to send me one to poke and prod, and it arrived last week. I have not been paid for this review, and I did not promise (and One for Pets did not request) that it would be positive. The One Bag carrier costs more than $50, so I will be giving it away to one lucky Dog Jaunt reader (total value: $140). I’ll provide the giveaway details in a separate post on Monday, May 7, 2012. 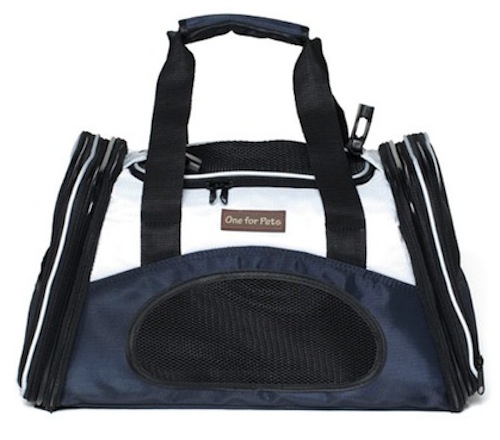 Photo by One for Pets

The carrier arrives in its storage bag, collapsed into a rectangle 19″ long, 12″ wide, and 3″ deep. 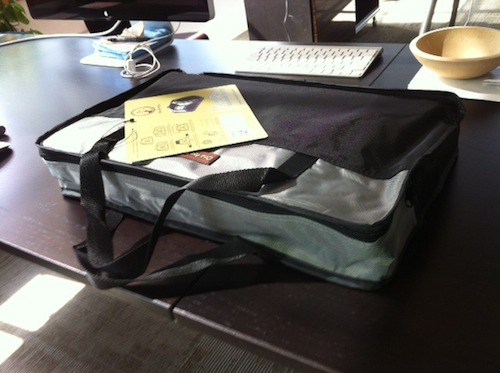 The One Bag, collapsed, in its storage bag

Assembled, the large size measures 20″ long at its base, and 14.5″ long at its top (the ends are therefore angled, as you can see in the first picture above). At its base, the carrier is 11.5″ wide, narrowing to about 9.5″ wide at its top. At each end, the carrier is indeed 11.5″ tall. Between the ends, however, it’s more like 10″ tall (but see below). Each end can be unzipped so that gussets provide more length. Each adds about 2.25″ of extra room. (The padded insert that stiffens the bottom of the carrier has two short wings, normally folded under and secured with Velcro tabs, that can be extended to fill the new spaces.)

The One Bag is made of ballistic nylon and comes in olive, navy and black (the site also shows a brick color, but that’s apparently not currently offered). It has generous mesh ventilation panels on four of the five possible sides; the fifth side is occupied by a luggage handle panel, created when two parallel zippers are unzipped. Behind them is a very clever seat belt solution, allowing the bag to be secured with the lap portion of a car’s three-point belt.

There is a pocket on one of the ends — not huge, but big enough for a roll of poop bags, a minimal leash, and your pet’s travel papers, folded into quarters. Access to the bag is via either end (both of which have zippered doors). The top, too has a zippered opening, but it would be a tight fit for a pet. It wins points from me, though, for being see-through mesh and for the zipper, which allows you to reach in easily and pat your pet.

The shoulder strap has a comfortable pad. It clips at either end with a sturdy nylon buckle, so you won’t be using it as an emergency leash (unlike the Kobi carrier’s strap). There is a tether sewn inside, at the top of one of the long sides. This carrier is all about zippers (there are three on each end, three on the sides, and one on the top), so it’s a very good thing that the zippers are good-quality and function smoothly. 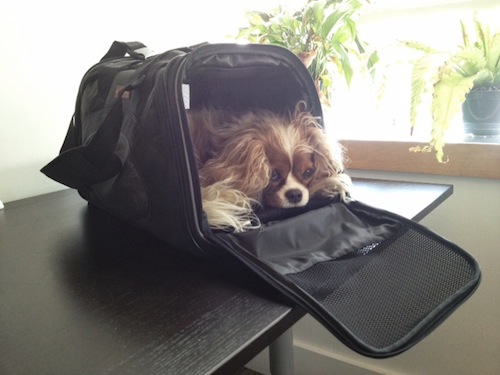 Chloe in the large One Bag, not yet extended at either end

As you can see, Chloe is very comfortable in the large-sized One Bag. What you can’t see is that she chose to remain it it for, literally, hours after I took her picture. She was interested but not alarmed by the activity involved in extending the ends while she was inside the carrier; even the ripping Velcro sound of the base extensions being unfolded didn’t seem to upset her. She was content even before the extensions were deployed, but willingly stretched out to fill the full space when it became available to her. I would have no problem carrying her in this bag, since although the bag is 10″ tall at the height of the support “beams” that run along the long sides of the carrier’s top, the top panel itself will easily lift up another 1″ to 1.5″ as your pet pushes against it.

Will it work as an in-cabin carrier? The small size would work like a dream, no question. The large size is iffy. Its height would work, I think, in most situations. Because the ends are the same height and width, turning the bag on its side doesn’t solve any problems (and in fact, the rectangular padded base would not work on a trapezoidal side). The ends are tall, and stiffened, but the middle part of the top panel is significantly shorter. It, too, is stiffened (with the support “beams” I mentioned in the last paragraph), but those bars are only 10″ off the ground — and without too much effort, you can press them down to about 8″ off the ground. The panel suspended between them is unsupported, so would mold itself readily around an under-seat electronics box.

You cannot, however, shorten the padded base of the carrier (compare the SturdiBag, where you can access the stiffener and saw off an inch if you like), so you’re stuck with the basic 20″ length. That’s a long bag, comparable to the extra-large SturdiBag, which sticks out significantly into your legroom area. On balance, I’d choose to use the large One Bag carrier as a car travel bag, or a bag that I’d take on the bus or other public transit, and then use at work as my pet’s day lounge. If you own a pet that is 9″ at the shoulders or less, you should give serious thought to buying the small One Bag for an in-cabin carrier.

This is a good, quality carrier — a lot of thought has gone into its design, and the construction is impressive. When I started writing this blog, I jeered at collapsible carriers (what need? was essentially my attitude), but I’m not jeering any more. The One Bag returns easily to its storage bag, and that’s a very nice feature indeed.