This is a new low. Previously, I hung my head in shame over “Snapshot Saturday,” but even that sounds good next to “Montage Monday.” Everything’s all ahoo right now — brace yourself for a Chloe’s Clicks tomorrow (two days after its usual Sunday slot).

I wanted to make sure that you all see this photo that reader Adam sent. He read the post about pushing back when your pet’s carrier is “too big,” and took it to heart (read the comments and you’ll see what I mean). He posted a photo on Dog Jaunt’s Facebook page of his Cocker Spaniel’s XL SturdiBag in position under his seat on a United 767-300, and kindly agreed that I could re-post it here: 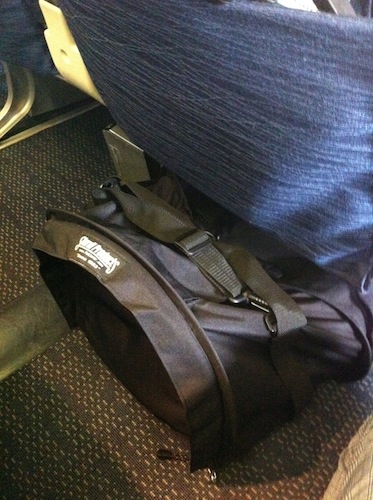 As you can see, it’s a risky proposition. While Adam and other Dog Jaunt readers have succeeded in traveling with an XL SturdiBag, it occupies a substantial amount of real estate, and a flight attendant could well object. Given how long the bag is (20″), turning it sideways isn’t an option unless you shorten the floor stiffener by 2-3″ — which is doable, though it will make your bag sag a bit on the ends (I’d center the shortened stiffener under the body of the carrier).