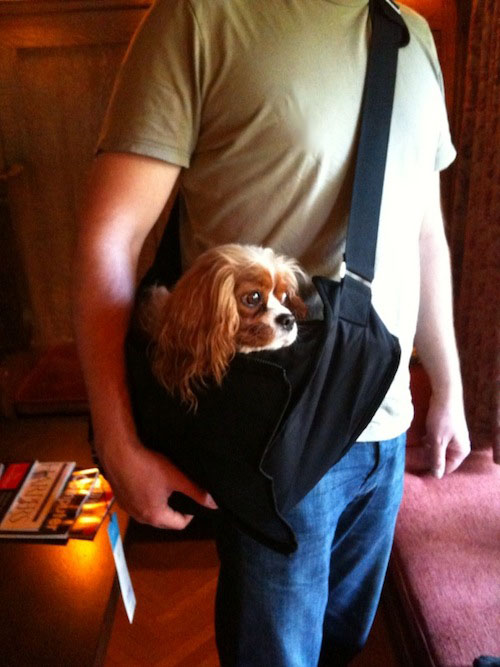 Chloe in the large Fundle sling

Longer ago than I’d like to admit, a reader wrote to me and asked what I thought of the Fundle pet carrier. She wanted a stealth bag for her Cavalier King Charles Spaniel, but thought that the PetEgo messenger bag I’ve recommended would be too big for her (she’s petite, and she has some neck/back problems). I’m on it, I told her, and I sent away for a large Fundle carrier (the carrier is available in Mini, Standard and Large).

As you can see from the picture, it too is an over-the-shoulder carrier. Its particular claims to fame include its shape, which cleverly supports your dog in a comfortable sitting posture, and a heavily-padded rim on which she can rest her chin. Chloe did indeed seem to find it comfortable to sit/lie in the carrier, with her chest fully supported by the sloping bottom of the bag. That feature gives this carrier a distinct advantage over, for example, her Wagwear tote.

I don’t know what she thought of the cushioned pads around the rim. They are somewhat rigid, and although they curved out of the way when I left the carrier open on top, when the stealth cover was zipped into place they pressed closely around Chloe’s face. She didn’t like that at all. A smaller dog might feel less trapped by the cover (which does have a nice ventilation panel, providing air and some visibility). Chloe, however, is at the upper limit of what even the large-sized bag will hold. To fit in the bag, she pretty much had to have her neck and head poking out the top.

It’s an effective stealth bag with the cover zipped in place, especially in black. I like the four generous outside pockets, and I like how it’s made. It’s also quite light. Unfortunately, although the shoulder strap is nicely padded, the padded area is fixed in place — so if you (like me) are tall and have to extend the strap to its longest length, the padded area shifts off your shoulder and hangs uselessly behind your back.

If you are petite and your dog weighs, say, 10 lbs. or under, this is a carrier to consider. You’ll have to get her accustomed to the zipped cover over time — I would not count on your dog taking to it straight out of the box. For a dog Chloe’s size, I still prefer the PetEgo messenger bag. Please note that the Fundle sling will not work as an airplane carrier — it’s meant for short trips around town, and doesn’t give your dog the space to turn around that an airplane carrier is required to provide. The ventilation panel, too, is really too small for a long trip.