This is my lowest moment as a blogger. Reader Jennifer, the source of two terrific reports in 2011 (a review of Bellevue, WA’s Sheraton Hotel, and suggestions for dog-friendly activities in and near Bellingham, WA), sent me this report last August. Yes, that’s August 2011. It won’t surprise you that one of my resolutions for 2012 is to defeat my in-box, and this is where the war begins.

Jen and Troy, you’ll recall, own a captivating Cavalier King Charles Spaniel named Sophie, and the three of them traveled from the Pacific Northwest to Sacramento, for a vacation in the Shenandoah Valley wine country — about 45 minutes east of Sacramento. I’ll put their report about the pet relief areas at the Bellingham and Sacramento airports in a separate post; this one is about their wine country break, and includes a couple of tips about flying with an in-cabin carrier.

Frankly, it was news to me that there’s a Shenandoah Valley in California. Now I’ve learned that it’s an AVA (“American Viticultural Area”) comprising bits of California’s Amador and El Dorado counties. As Jen points out, it’s a fine day trip from Sacramento, or a destination trip in its own right.

“Sophie had a lovely time in the Shenandoah Valley Wine Country about 45 minutes from Sacramento, California. She enjoyed tromping through the vineyards, exploring the tasting rooms, and eating her kibble lunch by the reflecting pool. We had yummy bistro fare, at award-winning Villa Toscano and Bella Piazza Wineries (full-disclosure: these are owned by people we know well).

Owners Jerry and Erika would love it if you brought your well-behaved, leashed, dogs with you to a wine tasting, barrel release party, or for a relaxing dinner overlooking the vineyards, fountains, and ponds outside at the bistros at Villa Toscano or Bella Piazza. These two wineries and vineyards are completely dog-friendly, as are most of the other fantastic wineries in the valley.

The up-and-coming wineries of Shenedoah Valley are quickly becoming renowned for their outstanding Zinfandels in particular, as well as excellent Pinot Grigios, Syrahs, Barberas and Viogniers, among others. There are 49 wineries and vineyards to explore as a day-trip from Sacramento with your canine companion in this beautiful valley.” 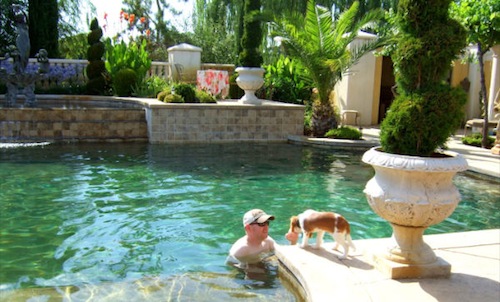 Troy and Sophie on their California trip. I need to find out where they stayed -- how rare to find a place where your pup can join you poolside! (Turns out to be the home of friends, alas for the rest of us!)

Jen and Troy have a large SturdiBag for Sophie, and it sounds as though this was its maiden voyage. It worked well for them, and being the thoughtful travelers they are, they came up with a couple of suggestions for other travelers. The first takes the idea of carrying a photo of your pup with you and combines it with the ID tag every sensible traveler puts on their bags (including an in-cabin pet carrier):

“I attended a conference recently where they had us wear those name badges that they stick in a plastic sleeve attached with a string or lanyard that you are supposed to wear around your neck. I removed the paper from the plastic sleeve and replaced it with four wallet-sized pictures of Sophie [“showing all her markings (front, each side, and top of her head and body)”]. On the back of the last photo, I put our names, Sophie’s name, and our address and phone number. I positioned that photo upside down so that when the badge was flipped up our information would appear to be right side up. I threaded the string through the plastic holder and tied that with a double bow knot to the what would be the right rear side handle attachment of her SturdiBag since I carry her on my right shoulder. I cut off the dangling string, and voila! I have a tidy, clear, ID badge on her carrier in case either she in her carrier, or just her carrier, somehow got lost. 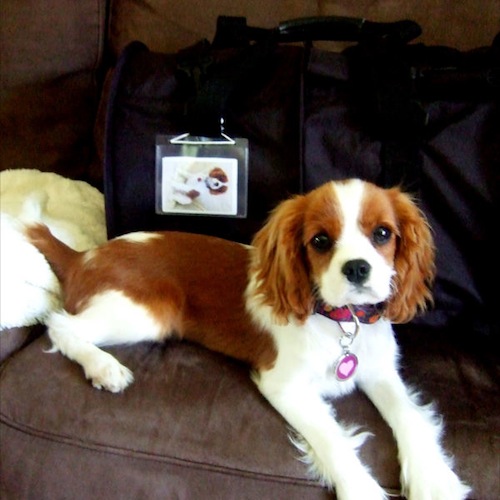 Sophie in front of her carrier, labeled with its new ID tag

The added benefit of having it visible on the outside of her carrier is that her photos are easy to just point to, or to pull out and show and satisfy anyone who really wants to ‘see the puppy’, which lots of folks, some stewardesses, one pilot, and many kids did request to do — she is just so darned cute. It saved fishing around for my wallet and then having to rifle through that, and made it easier to simply point and show folks, so our little girl could stay calm and stay sleeping as we walked through the airports and flew on the planes.”

I love this idea. I have photos of Chloe on our phone, but just when your phone is supposed to be off is when a seat mate is most likely to ask about your pup. This way, you have photos of her close at hand. Jen got her wallet-sized photos through Costco, by the way.

Jen and Troy’s second tip probably works best for owners of SturdiBag carriers, since the stiff board that stabilizes the bottom of the carrier is zipped into its own compartment below, and separate from, the pet’s area. You may recall that I’ve suggested lining your carrier with a DryFur pad, to deal with mid-flight accidents. Now that Chloe’s relatively grown-up, we no longer include the pads in our plans, but they are terrific for puppies or senior pets (and are probably a good idea if you just don’t know how your dog will handle a travel situation).

“We put the second pad from the [DryFur] 2-pack into the zipper pouch on the bottom of the SturdiBag that contains the hard, stabilizing board. That way, we had a back-up pad in if the first one ended up being used. We also put her health certificate and other Sophie records and information in the same zipper pouch on the bottom, between the extra pad and the hard foam board. We did that so her info couldn’t get separated from her and would be easy to pull out and locate if we needed to show her certificate, which we did need to do on our return flight from Sacramento. It worked beautifully, with no fumbling through bags. I was able to do it with one hand, actually, and didn’t even need to take her off my shoulder.”

Again, I love this idea. Back in the day, I stored Chloe’s back-up DryFur pad on the bottom of her compartment, below the carrier’s bottom pad, which meant that if I’d ever needed it, I would have had to remove not only the soiled pad, but also the carrier’s bottom pad and the back-up pad, which I’d then have to re-insert underneath her, DryFur pad on top. It would have been seriously awkward. Jen and Troy’s solution is neat, and I like the idea, too, of keeping your paperwork in the same compartment as the spare DryFur pad (I tuck mine in the small back pocket of our SturdiBag, but it gets rumpled there, and takes space away from her extra leash, and poop bags, and what not).

Thank you so much, Jen and Troy, for your excellent suggestions (and for your truly remarkable patience!). It is so satisfying to hear of a new solution or approach to a traveling issue — each one makes the next trip that much easier.