I have a stack of great stuff in my in-box from Dog Jaunt readers, and I’m making progress on sharing it with you. Here are two tips from a couple of fellow travelers, and one from me.

As you may already know, Chloe is crate-trained, and we carry a medium-sized version of her big metal crate with us when we travel. It occupies half of her enormous Samsonite suitcase, but I’ve never really begrudged the weight or the space — it gives her a safe place to retreat to when we’re on the road. Reader Bev (who reported on the under-seat space in a Sun Country 737) also travels with a crate for her dog, a Shih Tzu, but she prefers the hard plastic Vari-Kennel type crate. Here’s her recommendation:

“What I do is take their plastic crate that comes apart (top half and bottom half) and put it inside my suitcase — then pack my clothes inside the crate, socks, shampoo in ziploc bag, etc along the gap between crate and suitcase. If you don’t have room, considering buying a suitcase just for the crates and send it through as checked baggage…less time consuming than going to buy one when you reach your destination, but buying one at your destination is an option too.”

Bev’s dog has a sensitive stomach, by the way, so she gives her bottled water while they’re traveling, and she ships ahead a 5-lb. bag of the dog food she knows her dog likes.

Leave your old tag on your in-cabin carrier

This is an idea I’d never have thought of, because I’m one of those people who instantly pulls the airline’s tags off our suitcases as soon as they come off the carousel. Thank goodness for reader Kristine, who pointed out that if you approach a ticketing agent with a carrier that’s obviously already been accepted on a flight, the chances are better that the agent will approve it for another flight:

“After the first flight, I left the airline claim tag on the strap, so when I got to my next flight, they could see that the carrier was already on a prior flight. I’m gonna leave this tag on until we travel again and let the ticket agent remove it so there is no question — and they have no reason to try and sell me ‘their’ carrier, cause mine won’t fit.”

I love that idea, and have started implementing it myself. Chloe’s SturdiBag, currently at my feet, still has its tag from our September Southwest flight, and I’m going to leave it on there until our next flight in December. That also happens to be on Southwest, but I think the psychology would work even if our next flight was on United or one of our other preferred airlines.

Kristine included pictures of Hooper, her 8-lb. Havanese, in his large (and red!) SturdiBag carrier, under a row of Southwest seats — oriented both front-to-back and side-to-side. This is a tip I’ve posted before on Dog Jaunt’s Facebook page, but seeing Kristine’s pictures reminded me that I should post it here as well: Consider bringing along a picture of your dog in your carrier, fitting under an airline seat (preferably on the airline you’re flying on). That way, you can show a ticketing or gate agent the picture, and they can see for themselves that the carrier fits.

If you don’t already have a picture of your own, carry someone else’s picture — as long as the airline and the carrier are the same, it should be equally persuasive. Here are Kristine’s pictures, and I’ve pledged to start posting more pictures of Chloe in her carrier on the reports I file about airline under-seat spaces. 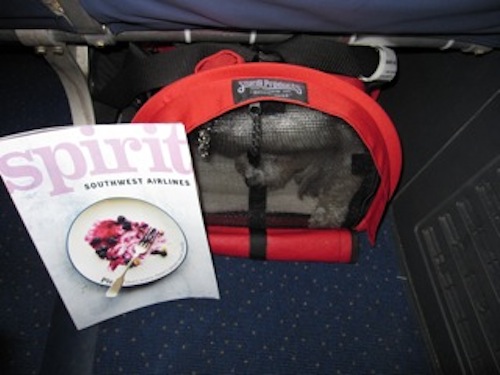 Large SturdiBag, and Hooper the Havanese, oriented front-to-back in a window seat space on a Southwest 737 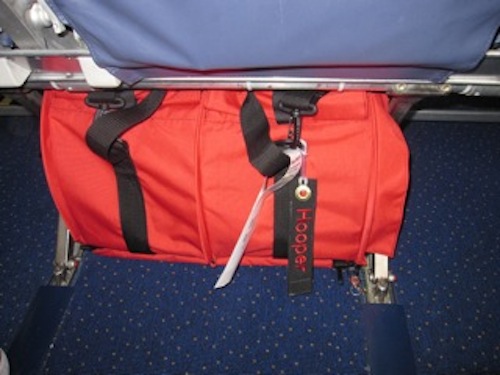 Oriented left-to-right in this picture, under a middle Southwest seat 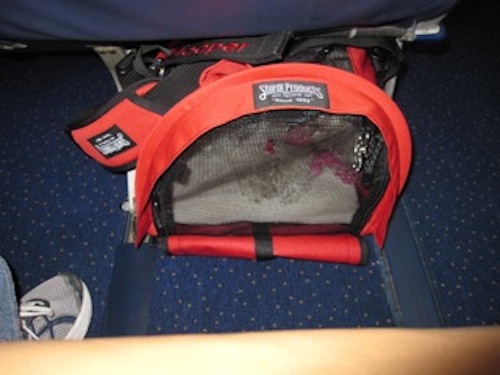