Amanda, a loyal Dog Jaunt reader, spends part of every year in the Bahamas. This year, for the first time, she and her husband took Wrigley, their 18 month-old Chihuahua/Jack Russell mix with them. Amanda very kindly sent me an e-mail about their trip, packed with good information, and (thanks, Amanda!!) said that I was welcome to share it with other Dog Jaunt readers.

It will help to know that Wrigley weighs 15 lbs., and that Amanda and her family started in Los Angeles, flew to Miami, changed planes, and continued to Marsh Harbour in the Bahamas. They flew on American Airlines, and their total travel time was 17 hours door-to-door eastbound, and 13 hours door-to-door westbound. They chose to take an overnight flight from LAX to MIA for Wrigley’s first flight, since “he’s used to being crated overnight anyway.” How sensible!

Amanda told me that she chose a large SturdiBag for Wrigley, and took the time to get him used to being in it: “We had been taking him on long drives in his SturdiBag for months before the trip, and I think his familiarity with the carrier helped a lot.” He turned out to be an excellent traveler, enduring two very long journeys “without a fuss or a whimper or a bark.”

“Though I worried that the SturdiBag was several inches taller than American’s maximum under-seat dimensions, not one ticket/gate agent or flight attendant on any of our flights batted an eye at it. Having said that, though the SturdiBag Large is a full inch shorter AND narrower than American’s maximum dimensions, it was a squeeze to get it crossway under the seats on both outgoing flights. (I think we were on a 757 for the LAX-MIA leg and an ATR 72 commuter jet from MIA-Marsh Harbour.) I’m curious to know whether others who use the SturdiBag Large stow it crossways (with the side of the container facing you) under the seat or lengthwise (with the end facing you.)”

[I’ll provide my answer, but Amanda and I would both welcome hearing from other travelers. I used to position Chloe’s carrier left-to-right (with the side facing me) under the seat in front of me, since that way it hardly projected at all into the area around my feet and didn’t attract the flight attendants’ attention. More recently — say over the past few months — I’ve been positioning it front-to-back (with the end facing me), so I can reach into the top hatch of Chloe’s large SturdiBag and pat her during take-off and landing. It makes for a uncomfortable, curled-up take-off and landing for me, but it seems to comfort Chloe. In that position, her carrier does project a few inches into the area that flight attendants like to keep clear, but so far no one has objected. I like to have the option of turning her carrier left-to-right, if a flight attendant does call me on it, so I choose seats where that would be feasible.]

Amanda sent a description of two of the pet relief areas at the Miami airport, but I’ll save those for a separate post. I wanted to share with you a lesson she learned during their first pit stop:

“Upon arrival in MIA, I rushed him outside for a potty break, leaving my husband, Tom, in the secure area with our carry-on bags. When I tried to go back through security, they asked for the receipt showing we’d paid for Wrigley to travel as a carry-on pet. Unfortunately, Tom had the receipt, and I wasn’t allowed back through security without it. So, he had to drag all the carry-on bags out in order to bring me the receipt, and we both had to clear security again. In future, we’ll tuck the receipt into the pocket of Wrigley’s carrier, so it’s always with him.”

[I’ve had a similar problem — I left my boarding pass with my husband when Chloe and I dashed out to the Las Vegas airport pet relief area — and I’m confident that neither Amanda nor I will ever do anything like it again. What a pain!]

“Before [our next] trip, we want to train Wrigley to use pee pads. We’ll always schedule enough time between flights to allow a potty break in the airport’s relief area. But if a flight were delayed, or we were stuck in the secure area or on a plane (as happened when we arrived back in L.A.!), it would be reassuring to know Wrigley would still get a chance to do his business.”

And here’s another lesson learned — this one, I’ve never encountered:

“When leaving L.A., we were charged $175 to bring Wrigley on the plane. I told the ticket agent this was higher than I was quoted when I booked the flights, but she just shrugged and said rates had increased. On our return trip, however, we were only charged $125. When I compared receipts from the two transactions, I realized the L.A. ticket agent had charged us the ‘checked pet’ rate — which is $50 more than the ‘carry-on pet’ rate. We’ve begun the process of applying for a refund, but in future we’ll definitely print a copy of the airline’s pet policy/charges from their website and bring it with us.”

“On the return flights out of Marsh Harbour and Miami, it was sweltering on the planes while we were on the ground. And though Wrigley survived it all, it was far from ideal. Next trip, I’ll carry one of those tiny, hand-held fans to help keep him cool. (If you or your readers have any other suggestions, let me know!)”

Was it worth it? Amanda’s report was joyous, despite a mishap just before they returned home:

“Once we arrived at our final destination, Green Turtle Cay, Wrigley quickly settled in, and he had a wonderful three weeks! As with most of the Bahamian out islands, Green Turtle Cay is very laid back, and many restaurants have outdoor dining areas, so we could take Wrigley virtually everywhere. He loved being able to run off-leash on the beach, though several times he got distracted by birds, etc., and ran off. He always came back, but we’ll definitely be working more on the ‘come’ command before our next trip. He adored playing and digging on the beach, riding around in a golf cart, and meeting other dogs. 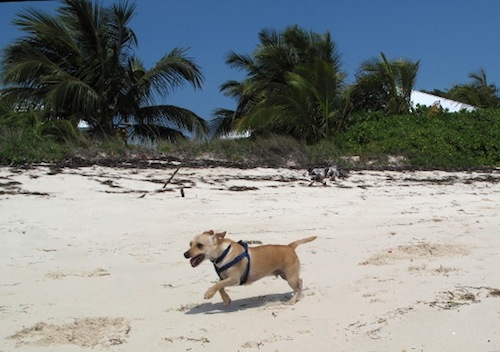 Sadly, Wrigley’s fun ended two days before the end of our trip, when he took a nasty spill off our golf cart. He was yelping and obviously in distress, so we scooped him up in a towel and rushed him to the nearest vet, who was a 20-minute ferry ride and a 30-minute drive away. Thankfully, we’d researched the closest vet before our trip, so we knew exactly where to go, and we were able to get Wrigley to the vet within an hour and fifteen minutes of the accident.”

There is a happy ending: “Wrigley suffered no major injuries or broken bones – just a sprained elbow. The vet prescribed some pain medication and two weeks of crate rest. Now, two weeks later, he’s still limping a little, but is clearly feeling much better.” Amanda and Tom and Wrigley are already planning their next trip, up the West Coast to Vancouver.