Once you get the routine down, it’s easy for those of us with small dogs (say, under 10 lbs.) to fly together in-cabin. Heck, it’s pretty straightforward to fly with a biggish small dog like Chloe, who weighs between 13 and 15 lbs. and measures 12″ tall at her shoulders — though on a number of occasions I’ve had to be a vigorous advocate for the large SturdiBag carrier. But what about those of us who fly with even bigger small dogs?

When I get messages asking about flying with pups who weigh more than 15 lbs., or who are taller and longer than Chloe, I point them to two Dog Jaunt posts: The first is based on reader Joanna’s report about traveling with her 26 lb. Corgi, and the second is about a photo sent by reader Adam of his XL SturdiBag carrier in use. A goodly part of the usefulness of the first post are the comments on it that other readers have posted, including some that Adam posted about transporting Oliver, his Cocker Spaniel, in an XL SturdiBag. As you’ll see if you scroll through the comments, he met with some resistance from the United ticketing agent in Paris — and the way he handled it was instructive to me, and helpful to other travelers with “too large” pets.

I was delighted, therefore, to hear again from Adam after a recent round of flights on Southwest Airlines with Oliver, still using the XL SturdiBag. In one direction (their return flight), they had no issues whatever. They checked in, they boarded the plane, they flew, end of story. Their trip from NYC’s LaGuardia airport to the Midwest, however, was a whole different story — and really demonstrates how your traveling experience will vary depending on the individuals you encounter. [The important thing to know as you read this is that Adam has traveled before with Oliver in the XL SturdiBag, and is comfortable in his mind that Oliver is comfortable during their flights. Adam is a concerned and careful owner, and would not squash his pup into a spot that doesn’t work for him.]

This was holiday travel, Adam reminded me, so “LaGuardia was a zoo…and the ticket agent didn’t even look at my carrier!  The gate agent was another story altogether, following me onto the plane and telling the flight attendant, ‘This man’s bag is too large. If you’re doing your job, do NOT let him on.’ Man, it is so hard to keep your cool in those situations, with your heart beating a million miles a minute.”

However, “The flight attendant was so very friendly and told the gate agent, ‘I’m certain this passenger knows his dog better than you do.’ The agent left in a huff, and the flight attendant said, ‘Do what you gotta do buddy,’ with a wink.”

Wait a second, I wrote to Adam — back it up, there! How on Earth did you get past the gate agent, to the point where you could interact with the flight attendant? It turns out he had anticipated an issue (“The gate agent announced that it was a full flight, and we should be prepared to gate check items that were larger — he was scrutinizing each and every individual, looking at their bag to verify it was small”), had handed over his boarding pass, and was already past the gate agent when the interaction began:

“When I went through, he called and said, ‘STOP SIR!’

‘What’s inside though?’ he asked.

‘Oh, it’s my pet bag,’ I said nonchalantly. ‘I know it looks a little big, but the roof flexes, see?’ I added, demonstrating accordingly.

He went on to ask me how big the dog was, told me I couldn’t just ‘smoosh’ him under the seat, yada yada yada. He went on for a while, and said, ‘You know if the flight attendant has an issue, you won’t be allowed to board.’

I just said, ‘Yes sir, I understand completely.’ I may have fudged the details and told him I had flown on Southwest recently, and whipped out the picture of Oliver under an airplane seat last year.

At this point, the man wasn’t really budging…so I simply told him firmly not to worry, and walked away from him down the gangway! That is why he ultimately followed me onto the plane, although I didn’t realize he had chosen to chase me down. It’s kind of funny, as I’m generally very meek when in everyday life, and I don’t like to push back against customer service professionals…in this instance, I simply realized that I had no real choice. The flight attendant ultimately took my side, and that was the end of it.”

There are many reasons why this worked. Southwest Airlines’ under-seat spaces are generous. Adam knew that his carrier would flex to fit, and that Oliver would be comfortable in the resulting space. He was confident and resolute, but polite. He made sure that he got to the right arbiter — the flight attendant, who knows the airplane best. He had a photo of the XL SturdiBag in action on another flight.

If you’re a first-time flyer, how do you get that fundamentally important confidence that your larger pup will in fact fit on the plane, and will be comfortable in the space available to her? Look at the measurements that are available — by now, Dog Jaunt has a pretty good list going — and mock up a space that size. Buy a carrier that flexes — I don’t know of any more flexible carrier than the SturdiBag (and I assure you that I’m still not on retainer by SturdiProducts — when, oh, when will they call me?!). Insert your pup, and try fitting the loaded carrier in the available space. Keep in mind that she’ll need to be entirely under the seat in front of you only during takeoff and landing — during the rest of the flight, you can pull her carrier out a bit, into your foot area.

Bookmark pictures of an XL SturdiBag in action — there’s one in the second post I mentioned above, from a past flight by Adam, and Adam attached two more to his current report, which I’m providing below. Take a picture of your own, once you’re on your flight, and keep it on your phone for quick reference in the future.

And good luck! Adam and I agreed “that no particular airline or its employees are more ‘pet friendly’ than the others. My ticketing agent was friendly and wonderful…the gate agent was really rough with me…but the flight attendant was as kind as could be. I have learned that it is simply a question of pushing back as politely as possible and hoping for the best.”

Here are the pictures Adam sent me: 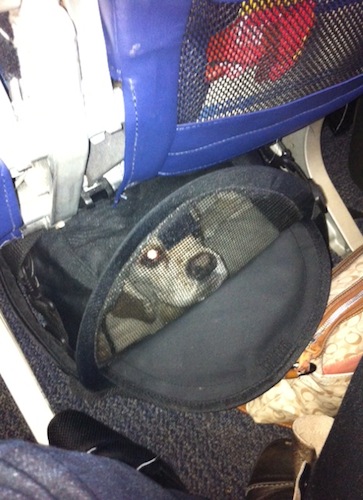 From one angle, with Oliver visible. 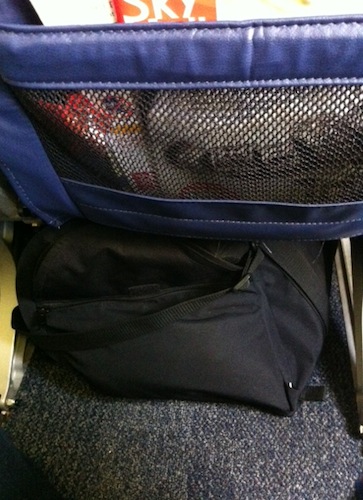 From another angle. The surprising thing to me, in both these pictures, is how little of the bag is poking out into the foot area -- it looks way better on Southwest than it did on the United flight Adam and Oliver took together.

As you might already have figured out, he chose the middle seat, “as I knew the width was the largest on the 737-700 plane…in all honesty, I think Oliver’s bag would likely have fit under any of the three seats.” His verdict? “It was actually a pretty comfortable fit (well, as comfortable as the XL gets, anyway.) I can’t have seen even the fussiest flight attendant having taken issue with the bag in its place.”

Thank you, Adam!! The people with the larger small dogs are the most anxious about travel, I’ve learned, and the more information I can get into their hands, the better. Reports like this are priceless. Thank you, too, for setting such an excellent example of politeness and perseverance under stress.