Chloe’s a small dog, but her suitcase is the biggest one we own. When we’re dealing with travel logistics, my husband and I complain bitterly; when we’re rational, however, we both realize that a 32″ suitcase isn’t that bad, considering that it contains her housing, bedding, dishes, food, and grooming and clean-up supplies. (You’ve seen Dog Jaunt’s travel checklist and packing list — we never travel with all of that stuff, but even a portion of it occupies a lot of space.)

We used to fit all of Chloe’s gear into a 28″ suitcase bought at Tuesday Morning (such a deal!), but she’s lost respect for the Creature Leisure Den that was her first travel crate, and now we have to pack something sturdier. Sturdier means larger, unfortunately: The collapsible wire crate that fits her best, a medium iCrate from Midwest, is 30Lx19wx21H (for shorter trips, we pack the next size down, which is 24″L). That’s too big for her old suitcase, so we went shopping. We chose a Samsonite Cosmolite 32″ Spinner suitcase because it’s hard-sided (the metal crate needs more protection than the Den) and light (we’re still shooting for under 50 lbs., and the metal crate is no lightweight). It was astonishingly expensive, but I hope to get years of use out of it.

So here’s how it works:

On one side of the suitcase, we pack two crate pads, topped with any other soft goods we’re carrying (for example, a fleece blanket, a couple of dog jackets, and the crate cover). I’d also normally add her ShamWow towels, and plenty of them, to the heap, plus an old sheet to keep dog hair off hotel beds. 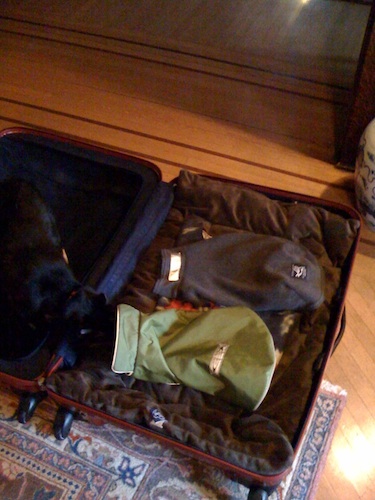 The collapsed metal crate rests on top, protected by the soft goods and elevated by them to the widest part of the suitcase (which is a good thing, since the crate only just fits). 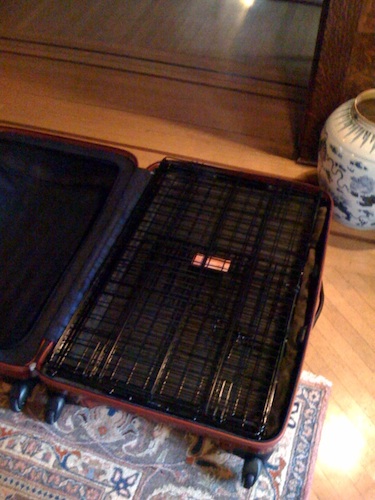 Now with the collapsed metal crate on top

10/25/10 To date, we’ve mainly used her 24″ long wire crate, even though the 30″ long one does fit. The smaller crate is lighter, and we’re always flirting with the 50 lb. weight limit as it is. We center the small crate in the right side of the suitcase, and put two rolled-up sheets and the rolled-up crate cover around the edges. To protect the mesh on the other side of the suitcase from the crate, we put one of the crate pads on top of the crate. Here’s what her suitcase looks like with the smaller crate inside: 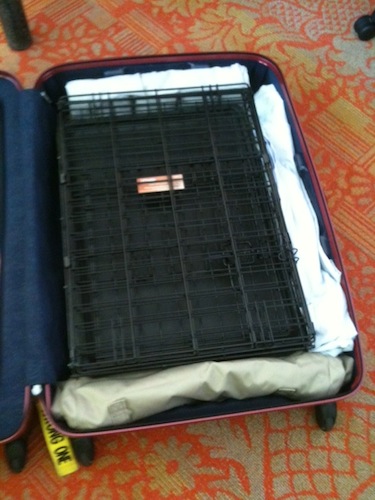 The last crate pad goes on top, but it's off to the side right now

The other side of the suitcase holds Chloe’s messenger bag, for use once we get to where we’re going (it’s not a good airplane carrier, but it’s an invaluable stealth bag), as well as Chloe’s tote (which holds her food, grooming and cleaning supplies, treats, toys, leashes, etc., etc.) For travel, we typically put the tote in one of those vast, XL-sized bags that Ziploc came out with for home organization, but it wouldn’t photograph so well in a plastic bag. That side of the suitcase has a zippered mesh cover, which also helps to keep the gear in Chloe’s tote from moving around. 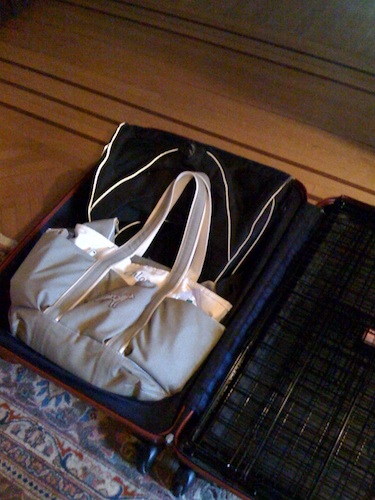 Messenger bag and Chloe's tote go on the other side

I pack a few essential supplies in my carry-on bag (including a couple of meals, treats, chews, poop bags, a water bottle and collapsible travel bowl), so that if Chloe’s suitcase goes astray we can make do until it’s located.