Reader Rafael posted this content on Dog Jaunt’s Facebook page, and I immediately asked if I could turn it into a blog post, so it wouldn’t just scroll away into oblivion. I thought there would be many of you who would appreciate hearing how he prepared his pup Chuck Norris to spend extended periods of time in an in-cabin carrier, and how they handled a long international flight together.

Some background: Chuck Norris is a kaninchen Dachshund (slightly smaller than a miniature Dachshund), “not crate-trained per se” (“He slept in his crate but during the day he was always free to wander around”), and with “anxiety issues when left alone. He was also a bit of a barker, especially when it comes to people approaching an area that he considers ‘his.'” Rafael and his wife wanted to visit family in Raleigh, NC (they live in Oslo), and they wanted to take Chuck Norris with them. They flew on United. 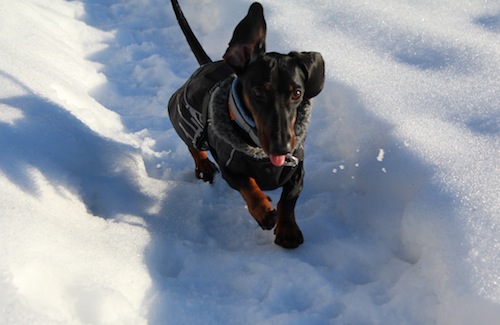 Chuck Norris in the snow

Preparing Chuck Norris to spend time in his carrier

Make that “a heck of a lot of time in his carrier” — the outbound trip was 14 hours, and the return trip was 16 hours. I love everything about what Rafael did, so I’ll just let him take over.

“Our process began about 2 months before the trip. I began putting him in his crate for small periods using positive reinforcement (clicker) and slowly increasing the time. Once he was able to be there for about 15 mins, I kept him crated every time we ate (breakfast, lunch and dinner), placing him at my feet like he would be on the plane, and continuously reinforcing him. After about 1 month of daily training, he was able to be inside his crate for about 3 hours without any issues.

We got a large SturdiBag as recommended by several of Dog Jaunt’s readers. The bag is awesome but very uncomfortable to carry over the shoulder for a long time. I was a bit worried because the size was a couple of inches wider than the ‘official’ size on United’s website and I was scared it would not fit under the seat. However, following the recommendation of trimming the one inch off from each side of the base worked like a charm.

During the last month of training, Chuck was making great progress. He was able to be inside the SturdiBag for 4 hours and was quite relaxed (sleeping mostly, no whining). HE WAS ALWAYS AT MY FEET DURING HIS TRAINING, I had him with me while sitting on the computer mostly. I never left him alone while he was on his bag because I did not want him to associate being alone and anxious with being in it.

We enforced the command ‘Go to your house,’ so he would go in by himself and enjoy it. Two weeks before our departure, we took small trips (around 1 hr) on trains and placed him under the seat for training. The first couple of times he was whining and growling at the people walking through the aisles, but by the second trip he was all better.”

Tips for long international flights with an in-cabin dog

Here too, there’s a ton of useful advice. I’ve highlighted Rafael’s many great tips. The only one I don’t/won’t follow is sitting in the way-back of the plane: It was a good choice for Rafael and his family, but I think the extra engine noise rattles Chloe, so we choose to sit near the front (in front of the engines and the wheels). After a flight or two, you’ll decide what’s best for you and your pup.

“The day arrived and I was incredibly anxious. Our total travel time would be around 14 hours, from the time we put him in the crate until we actually let him out. I should add, I was also traveling with my 26-week pregnant wife! I woke up at 4 am and took Chuck for a walk for about one hour and tried that he would not fall asleep until we were on the plane.

I had bought an airline-approved bag from United when I made my reservation, just in case they said that my SturdiBag was too big. They never checked the size of Chuck’s bag, and also, they did not have my bag. So, important advice here: IF YOU BUY A BAG FROM THE AIRLINE, DOUBLE, TRIPLE CHECK THAT THEY WILL HAVE IT FOR YOU. Apparently there are only some airports where they offer them.

I should add that I do not think it is a good idea anyway, as it is very important that the dog is used to HIS crate.

We put shirts we had worn inside the bag so he would have a familiar smell with him all the time. We also packed his favorite snacks and toys.

After check-in, we took him for a small walk outside so he would pee one last time and put him inside. Show time.

At the gate he was still accepting my treats, which for me meant that he was still calm. Boarding time came and here I made my first mistake: I left the front shade open, so he would be able to see what was going on…eventually, a flight attendant peeked into the bag to say hi and Chuck started barking like crazy. I felt all my training was going down the drain and that he would be like that the whole trip…. [If you know your pup is likely to dislike attention, however kindly-meant, from strangers, get a carrier with privacy panels and use them.]

During take-off I had my hand inside the bag (over the top window) and offered him his favorite treats…. He did not accept them as he seemed pretty worked-up. Chuck eventually calmed down, but did not accept my treats anymore.

We chose two seats all the way in the back for 2 reasons:

1. My pregnant wife and her need to pee every 5 secs. 🙂
2. Engine noise is louder in the back, so less chance for people to hear him if he whined and for him to hear the people.

That was a smart choice…Chuck was softly whining for about 5 hours. Nobody could hear him, but it was heartbreaking for me as I thought he was miserable in there. He was also scratching the shade and at one point managed to push it hard enough to almost escape!! That would have been bad, which brings me to another tip: ALWAYS, ALWAYS, PUT BOTH [of the SturdiBag] ZIPPERS ALL THE WAY TO EITHER SIDE. IF YOU MAKE THEM MEET IN THE MIDDLE, THE DOG CAN PUSH THE SHADE UNTIL ONE OF THE ZIPPERS GETS LOOSE AND SLIDES DOWN.

Chuck stopped crying and accepting food when I took off my shoes and pushed my feet against the door, so he knew I was there. But mostly, he stopped crying when I directed some air into where he was. I think the poor guy had little air during all that time and that is why he was crying! So another piece of advice: TRY DIRECTING THE A/C TO YOUR LEGS SO HE GETS SOME FRESH AIR CONSTANTLY.

I put my hand into the bag with an ice cube from time to time so he could have a bit of water (but not so much that he would need to pee).

We eventually made it to the US and Chuck was still whining from time to time. We had to stand in line for like an extra hour, so this time I had all the screens closed in his bag but put my hand under one of them so he could still know I was close. Rocking the bag also seemed to calm him down.

We took him out to the pet relief area in Newark, and played with him until it was time to take the flight to Raleigh. At this point, all my training paid off: He voluntarily went into the bag again and seemed pretty happy to do so. He had been in there for the past 10 hours, and still…

While we were at the gate waiting for our Raleigh flight, we fed him his favorite food and he ate it in no time. The second plane was smaller (United Express), but the bag fit perfectly.

In this second flight he was amazing…no whining, no scratching, nothing…

On our way back to Oslo, Chuck was incredible, even though we had to be stuck on the plane for 2 more extra hours making it a total of 16 hours trip. I think this was due to 2 things:

1. The flight was at nighttime, so he basically slept the whole flight. The one from Oslo to Newark happened in the middle of the day. So my advice is that if you are making really long trips, try to take one at the times that the dog is used to sleep.

2. We took a 2 hour walk before leaving for the airport. He was really tired!!

My final advice would be to be patient with your dog and try not to stress so much as I did…I am sure he felt that I was super stressed and that made it worse. Finally, knowing your dog, and how he reacts to similar situations can take some of the pressure off. Our train rides really helped, and they gave us an excuse to get out of the city for a couple of days :).

Rafael concluded by saying that they “had an incredible time in the US with our family and the rest of the dogs,” and that while “it was incredibly stressful for me, I cannot imagine a better outcome. I would not do it again though, unless it is absolutely necessary. But if I have to, I know how to handle him.” He said they “were super lucky that [Chuck] was so good,” and of course they were — but they also made their own luck by working really hard to make the experience as comfortable as possible for their pup. I am just overcome with admiration for Rafael, and for his generosity in sharing this information with other Dog Jaunt readers.