Simone first wrote to me back in April, to tell me that she was planning to take Spock, her 14-15 lb. Cavalier King Charles Spaniel, from Miami to Berlin, via Frankfurt, on Lufthansa, and needed a pep talk about logistics. I cheered her on, and asked if she’d let me know how her trip went — and sure enough, she sent a marvelous report, packed with pictures of Spock in Berlin.

A little background: Spock was 8 months old in April, so he was just shy of a year old when they traveled in July. It was his first time flying. Simone bought him a large SturdiBag, and she “put him in for all our car travels and to go to stores etc. to have him comfortable with it.” The first leg of their trip (Miami to Frankfurt) was on a Lufthansa A380, and their second leg was on a “smaller plane.”  As you’ll see, by the time they flew, Spock weighed 17 lbs.

Checking in at the Miami airport

Simone was concerned that Spock + carrier would be too heavy for Lufthansa (which has an official 17.6 lb./8 kg. maximum for in-cabin dogs). I suggested that she take the shoulder strap off her carrier, and to take everything else optional off, and out of, the bag (pocket contents, ID tag, hard foam “floor”), before he was weighed (if, indeed, it turned out that he was weighed — it doesn’t always happen). The large SturdiBag weighs 3 lbs., so I hoped that, trimmed to a minimum, the whole assemblage would squeak through.

Here’s what happened: “At Miami airport Lufthansa check-in I placed the SturdiBag with Spock on the scale and held on to the handles keeping it steady at 7.5 kg. Got the approved in-cabin luggage sticker and paid my $100.” Wait a moment, I said — tell me more about the part where you held onto the handles! Turns out that Spock + carrier was a little over the limit, so Simone had to fudge a bit:

“During weighing I had a sweater on top of the bag , so of course I had to hold on to the handles of the bag so my ‘heavy’ sweater wouldn’t collapse the bag…. I did let go for a bit when the agent walked away and it was 21 lbs, about 4 lbs over the allowed weight. But frankly I don’t think they cared.”

On the plane (inc. under-seat space on a Lufthansa A-380)

Simone and Spock (and Simone’s daughter — thank goodness, as you’ll see in a moment) had Economy seats on their A-380. Given her description, they were either in Seats A&B or J&K (here’s a floor map of a Lufthansa A-380 for your reference). Economy is usually a workable choice for travelers with pets, but not this time:

“The surprise came inside the plane. It’s an A380, largest plane everywhere … But there is no way to fit any type of dog, with or without carrier under an economy seat. The space is about 10” high but there is the life vest under every seat which takes up about 2.5” — plus window and middle seat have an electrical box of some sort that are taking up most of the leftover space…..

The SturdiBag did fit in the foot space with determined shoving and my legs were crossed in a skinny way to the middle seat (my daughter sat there). The good thing was, nobody cared…. I had a newspaper opened to cover the fact that the legroom was completely occupied by the puppy bag but I don’t think it mattered….

The flight Frankfurt /Berlin was easy, smaller plane, plenty of room for large SturdiBag even with life vest.”

I’ve seen someone camouflage a too-large carrier with an artistically-draped shawl, but this is the first time I’ve heard of a traveler getting away with an entire carrier out in the foot space. Impressive use of a newspaper, Simone! I’ll be avoiding those seats, myself, since my nerves aren’t what they used to be.

That was the only worrisome part of the trip, since it turns out that Spock is an excellent traveler: “Spock slept through most of all the flights and just woke up to sample the on board dinner (yum — a little mashed potatoes and gravy are always welcome).”

At the Frankfurt and Berlin Tegel airports

Simone report that the Frankfurt airport (FRA) has “no pet relief area but they have huge private bathrooms for families and babies and even showers so I occupied a family room for 20 minutes but Spock didn’t use the peepee pad but waited till we stepped outside Berlin airport [TXL] to pee. That airport is the best, you have to keep your dog on a leash and that’s all the restriction there. Pet relief area not needed since you can step out to the curb easy until you go to the boarding area.” 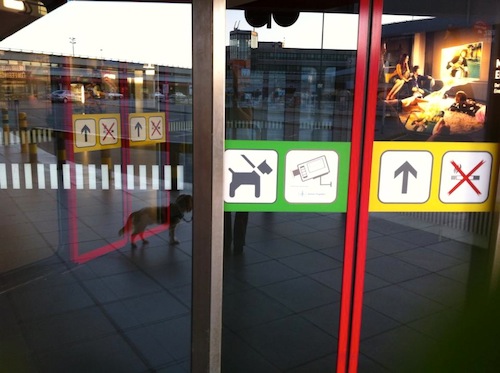 I love this shot from the Berlin Tegel airport not only because the sign on the door indicates that leashed dogs are allowed inside (so rare!) but also because you can see the reflection of leashed Spock (just to the left of the dog sign)

The payoff: Doing stuff together in Berlin

This is the part that really thrills me. Simone was a worried woman before she left (“Am I too anxious? Probably but it’s giving me nightmares…”) — and she’s such a happy one now:

“Berlin is the perfect city for dog lovers. In the restaurants and pubs dogs are not just welcome but waiters even ask if they can bring a bowl of water for the pooch. Everywhere! Only grocery stores prohibit dogs. So there was plenty of shopping possible from shoe stores to Ikea and boutiques — as long as your dog is leashed and behaves reasonably well, no problem.

We went on the subway and the public bus and due to Spock’s size (17 lbs.) he didn’t need to buy a ticket.

We visited some nice castles but just from the outside and enjoyed the castle gardens and parks.

I can’t wait to go again. Thank you for your valuable tips and reassurance. It was very helpful. I love taking my puppy everywhere!”

I love taking my puppy everywhere — isn’t that what it’s all about? Here are Simone’s pictures from their trip: 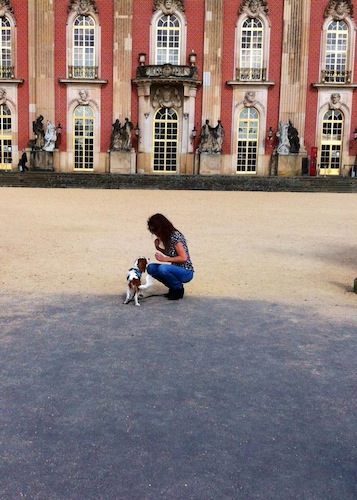 With Spock at the Neues Palais, in Potsdam’s Sanssouci Park 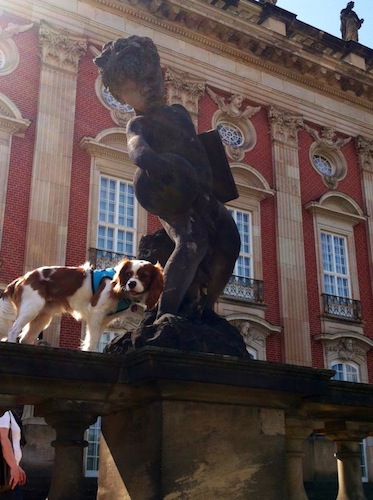 Simone points out that the putto “is holding a globe and a book. Very fitting for the world traveler!” 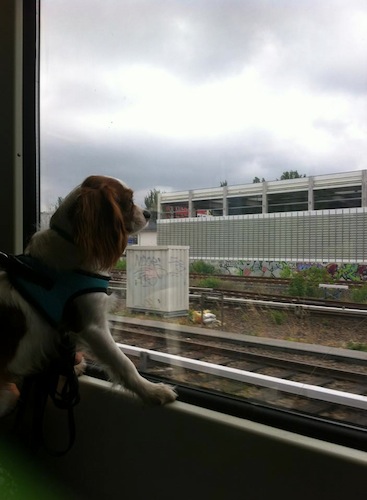 Spock on the subway, I’m guessing 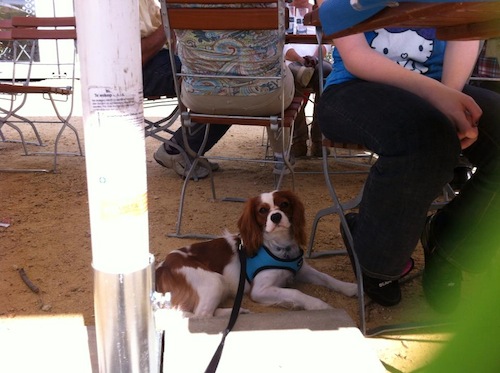 Spock hanging out with his people at a café

Simone even included a scoop law sign for me — and one to cherish, since that pup is clearly a spaniel (look at the ears and floofy tail!): 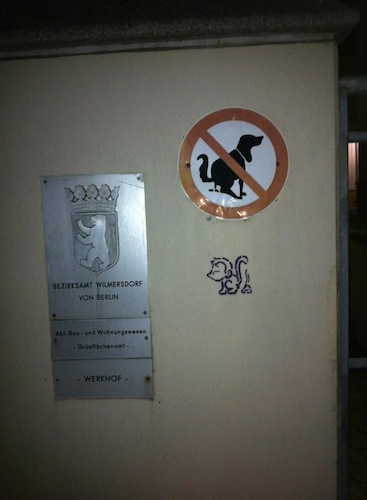 I’ll leave you, though, with the iconic shot of Berlin: 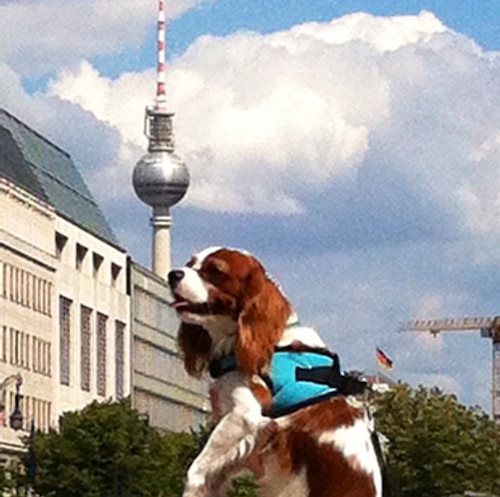 Thank you so much, Simone, for the great info and all the wonderful pictures! Please do keep us in mind on your future trips to Berlin — we’ll always want to see what you and Spock get to do there together, and your tips are so appreciated. I’m adding this post to Dog Jaunt’s ongoing series recording under-seat plane measurements.