Dublin’s public transit is a mixed bag, from the standpoint of pet-friendliness. Put briefly, if you have a small dog, you will do well on commuter rail, the DART coastal train, and intercity trains; and you can likely get around by bus. Bigger dogs will face challenges and charges, and no pet dogs are allowed on LUAS (light rail).

Here are more details, with links to the services and to their pet policies:

Dublin Bus operates an extensive network of routes in and around the city. The site is silent about pets, so I sent an e-mail on 7/24/16, and received the following reply: “All guide dogs and assistance dogs are permitted on all of Dublin Bus services however it is up to the discretion of the driver to decide whether any other dog is allowed to board the bus.” My guess is that a small dog in a carrier would be a shoo-in; a small dog on a leash but carried in arms would more likely than not be okay; and larger, leashed dogs have to roll the dice. 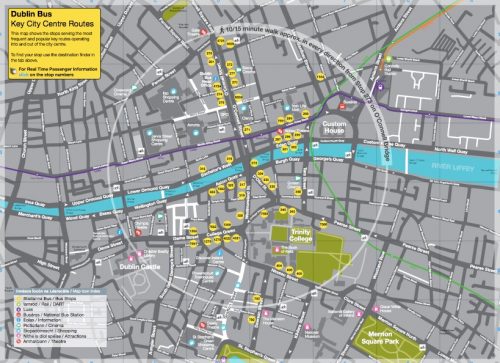 LUAS operates two light rail/tram lines (the Red Line and the Green Line, currently unconnected, but they’re working on that). Hopefully they’ll also work on their pet policy, which is currently non-existent: “No animals are allowed on board with the exception of guide dogs.”

DART (“Dublin Area Rapid Transit”) is a coastal train, operated by Irish Rail (Iarnród Éireann), that runs from Howth and Malahide in the north to Greystones in the south. It’s the green line on this map of Dublin-area trains [PDF]. On the same map are shown a number of commuter rail lines, also operated by Irish Rail, and of course Irish Rail has a network of intercity trains.

Overall, Irish Rail’s pet policy is good for pets small enough to travel on their owners’ laps, either leashed or in a carrier, but tricky for larger dogs. Irish Rail’s site does not make it clear, however, whether that same policy applies to commuter rail and DART trains. I wrote to Irish Rail asking if the pet policies on those lines are the same as Irish Rail’s pet policy for intercity trains, and on 8/4/16 I received a reply that essentially said yes, the policies are the same: “Small dogs can be carried free of charge in the passenger compartment of services provided they travel on the owners lap. Guide dogs and Assistance dogs are permitted to travel on all Iarnród Éireann services without restriction. Accompanied dogs, other than those described above, can only be conveyed on Intercity services in a Guards Van (non-passenger compartment) if available (e.g. Dublin/Cork and Dublin/Belfast services only). Charges will apply. You can find more information on travelling with pets at http://www.irishrail.ie/travel-information/travelling-with-animals”

Speaking of intercity transportation, Bus Éireann operates a fleet of intercity buses; alas, as with the United States’ Greyhound bus line, the iconic dog logo does not mean that pet dogs are welcome on board.