My heartfelt thanks to reader Anja, who gathered in one relatively short e-mail a wealth of useful information about her recent SWISS (formerly Swiss Air) flight from Zurich to New York’s JFK airport with Dr. Pepper, her Poodle — including real-life info about traveling via SWISS, under seat space on a SWISS Airbus A330-300, and the location and condition of JFK’s outdoor pet relief area at Terminal 4. Here’s her report:

Taking an in-cabin dog on SWISS

“My dog is a very very tall small [Poodle]. He’s almost 15” tall and about the same length, but he’s very skinny and only weighs just under 15 pounds. He fits nicely into the large Sturdibag, although he can’t stand up in it. But he can lie down comfortably and turn around if he wants to. The large Sturdibag itself in terms of size is perfectly within Swiss’ limits. [Here’s the link to SWISS’s pet policy page.] The weight restriction on Swiss incl. carrier is 17.6 lbs, so he’s quite borderline, but no one at the airport in Zurich cared — they didn’t even want to see him, let alone weigh him. I have heard other stories, though.

Swiss has designated seats for people traveling with pets so you don’t get to choose — I had an aisle seat in the very back of the airplane (Airbus 330-300).” [Editor’s note: Here’s a seat map for the SWISS A330-300, courtesy of SeatGuru. According to the comments, the electronics box is under Seat A, so it’s my belief that Anja was in an aisle Seat B, on the left side of the plane — say somewhere in the Row 42-45 region.]

“As you can see in the pictures though, [the large SturdiBag] doesn’t totally fit under the seat. Width is fine, height is ok too — just need to scrunch it down a little, but it sticks out quite a bit in the front. But again, no one cared. [Sitting in the back of the plane] does take away a lot of your leg room, but I didn’t mind — I was happy I got my pooch on the airplane.” 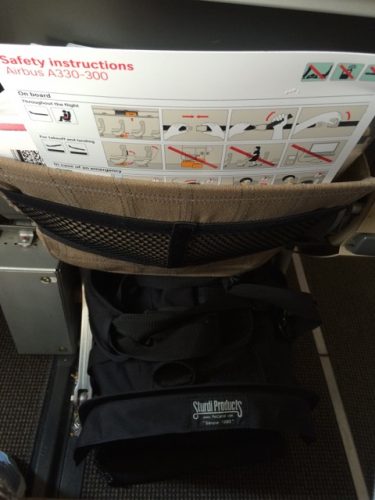 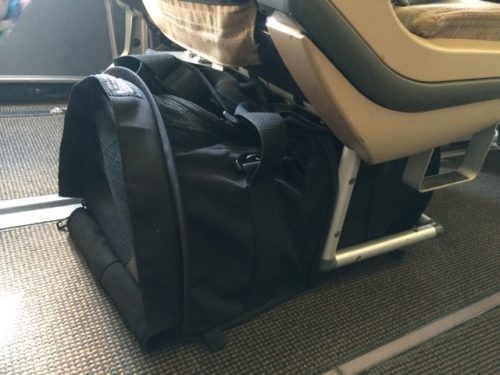 And from the side — that is indeed sticking out a bit more than one would like. Darn those rails!

Arriving at JFK with an in-cabin pet

“Customs and immigration at JFK was a breeze. I checked the box on the customs form that said I had an animal with me, but no one seemed to care. They didn’t ask me any questions, didn’t want to see health certificates — I’m not sure they even realized I had a dog with me. They just waved me right through.”

“Once we got to JFK I wasn’t sure what to expect re pet relief area and as it turns out it wasn’t great — but ok. This was at Terminal 4, where most international flights come in I believe.

It’s very well marked and easy to find, right outside the exit to the right. Once you got through immigration and customs, follow the exit signs to the right and there is a sign for their pet relief area. 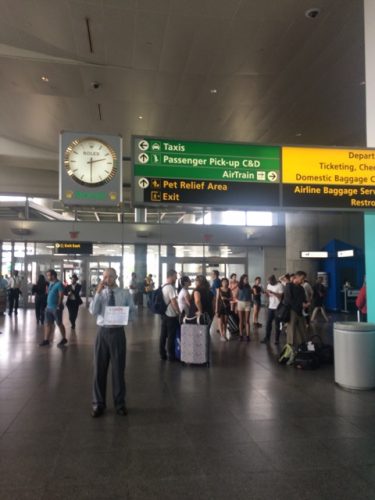 Signage for the outdoor pet relief area at JFK’s Terminal 4.

Once you’re out of the building, turn right again, and you’ll see another sign and the pet relief area behind it. 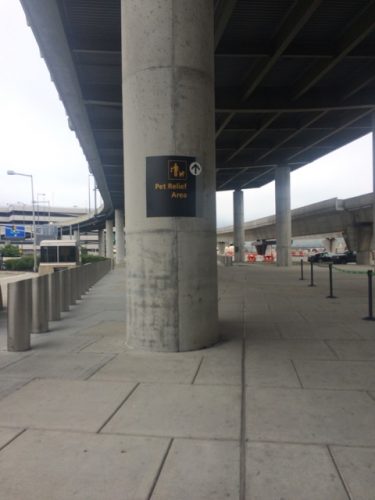 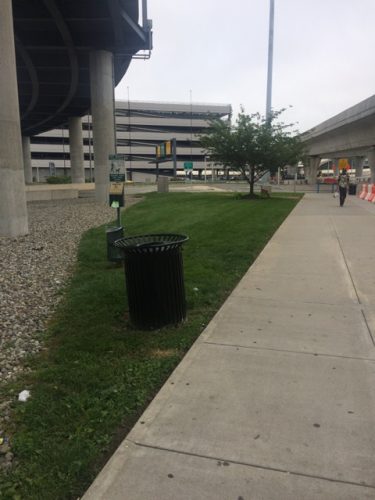 The pet relief area itself. Poop bags, trash can, but no fence, water source, or bench (alas!).

It’s not fenced, so it’s better to keep the dogs leashed, but there are poop bags there and a trash can. It wasn’t the cleanest, however.”

For me, SWISS has always been the airline that offers to stow your in-cabin pet in the overhead compartment if you’re traveling in Business or First Class on an Airbus 330/340 (“The crew will put the transport container in the wardrobe, in an overhead locker, or under an Economy Class seat for takeoff and landing”) — a dismaying thought. It is a relief to hear that in practice, it’s as straightforward as any other airline. Thanks again to Anja for sharing info that will make travel easier for other folks with in-cabin pets! I’m adding this post to a variety of Dog Jaunt resources, including underseat measurements, pictures of pet carriers on planes, and info about pet relief areas.