I’d never flown on a 767 before, and I still can’t decide, two days later, what I thought of the experience. What I do know is that getting a seat in at least Economy Plus is crucial for an international flight with a pet: I walked past the Economy seats on my trip to the bathroom, and the pitch was something terrible. I don’t think I could have managed to reach down to Chloe in the space available.

Happily, I was in Seat 19A, in the first Economy Plus row that works for pets (Row 17 has a bulkhead in front of it, and the spaces under the Row 18 seats are entirely occupied by gigantic boxes). The configuration (here’s a SeatGuru map so you can follow along) in the back end of the plane was 2-3-2 (and please note that we were in a two-class 767-300 — there was no separate First Class). The pairs of seats have a shared under-seat space that’s 33” wide. As you can see in this picture, I oriented Chloe’s carrier left-to-right in the space for take-off and landing: 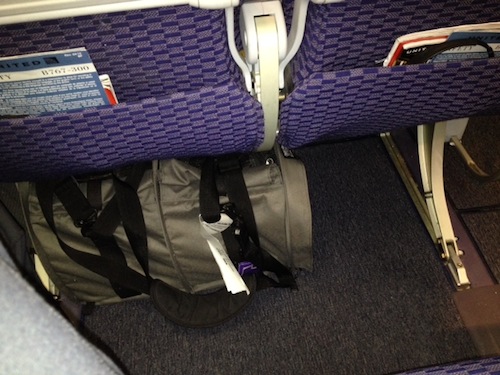 Remember to discount the flange on the front of the large SturdiBag, since it’s not structural. The carrier ended up poking about an inch into my neighbor’s space, but he kindly pooh-poohed my apologies — and as soon as we took off, I turned the carrier 90 degrees.

That’s because I had to: The under-seat space in Economy and Economy Plus is essentially wedge-shaped, and complicated, on both sides of the plane, by an electronics box. At the deepest point under the seat (just behind the heels of the person in front of you), the available space is 7.5” tall. At the front of the space (that is, in the plane continuous with your stowed tray table), the available space is 13” tall. That slope is consistent across the shared under-seat spaces of the pairs of seats, except that it’s interrupted in the middle by an electronics box (occupying, more precisely, the area 14”-17″ from the wall of the plane, and 0”-6” from the heels of the people in front of you).

The large SturdiBag worked well because its top, rounded like a Quonset hut, tucked nicely into the wedge-shaped space. Our large Kobi carrier would also have worked well, but a carrier with square shoulders (like our Sleepypod Air, or our Delta Deluxe Sherpa carrier) would have stuck our more into the foot area — though, looking at my picture, I think not so much that a flight attendant would have objected.

That same wedge-shaped under-seat space was consistent across the center three seats too, but those seats did not seem to have any electronics boxes under them. The plane was filling up, so I didn’t have the chance to get precise measurements, but as you’ll see in this photo, all three spaces are very wide. Chloe’s large SturdiBag would have fit comfortably (again, oriented left-to-right) in any of them. 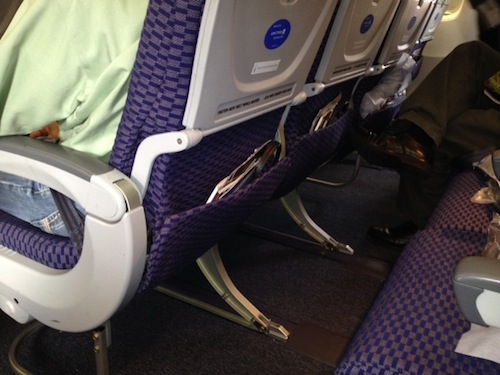 These are the under-seat spaces for Seats 19D, E, and F.

I’m adding this to Dog Jaunt’s ongoing series of posts recording airplane under-seat measurements, and I’m tagging it so it appears in Dog Jaunt’s ever-growing collection of pictures of carriers deployed under plane seats.