We fly on Virgin America several times a year, but always, to date, on one of their Airbus 320 planes, never on an A-319. In fact, I’d concluded they only had A-320s, so my tape measure was well of out reach when I saw the A-319 emergency card. Here’s what I used as an alternative, which proves that where there’s a will, there’s a way: 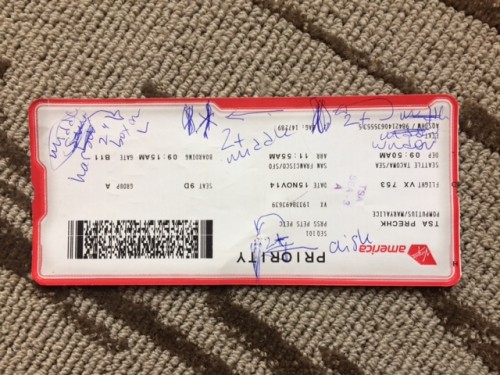 That middle hieroglyphic, for example, means that the middle seat space was 2 card-widths wide PLUS up to that bold line (nope, x-ed out, actually the bold line NEXT to it). I’ve had resourceful readers tell me how many of their foot lengths a space was. You work with the materials at hand.

As with the A-320, there are three seats on each side of the aisle (here’s a seat chart from SeatGuru so you can follow along). On this particular flight, at least, the extra legroom of the Main Cabin Select seats wasn’t available to me, since those seats (the emergency row and the bulkhead row behind First Class) can’t accommodate an under-seat pet. I was in a normal Economy seat (I’d reserved 9D for these pictures, but ended up in a middle seat; on the return trip, we were in aisle seat 14D). Both worked just fine, even though I was giving a whole new carrier (the Teafco Argo Petagon, slightly larger than Chloe’s usual SturdiBag) its shakedown cruise.

The width of the aisle seat space is 18 1/4″. The middle seat space is wider — just shy of 19.5″ wide — but it has a 2″ box attached to one of its sidewalls. The window seat space is narrower, at a hair over 17″ wide. All three spaces are 9 1/4″ tall, and all three have a hard plastic box on their “ceilings” for life jackets. Normally, I’m leery of aisle seats, but this time it was the best of the available choices.

Here’s Chloe in her Teafco Argo Petagon carrier, which I’ll review in a separate post. For the purposes of this post, it’s enough to say that the carrier is 21″ long, and about 13″ tall (though that’s a bit misleading — its top is not rigidly supported, and squashes downwards). 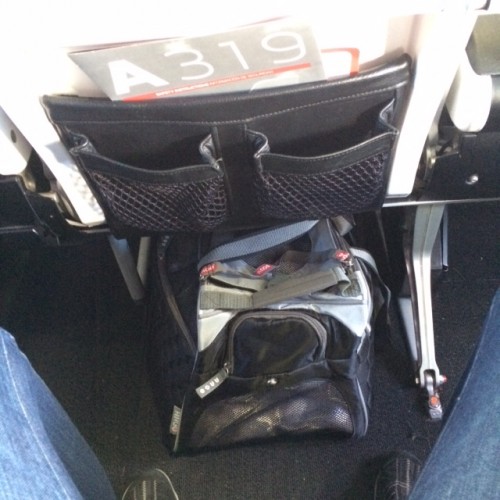 I keep looking from this picture to Chloe, currently asleep on my hotel bed, and back, trying to pattern-match the fur bits visible through the mesh. Could that be her forehead? 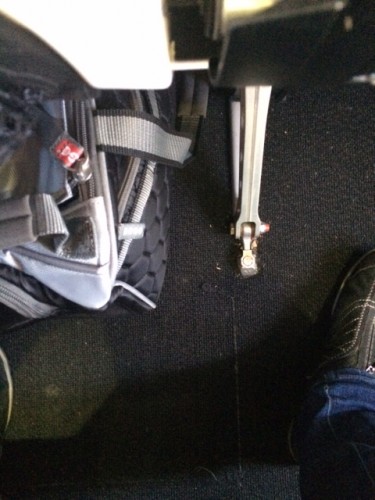 A close-up shot, so you can see the relationship of the end of the carrier to the seat support — like I say, the Petagon is a long carrier, but it fit surprisingly well.

I’m adding this post to Dog Jaunt’s ongoing series of posts recording airplane under-seat measurements, and tagging it so it appears in Dog Jaunt’s ever-growing collection of pictures of carriers deployed under plane seats.