Delta has many, many versions of this plane, but I believe we flew on this particular configuration (seat plan courtesy of SeatGuru), with the Delta Comfort+ seats starting at Row 18, cattywampus to the bathroom (an unusually pleasant one, with — how brilliant — rounded doors, giving you the pleasant illusion of having more space).

In recent years, I’ve shunned Delta. Their seat pitch had become ludicrously small for me, and crippling for my husband, so in a grand gesture, I spent all of our remaining Delta miles on First Class seats on some really short flight, and plighted my troth to United. But the years have rolled on, and Delta does have a direct flight from Seattle to New York, and they’ve added leg room back in — for a price, of course — with their Delta Comfort+ seats. (Buy them, I urge you. The extra room makes it possible to reach down and pat your dog, or give her ice cubes or water, or pull her carrier out a bit from under the seat in front of you.) 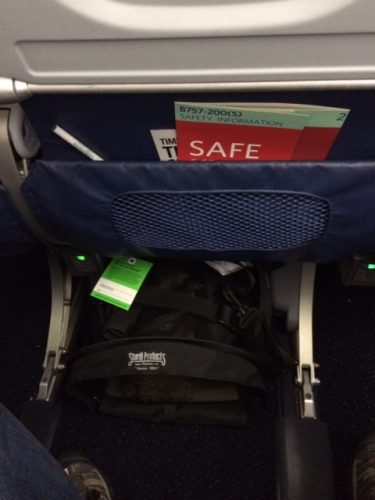 Chloe, tucked in under a Delta Comfort+ seat on a B757-200(75S) plane. Please note the boxes to the left and right of her carrier (the one on the left has a green light). The middle seat worked, but either of the other seats would have been better.

Not knowing anything about this particular plane, we took a chance on the middle seat. More often than not, a middle seat is a good choice for a traveler with a pet, but, it turns out, not this time. We managed it (yet again, the rounded and flexible top of Chloe’s large SturdiBag saved the day), but the window seat would have been best, and the aisle seat would have been my second choice.