You’ve met Ralph the Bichon a couple of times now, since his person Anne has kindly allowed me to post pictures from his trips to France. Anne was also the source of a really sensible travel ID tag solution involving an e-mail address that generates an automatic (and infinitely customizable) reply. This July, she wrote to me from Paris with a recommendation for a dog groomer she turned to when Ralph got a glob of gunk stuck in his paw. I’m glad to share her report with you, because finding a good groomer is as tricky as finding a good veterinarian (and in this case, it turns out, the groomer had tools the vet didn’t have).

On a July day about two weeks into their trip, “the temperature hit 92 by mid-afternoon. We were at ‘home’ about 5:30 pm when I noticed that a tar-like gunk was embedded in one of Ralph’s paws. He was totally nonchalant until I tried to remove it; he squealed and the stuff only wiggled. It was really gross — black, thick, and flecked with tiny stones. Hoping there was an easy way to soak it out, I called our groomer in NYC, who said it would need to be cut out.”

Anne took Ralph to Dr. McCarthy, the vet I took Chloe to last fall, and while the experience was positive, his office didn’t have the right tool for the job: “The assistant agreed it would need to be cut out but — lifting a pair of round-tipped scissors longer than Ralph’s leg — said she hadn’t the right equipment and suggested we go to a groomer.”

Anne had already visited Au Paradis Canin earlier in the trip “to pick up shampoo (I had to forget something),” so she knew it was close by. She returned, and groomer Caroline Coutret, “whose English is excellent, remembered Ralph. She looked at his paw, announced (in French) ‘chewing gum,’ and grabbed a clipper from the wall. Three minutes later, the gunk was gone. Caroline refused to take any money. ‘C’est normal,’ she shrugged. So I bought Ralph a toy: on the hottest day of July, he picked a squeaky, bouncy Santa Claus.” 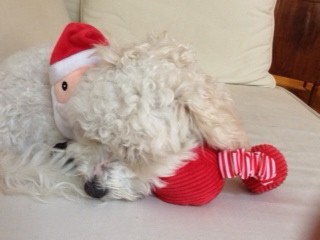 A happy ending (“Ralph is fine, I’m relieved, and Caroline is the best”) and a really useful addition to your list of Paris pet resources. Looking back through old posts, it turns out that Chloe and I have been to Le Paradis Canin, but only as shoppers. I’m delighted to learn about Caroline and her grooming skills, kindness, and fluency in English. Thanks, Anne!