Remember the photo I posted, one Friday, of Ralph the Bichon/Cavalier dressed for his upcoming trip to Paris? Reader Anne sent pictures from their visit, along with details about her solution for keeping Ralph’s ID current while they were out of the country.

The first news I got from Anne was that they had used the pet relief area at JFK’s Terminal 4, and that when they boarded their plane (a Delta Airbus 330-200, which has a 2-4-2 seat configuration), she found that her window seat, with Ralph underneath, was next to “a nice man…with a cat.”

Apparently all went well with that, and with the fit of Ralph’s carrier, too, since I didn’t hear anything more about the flight. Anne’s plan had been to buy the “official” Delta Sherpa carrier (please note that Ralph is a 13 lb. Bichon/Cavalier mix).

Here’s their first photo from Paris, of Ralph at a café, “hoping for crumbs”: 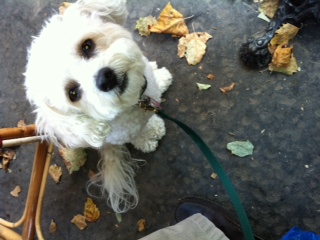 And here’s another picture showing, dagnabbit, that too many of Paris’s small parks are not dog-friendly: 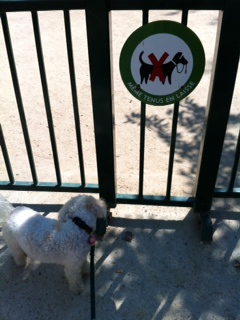 “Ralph doesn’t understand why he can’t go in,” Anne wrote (the text on the sign means “even on a leash”)

One of the tags you see on Ralph’s collar is new. It says “Ralph de NYC” and includes a dedicated e-mail address. When you send that address a message, you get a reply with the title “My name is Ralph and I’m probably lost/Je m’appelle Ralph et je suis probablement perdu.” Here’s what the message says:

“Hello. I am Ralph, a 5-kilo Bichon/Cavalier dog. My owner is Anne [last name]. We are visiting Paris. It is my first time here and I don’t speak French. Anne speaks only a little. Anne is worried about me. Please call her ASAP at [cell phone number]. We are staying at [Paris address, including local phone number]. There is a big reward for my safe return.

I love how the text is in both English and French, and how it’s written very simply — reminding a finder not only that Ralph is a helpless pup but also that French is not Anne’s first language. And getting a dedicated e-mail address is a simpler business, too, than getting a URL for a dedicated web-site. Another reader, Sarah, sent a detailed report about how to do this kind of thing (perhaps Anne saw it and was inspired? I forgot to ask her).

So was bringing Ralph to Paris a good idea? Anne said it all with her last note to me, which concluded, “Been fascinating being here with Ralph. It’s as if he’s a special stamp in my passport.”

Thank you so much, Anne, for the photos and the details about Ralph’s ID tag! It’s messages like yours — even more than my own posts, I believe — that convince other people to give this dog travel thing a try.