I remember first photographing these Dachshund-shaped signs (cryptically instructing dog owners to make their dogs eliminate on the street instead of the sidewalk) with my trusty Instamatic, 35 years ago. Lady, our own Dachshund, was still alive then, so I was extra-charmed — and impressed by the suggestion that it was possible to get a Dachshund to do anything she didn’t choose to do. 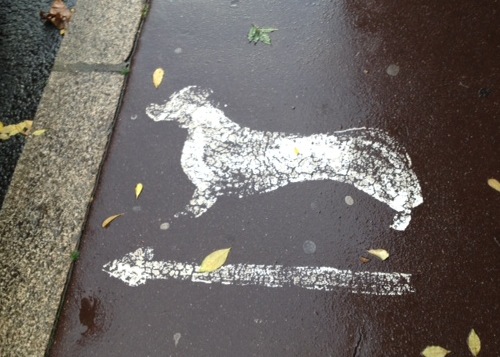 A little worn, a little faded — and oh, the melancholy of the fallen leaves. If this isn’t a moment for a cigarette and an absinthe, nothing is.

They’re few and far between now. Sometime in the past decade, they were joined by this, um, terrier, and now even he is looking a little decrepit. 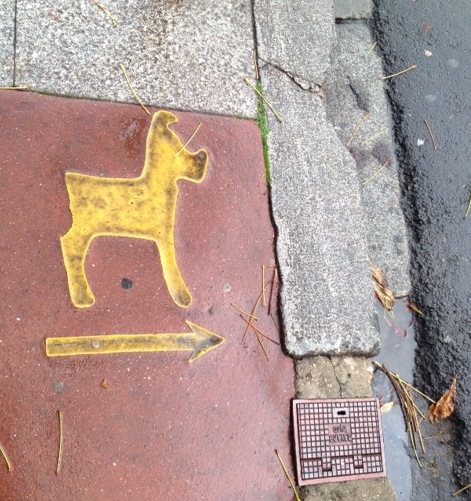 This one has lost his back end, for one thing — a take-home lesson that decals are not as long-lasting as paint

Much good they do — Paris is by no means carpeted with dog poop, as I’d feared when I trolled around the Web before this visit, but the poop you see is more often on the sidewalk than it is in the gutter. Between the traffic and the parked cars and the gutter sluicing (a frequent and, to a visitor, unpredictable occurrence), I don’t see a future for the curbing campaign.

Paris is certainly trying to get the notion of scooping across to its citizenry. We spotted a bus ad going by, too rapidly to photograph, but it featured a woman and dog walking away from a pile of poop, while a service worker magically appears from a street fountain with a hose (the text says “we can do our best, but not the impossible”). The street signs include the “Je ramasse” sign you’ve already seen, joined by at least a couple of others: 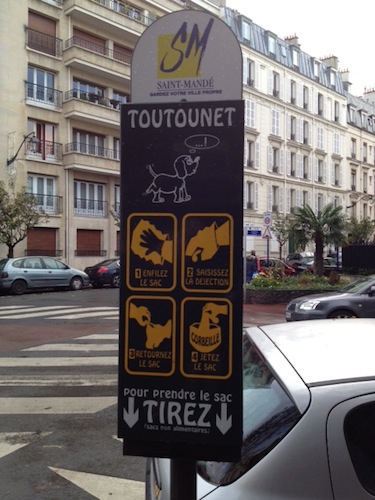 A severely practical sign from the district/municipality of Saint-Mandé 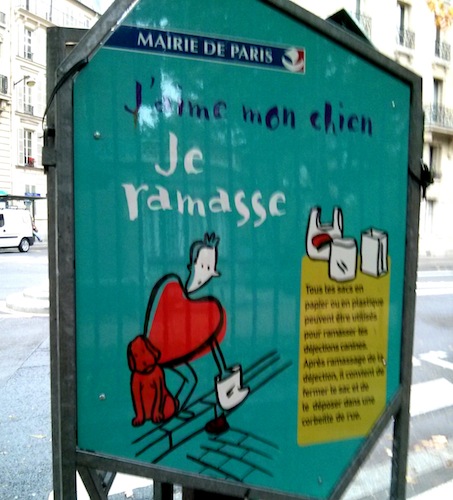 A bit blurry, but you can tell that it clings, endearingly, to the notion that your pup will poop in the gutter

This last sign is in the same series, clearly, as an extremely odd one sent to me months ago by Naomi, but the whimsy has been dialed back — no Eiffel Tower fascinator this time, and the text is a primer on How To Scoop: “Tous les sacs en papier ou en plastique peuvent être utilisés pour ramasser les déjections canines. Après ramassage de la déjection, il convient de fermer le sac et de le déposer dans une corbeille de rue.”